“Edward Tulane” Kicks Off New Season for The Minnesota Opera 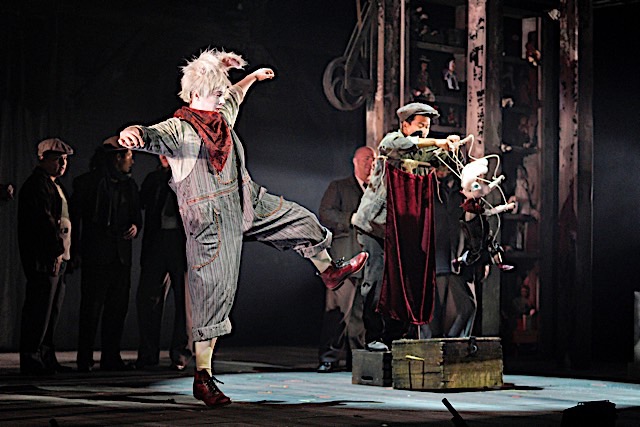 Minnesota Opera just opened its 2022-2023 season, and we are off to a great start. The long-awaited world premiere of “Edward Tulane” finally made its way to the stage in St. Paul this October and everything about the show suggests that we are in for a strong opera season.

The opening of “Edward Tulane” was a milestone for many reasons. It is a world premiere. It has a Minnesota connection (Kate DiCamillo, the author of the 2006 book, The Miraculous Journey of Edward Tulane, is based out of Minnesota). It is also largely considered kid-friendly since the story follows the life of a stuffed rabbit.

It was fun to see kids at the opera, but in case my tentative language hasn’t already tipped you off, I think it is a bit of a stretch to call “Edward Tulane” kid-friendly. The pacing of the show is deliberate, the humor is generally grown up, and it takes significant suspension of disbelief to imagine that the adults playing the first several children are not adults. The presence of a man in a rabbit costume does very little to mitigate that, charming though he may be.

I happened to sit next to a kid during the performance – he was maybe around ten years old – and although he didn’t fidget or complain, he also never laughed and barely responded to his adult’s stage whispers. She exclaimed over twists and turns in the plot as poor Edward Tulane bounced from one loving home after another and the kid barely nodded or shrugged in response.

That said, I found the opera delightful and would recommend it in heartbeat. I might even play the hypocrite and bring a niece or a nephew along if Edward Tulane ever returned to Minnesota. After all, the kid I sat next to could easily have been having a blast but respected the theater too much to squirm in his seat.

The costumes and set design in “Edward Tulane” are perhaps the best part of what is an overall very strong show. Delightfully, there is an actual stuffed rabbit that actor Jack Swanson follows around. Dressed in rabbit ears, face paint, and whatever costume the rabbit is currently wearing, Swanson helps bring the stuffed rabbit to life without ever letting us forget that Edward is a stuffed rabbit.

At the top of the show, Edward Tulane’s first owner is told a fairy tale by her grandmother and a cast of brightly colored, geometrical characters emerge to help tell it: a prince encaged in cardboard armor, a king that is just an oversized head, and a princess in bright orange spandex (speaking of which, I have a bone to pick with whoever made that incongruous choice.) There is also an incredibly fun scene in a doll shop in which every performer holds a doll version of themselves. Sitting in tiers as though displayed on shelves, the stage fairly explodes with the color of the life-sized dolls and every last mini-me. Another scene takes place underwater – an oversized Edward Tulane towers over the stage as he sits at the bottom of the ocean, surrounded by darkly hued fish accented with strips of colorful lights. It is stunning, weird, and lovely.

Of course, the performances were incredible. The orchestra was strong, and the vocalists had both classically beautiful and silly moments of music in which to play vocally. Brian Vu as Bryce, Jasmine Habersham as Sarah Ruth, Lisa Marie Rogali as the dog, and Zachary James as the witch, were favorites of mine.

I would be remiss not to also mention that part of why this premiere felt so special: “Edward Tulane” was supposed to premiere in March 2020. The original premiere was canceled due to the pandemic and now, two and a half years later, it has finally made its way back to the stage. It feels good, albeit different, to be back in a theater. Many of us are wearing masks. Several of the conversations I overheard in the lobby centered around the last time people saw an opera live or other concerts and performances that have been rescheduled after pandemic-related cancellations. But it is so good to not only be back, but also to finally see a show that was delayed for years.

If you missed out on “Edward Tulane,” worry not! That show was only the first of an exciting season. Minnesota Opera has two more shows at the Ordway and two at the Luminary Arts Center.

Next at the Ordway we can look forward to “The Daughter of the Regiment” (February 4-12). It is fair to call this 1840 opera a romantic comedy. Unbeknownst to the soldiers around her, the canteen girl is an aristocrat – what will happen when her past catches up to her? Will the love she has found in a villager survive the revelation of her true lineage?

Also at the Ordway is “Don Giovanni” (May 6-21). This opera is, of course, a classic. Written by Mozart in 1787 with a libretto by Lorenzo Da Ponte, this tale of a womanizer who suffers the consequences of his debauchery is comedic, dark, and maybe a little cathartic.

The Luminary Arts Center is featuring two shows this year: “Rinaldo” and “The Song Poet.” For the unfamiliar, this former warehouse was converted into the Lab Theater by The Guthrie in 1988. In 2019 Minnesota Opera acquired the space and this season marks the first performances in the historic building.

“Rinaldo” (November 19-December 3) is another classic: written by Handel in 1711, this Italian Opera is a love story full of magic and peppered with war. The show is as heart-warming as it is hilarious.

Minnesota Opera is putting in the work to ensure that its values of diversity and equity are visible on the stage and in the background. The institution continues to showcase classic, beloved shows, but the inclusion of new operas like “Edward Tulane” and “The Song Poet” along with intentional casting bodes well for an amazing year of opera.