Eat the Menu: Sooki It to Me 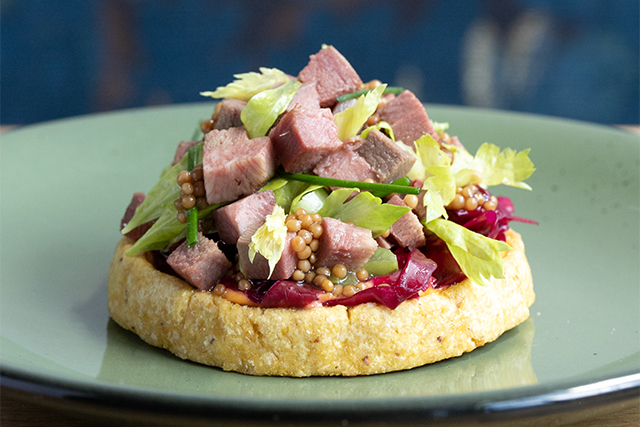 The Korean-born and Minnesota-bred restaurateur’s first entry into the local dining scene was Pizzeria Lola. It was followed by the immediately iconic Young Joni, and skyrocketed this winter with the opening of Sooki & Mimi, occupying the former Lucia’s footprint in Uptown. It’s drawing lots of the previous cafe’s devotees, plus Kim’s own avid following.

The space has been given a major makeover indeed. Think of a gracious Asian tea house—lots and lots of warm wood, live plants as a room divider, a fieldstone wall—plus a vast new window wall that unites it to the street scene. Closely spaced tables enhance a spirit of vivacity without intrusion in neighbors’ conversations. And a corps of well-trained servers stands ready to explain or recommend.

Kim’s prix-fixe menu ($55) provides four choices within each of its three courses. In many, she blends the cuisine of her native land with her adopted love of the foodstuffs of Mexico—in particular, corn. The standout smoked lengua sope stars in the first course selections. Built upon a sturdy masa base that’s the essence of sweet corn flavor, it holds small-diced squares of tender tongue, positioned amid sauerkraut, celery and a zingy toss of pickled mustard seeds—smoky, briny, tangy: all pulled together with a chipotle-like burst of morita, flavoring its aioli.

The Frida salad offered an inviting toss of greens and grilled radicchio brightened with moist chunks of cucumber, all flavored with smoked labneh (yogurt) and Middle-Eastern dukkah. They’re arranged upon a schmear of sweetly nutty cashew tahini and festooned with half a soft-boiled egg—an easygoing dish to set one’s palate up for the rest of the meal. (Or choose a gravlax tostada or the cooling veggie toss of aguachile naranja.)

Now the choices get harder. Do I yearn for the mole almendrado? Or the tamal, saluting summer squash? Yes! Oh, but wait—the green chorizo potstickers! The hominy grits!

On to the finale: a quartet of tacos. But these four fillings spotlight original combos not found south of the border. Squash tacos loaded with Brussels sprouts, pepitas and apples, anyone? Or our choice, those shells boasting a savory filling of Japanese maitake mushrooms mingling with queso Chihuahua, and a rich shiitake crema. Or—talk about fusion—the beef bulgogi number in which flour tortillas, this time, envelop tender, long-cooked beef, along with pickled cukes and carrots moistened with a zippy kimchi crema, all decorated with scallions and sesame—definitely a winner.

Guests can add family-style courses that include a whole fish ($45) or a half five-spice duck ($50), sided with tortillas rather than the customary pancakes. Or, if they’re of stronger stuff than I, dessert items like a Bosc pear bar or Korean sweet-potato mocha doughnuts—which broke my heart to turn down as I hoisted the white flag of surrender.