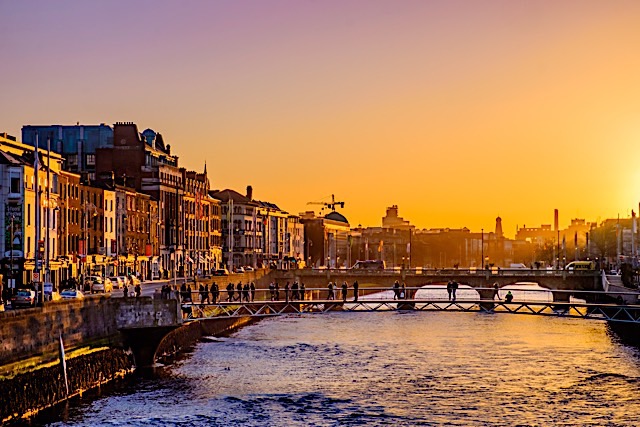 Drink was to be expected. No one has ever accused the Irish of being a dour, teetotaling race. The whiskey proved excellent, the beer was unsurpassed. But the food!

That’s people’s greatest surprise when visiting Ireland. Today’s visitors are in for a pleasant awakening. No gray cabbage and overcooked potatoes. Gone is the soggy Irish strew. Corned beef? Sorry. Ten years ago, you couldn’t even find garlic in many a grocery store. Now, you can see fresh herbs and wild mushrooms in even the smallest towns.

The wherewithal has always been there, from tender lamb, fresh seafood, artisanal cheeses and sturdy oats to, yes, those very cabbages and potatoes. But these days, they’re handled with exacting kitchen techniques and a new sense of adventure. The dining scene has come of age, marrying traditional foods with up-to-the-minute combinations and presentations, as proven in Dublin’s destination dining rooms.

The Winding Stair, on the bank of the River Liffey, represents the quintessential crowded bookstore on street level, while above it, climbing that winding stair, diners discover homey starters such as potted rabbit with chicory and apple salad sided with walnut toast, or pate of smoked hake attended by red and golden beets, pea shoots, caper berries and a spritz of lemon. Continue with Frazer’s chicken stuffed with Irish cheese and broccoli, served with kale and bacon-blessed spuds with pickled plum gravy. Or steamed cockles and Roony Bay mussels (sing along, now) with Clogherhead crab, brown shrimp and mayo toasts. Finally, the quintessential sticky-ginger cake, dolled up with pears.

Head up nearby O’Connell Street to elite and intimate Chapter One, whose proprietor gratefully lists his artisanal procurers on his menu, which leads off with a duo of mackerel—cured and smoked rilletes, sided with potato pancakes. Or rabbit terrine with sweet-and-sour pears, foie gras parfait and pickled mustard seeds. The brave and hardy may continue with pig’s tail stuffed with Fingal Ferguson’s bacon and Dublin Bay prawns. And for dessert, a lavender and strawberry tea ice cream bar with fermented lemon curd and salted hazelnut mousse topped with rye bread crumbs.

Meanwhile, Thornton’s anchors the upscale dining space in Hotel Fitzwilliam, bordering the Eden called St. Stephen’s Green, the back yard of the city. Here, nip into the chef’s Salter Island scallops with black kale puree and shrimp mousse, his wild turbot, or roast Wicklow deer. Gourmands scramble for a room in this ultra-convenient and elegant hotel, where Concierge Tony greets guests (well, at least this one) with hugs and kisses and pops hard-to-get dinner reservations out of a hat.

Peploe’s, just around the corner and one of Dublin’s premier wine bars, depicts customers, from Luciano Pavarotti to Bill Clinton, on its wall mural. Did they enjoy the

carpaccio with artichokes and Parm, as I did, one wonders? The fish pie of smoked haddock, Dublin Bay prawns and crab claws? Or the roast loin of wild Irish venison blanketed in pancetta with wild mushroom salsa? Certainly the chocolate tart with whiskey and brown bread ice cream, maize tuile and chocolate cream!

Service there, as everywhere, surpasses that in most American cities—informed, personal and unhurried. When I complimented the owner about my waitress, he offered the logical explanation: “Well, she’s Irish, y’know.”

Bang, a few strides further along the green, sets off culinary fireworks indeed in its intimate, minimalist-chic digs, starting the show with a pig’s head croquette, served with cabbage kimchi and black garlic aioli. Then it’s on to black pudding with apple and lardo. Or perhaps the celeriac soup, also abetted with black pudding. I inhaled my order of rich, rich oxtail and bone marrow gnocchi, then continued with salt marsh duck breast brightened with beet puree, licorice (okay, that didn’t work) and Fior di latte.

For “dessert,” I waddled a few doors on to my favorite pub in the ’hood, O’Donaghue’s, where pop-up groups gather nightly to twiddle Irish tunes with their guitars, squeeze boxes, pipe whistles, whatever, while we sip our Guinness. When answering “Minnesota” when asked from where I’d come, the locals all responded, “Garrison Keillor!” (Speaking of lifting a Guinness: that brewery is the most-visited site in all Dublin. Tours end in the rooftop Gravity Bar with a free pint and a 360-view of the city.)

Bubbly Aoife McElwaine led a tasty tramp called the Fab Food Trail (www.fabulousfoodtrails.ie) —eight visits starting with Sheridan, a cheesemonger who regales the excellent quality of Irish milk as we munch on samples of Coolea (similar to Gouda) and Malveen, a soft, washed-rind variety. Pepperpot, in the posh Powerscourt mansion-turned-shopping mecca, offers us farm-smoked salmon. After a swig of silky Powers 12-year whiskey in the ultra-Victorian Swan Bar—original marble and brass— it’s on to The George’s Street Arcade and a hearty sausage roll, a “guaranteed” hangover cure. Cocoa Atelier provides 20 varieties of handmade chocolates; then a raw oyster down the hatch at Temple Bar’s Market.

Time for some serious eating, and the Shelbourne Hotel’s swank Saddle Room is a super place to start, from house-cured Castletownbere salmon and Kilmore Quay cod with creamed leeks and cauliflower puree on to bread-and-butter pudding swathed in caramelized pears. Avenue by Nick Munier, going contempo and up-tempo in Temple Bar, swears by its Hartys oysters (and so do I), which made way for scallops atop squash puree with citrus foam; then its famous 60-day dry-aged smoked rib of beef.

But where’s the fish & chips, you ask? Alive and batter-coated at pubs like Wuff on one side of the Liffey and on the other, Davy Byrne’s—the pub where Leopold Bloom hangs out in Joyce’s famed “Ulysses.”

Come see for yourself! For more information, visit www.tourismireland.com.