Deep Fried Everything On A Stick and More 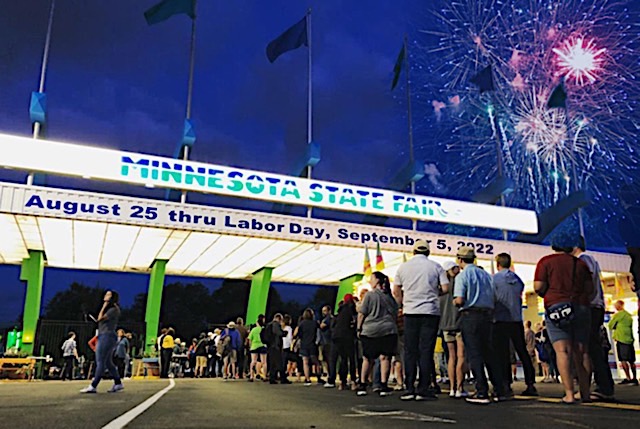 Heat waves shimmering above asphalt and concrete, dust motes shining and floating in the streaming sunlight, raised upward by the tread of thousands of feet, the heady scent of multitudes of vats filled with cooking oil and frying batter-coated delicacies, children shrieking with laughter on the giant slide and whirling sky swings, the cacophony of voices from the midway, horses neighing, cows mooing….it can only be that glorious highlight of the summer season, those twelve golden days that cap off the end of August known as the Minnesota State Fair.

The State Fair is just around the corner, and the excitement is ramping up for the eager thousands who will be streaming through the ticket gates every day yearning to dig into a bucket of Sweet Martha’s cookies, devour Pronto Pups and sample deep-fried-everything-on-a-stick until the sun goes down and the last notes from the Grandstand concerts die away.

One might think that the Fair would appeal only to rural out-staters, FFA kids, and folks wanting to gorge on fried food and then making themselves sick on the Midway rides, but nothing could be further from the truth. The Great Minnesota Get Together offers an eye-popping array of activities, crafts, art, food, music, competitions, shopping, interactive learning, and family fun to suit the tastes of nearly everyone.

Let’s face it….while there are many attractions on offer, one of the biggest is the food, and nobody does food quite like the Minnesota State Fair. After all, when you announce that you’re heading out to the Fair, what’s the first thing that your friends often ask? That’s right—“what are you planning on eating this year?”  The obvious answer, of course, would be “EVERYTHING!”

In addition to the tried-and-true classics such as Sweet Martha’s, mini-donuts, cheese curds, and fresh French fries, the Fair is offering a number of new foods to tantalize your taste buds this year, from vegan nosh to unique soul food to both sweet and savory delights.

Here are just a few of the newest delectable culinary tidbits awaiting you this year.

• Poultrygeist and Steak-xorcist (The Herbivorous Butcher):  This unique new
vendor, previously featured on Lavender’s Dine & Drink issue, is going to be offering two vegan entrees—Poultrygeist, which is their version of fried chicken topped with sausage gravy and French fried onion on Texas toast, and Steak-xorcist, a chicken fried steak topped with sausage gravy and French fried onions on Texas toast. Can’t decide which one you want? Combine both of them in the Monster Mash!

• Breakfast Gnocchi (The Blue Barn): Planning to hit the Fair early in the morning? Start off your day with this delightful bed of potato gnocchi topped with scrambled eggs, bacon, pesto cream, shallots and balsamic glaze.

• Celebration Cake On-A-Stick (Mancini’s al Fresco): This mini version of Mancini’s almond-infused house white cake that can be personalized on-site with text to celebrate a special occasion or favorite fair fan. And, of course…it’s on a stick!

After filling your belly with more sinfully delicious food than could ever be good for anyone, sitting down to digest might sound like a plan, and what could be better than taking in a concert while you do it? The Grandstand Concert Series has lined up a set of musical artists that should appeal to anyone’s taste.

Alice In Chains and Breaking Benjamin with special guests Bush open the Fair on August 25thwith the GRAMMY® nominated band that formed in Seattle in 1987 bringing their amazing blend of alternative rock, grunge, and indie sound to the Grandstand. Breaking Benjamin has had ten songs that reached number one on the charts, and Bush, with lead vocalist and guitarist Gavin Rossdale, is a name that is familiar to many with their string of 23 consecutive Top 40 hit singles.

The Current’s Music-On-A-Stick featuring Portugal. The Man and Manchester Orchestra with special guest Minneapolis-based indie rock trio Bad Bad Hats bursts upon the stage on Saturday, August 28th. This eclectic lineup promises an evening of eclectic and unique sounds that will delight even the most discerning ears and tastes.

The first week of the Great Minnesota Get Together rounds out with performances by Pit Bull on his Can’t Stop Us Now Summer Tour 2022 and very special guest Iggy Azalea.

Never fear, though—the entertainment just keeps on comin’ throughout the run of the Fair with diverse musical acts that should appeal to every musical taste and demographic with entertainers such as The Beach Boys, The Temptations, Florida Georgia Line, REO Speedwagon & Styx, the Zac Brown Band, and the inimitable and iconic Diana Ross among others.

Are the Midway rides more your thing? In addition to the old favorites, there are two new rides making their appearance this year that are guaranteed to get the scream-fest and adrenaline going in earnest.

The Iron Dragon Coaster will thrill and delight riders with a manic combination of hairpin turns, sudden drops, and lots of airtime. Make sure you ride this one before filling up on Pronto Pups and cheese curds! Music Express promises a top-speed ride—both forward and backward—through an array of dazzling lights and great music.

Whether you attend to see the variety of well-bred animals being shown by their proud handlers, nosh on the tantalizing array of foods, scream at the top of your lungs on the midway rides or try to win a giant stuffed animal for your sweetie at the carnival games, the Great Minnesota Get Together has something for everyone, so come on out and join in the fun.  It’s truly an experience that you don’t want to miss.

See you at the Fair!