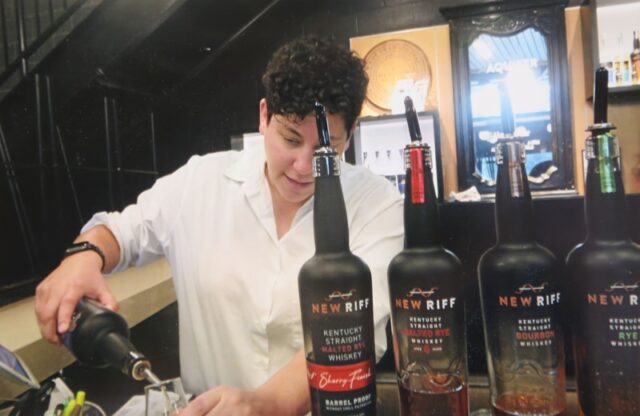 What’s in your glass, you spirits sippers and cocktail connoisseurs? If you’re on-trend today (and pampering your palate), it’s Bourbon. And where was Bourbon born? Northern Kentucky.

Its new “Come Find Bourbon” campaign is your open invitation to savor it in three towns that best showcase the spirit: Covington, spotlighting what’s new and trendy; Frankfort, home of Buffalo Trace, the oldest continuously operating distillery in the USA; and Bardstown, Bourbon’s birthplace.

Leaving the classy new Hotel Covington, I spot decorated Bourbon barrels lining the city’s streets, like plaster cows do in Chicago. My destination: New Riff Distilling, launched in 2014 with a mission to be “one of the greatest of small distilleries, with independent ownership.”

Did the world need yet-another Bourbon distillery? Sure! “There are many in Kentucky, but not in Northern Kentucky, and we’re just across the river from Cincinnati, Ohio, ‘the biggest town in Kentucky’” laughs Hannah Lowen, Vice President of Operations of New Riff Distilling, who lives nearby with her wife and daughter. “It’s called New Riff after a guitar riff—focused on innovation. Fresh eyes.”  We sip and savor its warm, open whiskey; a big, spicy malted rye: and its best-selling single-barrel Bourbon.

Lunchtime lures us to the German-born Mainstrasse neighborhood, where Otto’s menu spotlights a fried green tomato BLT and a riff on the traditional Hot Brown turkey sandwich. Then it’s off to Second Sight Spirits. Co-owner Carus Waggoner began fooling around with fermenting in his Las Vegas apartment, experimenting on his pals in Cirque du Soleil. Moving back to Kentucky, he and a partner opened the works in 2015 as a contrast to the “worship of dead old men” typical on Bourbon labels.

Carus tells his story from a tiny stage—complete with velvet curtains and footlights, rigged Rube Goldberg- style with parts salvaged from Home Depot. He got his start by building a still from junk he found on Craigslist. I’m prepared to spit my sips into a potted plant, but surprise: his rums and moonshine, as well as Oak Eye Bourbon, deserve applause. (Here’s hoping it’s poured at Covington’s LGBTQ bars: Lil’s, Rosie’s and Bar 32.)

After dinner at Purple Poulet, feasting on (natch) Southern fried chicken, I scoot over for a nightcap at Prohibition Bourbon Bar (reservations required), offering the largest collection (6,437) of Bourbons in, ahem, the entire world. It’s owned by Kim and Peter Newberry, Bourbon raconteurs par excellence and ultra-friendly to boot: “If you’re here, you’re part of our family.”

Heading south to Frankfort and its primo distillery, Buffalo Trace, we mirror the Wise Men following the Biblical star. BT is the most-awarded distillery in the world, doing what they’re best at for over 200 years. Tours and tastings are by appointment; nonetheless, expect a line that’s longer than an airport queue. Its Bourbon brands range from Eagle Run to the iconic Pappy van Winkle—and BT makes vodka, too—“just because we can.”

“Use the 1995 Buffalo Trace small batch as a mixer or everyday pour,” instructs tour guide Scott. “Proceed to the 10-year-old Eagle Rock with its long, sweet finish. Then try the Sazarac Rye over ice. The shelf life of Buffalo Trace is 20 years, but once open, six months. Use it also in frosting banana bread, or,” he chuckles, “over cereal.”

Lunch at Woodward Brewery, aside the Kentucky River, proves that Kentuckians know a thing or two about fine brews, too. Then jump aboard the  nearby Bourbon Boat to cruise the river (April 15-November 15), spotting herons, eagles, duck and catfish while Captain Randy narrates about “the river that made Bourbon” before the days of trucks and trains.

Frankfort, up next, boasts the gorgeous Old State Capitol as the anchor of its historic district, where, as signs instruct—while George Washington never slept here—the Marquis de Lafayette did. Visit the gravestone of Daniel Boone, the cache of indie shops along Broadway, and B’s Bakery for breakfast. Owner Beth Carter has catered for the Le Mans Race in France, the Taylor Swift tour, the Food Network, Buffalo Trace and the governor. Plus moi.

Bardstown, to the southwest, has been named “most beautiful small town in America” by Rand McNally and USA Today. Not incidentally, it boasts 11 distilleries within 16 miles. Our pick this morning is Bardstown Bourbon Company, the new kid (2014) on the block. Its architecturally stunning, Napa-like  campus is ground zero for its custom-distillation thrust—a niche that allows companies (or individuals) to create their own Bourbon profiles. It has produced 130,000 barrels for 30 companies, making it the fastest-growing brand ever, they say. Enjoy a Raspberry Bourbon slushie while awaiting the start of your chosen tour (no walk-ins; reservations run 3-6 months out), then proceed to a rickhouse (storehouse) to sneak sips from barrels that will be released next year.

After lunch in its stylish café (steak frites for my companion, grilled Caesar for me), we hit the road to investigate Log Still, which started production in 2018 under the eye of owner Wally Dant on its 350 acres, which also boasts a concert amphitheater and classy bar and restaurant, where Chef David sent out bites including a mini Hot Brown; devilled egg topped with pickled shrimp; and pimento cheese tart. Meanwhile bartender Tara plied us with her own inventions: Sassafras Punch (sassafras tea, lemon, maple syrup, Bourbon) and Watermelon Splash (gin, watermelon, pineapple).

Bardstown, my final stop, sits at the center of Civil War history. One museum details a significant battle here, while another showcases women in the Civil War (spies, soldiers in disguise, and Army nurses). Visit, too, My Old Kentucky Home, the gracious plantation manse which Stephen Foster commemorated in his beloved ballad.

On to Heaven Hill and its Connoisseur Whiskey Tour, one of several offered here, preceded by a film explaining barrel-making. HH, the second-largest distillery in the world, has been owned by the same family since its launch in 1935. Today we tasted five of its brands, ranging from Elijah Craig to a 7-year Heaven Hill to the special 10-year Heritage.

Before I head home via a non-stop Sun Country flight, time for one final tour—Luxe Row, founded in 2018, and one of the most modern distilleries in both style and operation. For more information, visit www.comefindbourbon.com and start sipping.