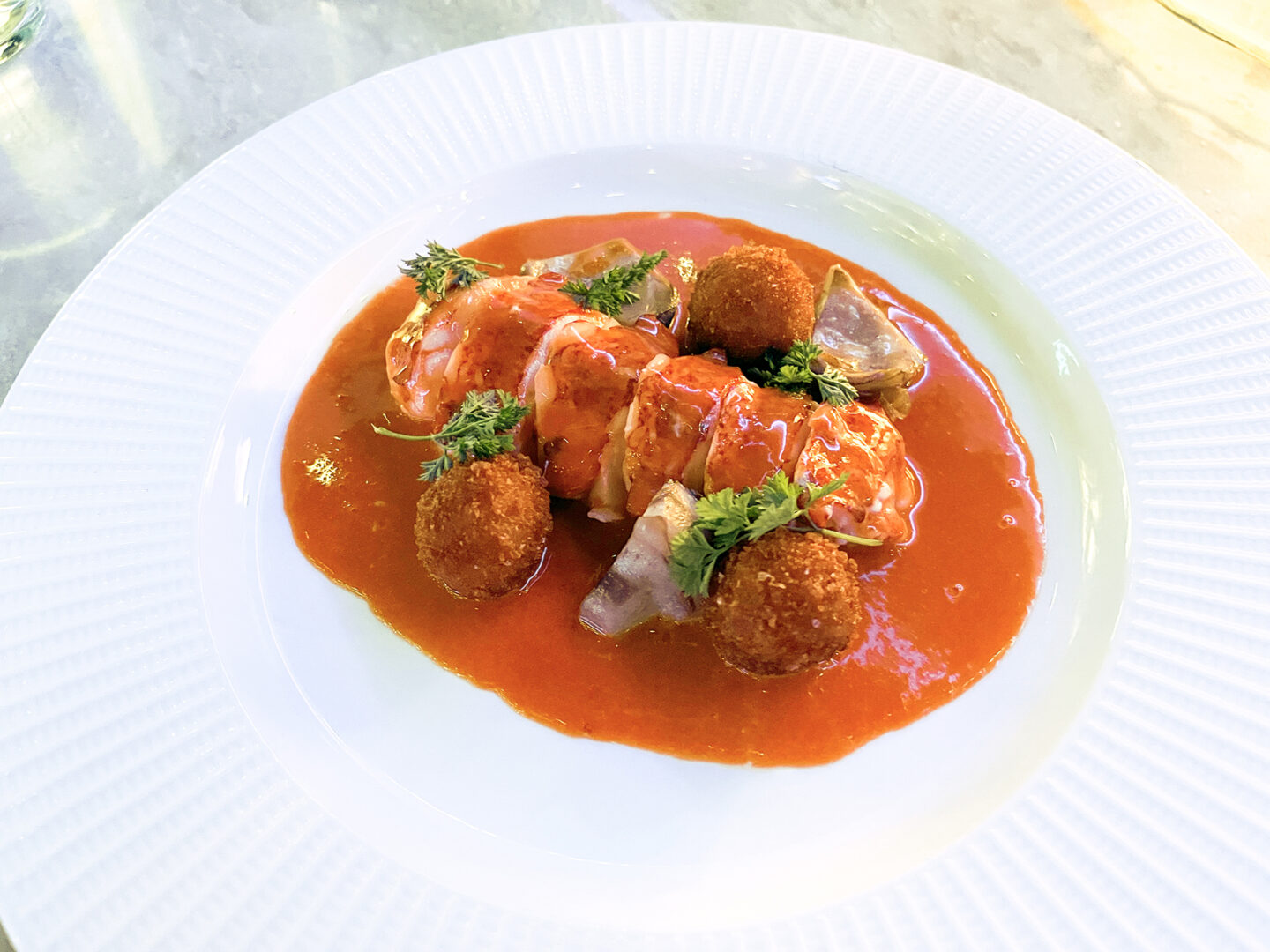 Yes, I’ve fallen head over heels for the new restaurant, anchoring the fifth floor of the Rand Hotel in downtown Minneapolis. At (way-too) long last, the city once again hosts a kitchen devoted to French bistro classics, and it comes our way from that restaurateur who never sleeps, Daniel del Prado (Martina, Colita, Josefina, Cardamom, Sanjusan, etc.).

The dreamy setting, under a transparent domed ceiling, is couched in cozy shadows, backlit in soft lavender. Tables, banquettes and bar stools aside the open kitchen welcome lovers of bistro classics, which del Prado has edited for today’s palates—a list of 21 delectable edibles ranging from small-plate snacks (oysters, shrimp or tuna crudo, etc.) to mini-entrees like lobster, scallops and a full-on cote de boeuf for two, $95. (Not to worry: Many of the shareable plates ring in under $20.)

We began our meander through the menu with the Lyonnaise salad—the French bistro classic, here interpreted with frisee as the greens of choice, rinsed with a perky but not intrusive sherry vinaigrette. The usual lardon batons were miniaturized into a sweet/salty small dice of bacon, while the egg that crowns this creation here has achieved the jammy-yolk stage rather than acting as a spurt of golden goodness to dress the plate when punctured by a fork. (Moi, I love the chance to blend the rich, flowing egg yolk into the greens, but Blondette’s more sober take come off just fine, too.)

Next, we summoned an item seldom seen, these days, on a Minnesota menu—sweetbreads. Those appendages of veal—chewy bits, sort of like cooked shrimp in texture—mingle with earthy mushrooms moistened by madeira jus upon a bed of pommes puree (OK, plain ol’ mashed potatoes, and delicious ones): rich, rich, rich. Off to a good start!

Escargot next (I remind you, it’s back to the classics here)—chewy, deeply-flavored morsels accompanied by whole cloves of garlic and paired with, of all things, bone marrow—and not the usual slender rib to delve, but apparently the rib of a brontosaurus. A deeply rich Bordelaise sauce enrobes and tempers what otherwise might be an embarrassment of riches, further leavened by an herb salad and served with hearty toasts upon which to slather the ivory marrow’s largesse.

That’s three rich courses so far, so why not make it four? Especially when we spied lobster ($29) on the list. The sweet, perfectly timed tail flesh could come out on a saltine cracker and I’d be happy. But, making us happier still, it’s served bathed lightly in Sauce Americaine (onions, tomatoes, white wine, butter, fish stock and whatnot), presented with bits of artichoke and mildly simmering fresno chilies.

Because the restaurant had been open only a few days, desserts at this point came from another of del Prado’s kitchens—in this case, a tasty fig tart. With so many edible reasons to return— from the jalapeno-sparked charred leeks recommended by our excellent server to duck a l’orange; from a country terrine to a chicken roulade with choucroute bread pudding—I’m considering taking a permanent room in the hotel.

(But wait! Lovable restaurateur Vincent Francoual is returning to the French dining scene with his new bistro, Chloe, in an Eastside hotel. Are we doubly blessed, or what?)