A Word In Edgewise: “Sweat”: And It Has Ever Been 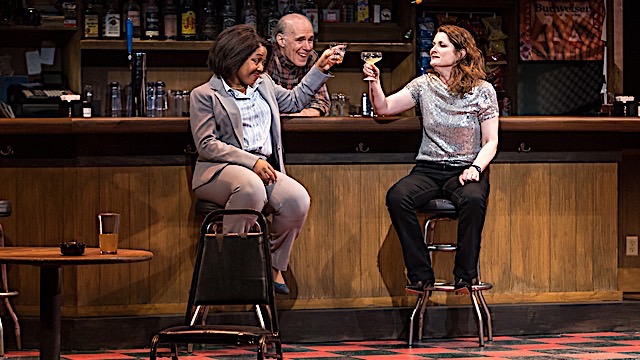 The end may come in the blink of an eye–tsunami, drunk driver, infarct. Sometimes, equally devastating, it creeps up on little cat feet.

Lynn Nottage’s Sweat, concerns one of the latter, a surgical biopsy of the fate of Reading, Pennsylvania, and its union mill and factory workers. Their Reading railroad (of Monopoly fame) once moved vast quantities of textiles steel products, auto parts to become Pennsylvania’s fourth largest city. Then, incrementally, industrial evolution brought globalization while NAFTA created social and economic fissures. Reading dropped from 32nd in residents living in poverty to #1. A Google click today: over 41 percent.

Nottage’s two years of research, interviewing a range of Reading citizens, provided the background and dialogue for Sweat, sharpened by her own lyrical arrangement. The dialogue, even at its fiercest, fairly sings.

Action takes place primarily in a local bar, run, not owned, by Stan, an older, former worker sidelined by a crippling on-the-job injury. He’s seen it all, strives to add balance. His customers include besties Tracey (white) and Cynthia (black) and the women that gather with them to drink, kvetch, celebrate birthdays. Their sons, Jason and Chris, are pals, who, after an incident we see played out later, have been in prison since 2000. Oscar, Hispanic, is an ignored bar back, removing empties, restocking the full, wiping tables, endlessly sweeping.

As the action shifts between 2000 to 2008, moving banners overhead flash the news of the times. Curtain rises in 2008 as a parole officer talks separately with Jason and Chris, as they’re released. They first meet again back in Reading.

Back in 2000, Cynthia and Tracey seek promotion. Cynthia is chosen as the shop floor supervisor. She sees it as an affirmation of her worth, while Tracey and others see it as betrayal. The union is slipping, companies are cutting wages and benefits. Cynthia stresses she wants to help fellow workers, urging them to accept the new conditions; Stan warns, “You could wake up tomorrow and all your jobs would be in Mexico.” Their words fall on deaf ears. Wokers refuse the terms, go on strike, are locked out.

In 2008, the young men return and meet again, but Reading has become a foreign town; economic, social tectonic plates have shifted. New technologies, demographics, foreign markets and NAFTA have arrived. Now jobless, adrift, local people fall prey to drugs and alcohol, angry and afraid they turn on one another. Gone is their pride in being one in a long line of family workers, poor perhaps but with a certain future. Now Tracey cries, “Do you know what it’s like to get up and have no place to go?”

Jason and Chris find their bar now managed by Oscar, decked out in new, trendy trappings and were shown, at last, the results of the tragic event that occasioned their prison sentences; a moving scene that yet offers some possibility of resolution for Cynthia, Tracey, and the others.

Sweat is mightily relevant today. As has happened for millennia, those with power use those who have none to divide and conquer. Factory owners, too, face losses and the changes of the new order, but their greater resources allow many to flee to sunnier climes, and cheaper, non-union labor.

A brilliant, spot-on cast, a Pulitzer Prize-winning play–don’t miss Sweat. Now at the Guthrie through August 21.