A Word In Edgewise: Dreams Deferred Diminish Us All 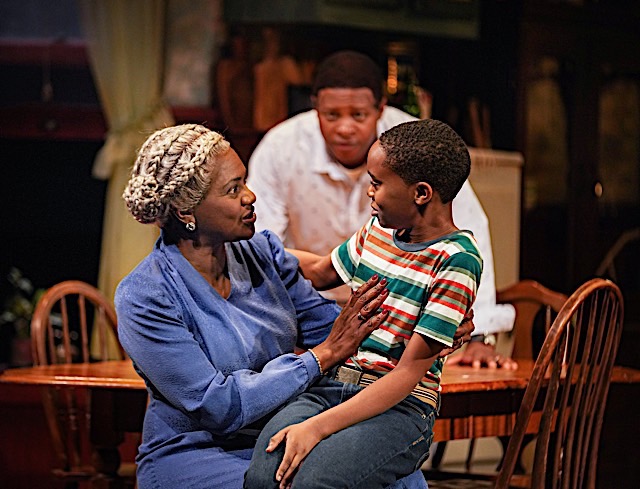 Haves and Have-nots have been with us since we began to walk upright; the Haves jealously protecting their advantage down the millennia. Thus Karl Lindner–the only white in Guthrie’s A Raisin in the Sun–speaks for Clybourne Park’s Improvement Association, “A sort of welcoming committee,” to the Youngers, a South Side Chicago family that is preparing to move in. They are Black.

“You’ve got to admit that a man, right or wrong, has the right to want to have the neighborhood he lives in a certain kind of way,” Lindner pursues, “where neighbors share a common background.” He’s come to buy them out.

“People can get awful worked up,” Lindner warns, “ when they feel that their whole way of life and everything they’ve worked for is threatened.”

Each one has dreams, though not the same ones; Lena yearns for a real home, Beneatha to be a doctor, Walter Lee to buy a liquor store with two buddies. Ruth wants out. It’s September 1953, when few dreams in the redlined South Side are realized.

But, there’s hope: The recent death of Lena’s husband, Big Walter, means a $10,000 insurance check for Lena; it’s due in this morning’s mail. Travis fetches the envelope and Lena removes the paper upon which their dreams ride.

When Lena, religiously anti-liquor, refuses to subsidize Walter’s scheme, he storms out. Lena also departs, returning later to announce to all she has bought the family a house. Softened by her son’s misery, she admits it was only a down-payment, entrusting Walter Lee with $6,500 instructing him deposit $3,000 for Beneatha’s medical studies, and handle the remainder himself.

Karl Linder first appears as the family is packing, makes his offer and is dismissed. Shortly after, Bobo, a second liquor store partner triumvirate, arrives to stammer his confession that all the money has disappeared with thieving partner three. The liquor store mirage, into which Walter Lee had sunk the entire $6,500, vanishes.

Walter Lee, breaks down, dropping to his knees, crying “That money is my father’s flesh!” He calls Lindner back to accept the offer. The movers arrive.

How the rest plays out, I urge you to experience for yourselves. Lorraine Hansberry’s script is brought to life by this superb cast, whose timing and delivery are spot-on, infusing each scene with the playwright’s intended longing, loneliness, darkness, pain, and humor. The viewer is there, not a voyeur peeping through the window.

We’re participants in fact. There’s been progress, but the reality, after nearly seven decades, we’ve achieved no lasting solutions. Redlining, bigotry, misogyny, racial and religious violence still fill the media, while 21st century Haves are busy mining vaster, deeper chasms to exclude Have-Nots than the Younger family could have imagined.

“The play’s the thing/wherein I’ll catch the conscience of the King,” gloated Hamlet. Realistically, Having swells in inverse proportion to dying Conscience.

*** A Raisin in the Sun will play at the Guthrie through June 5.