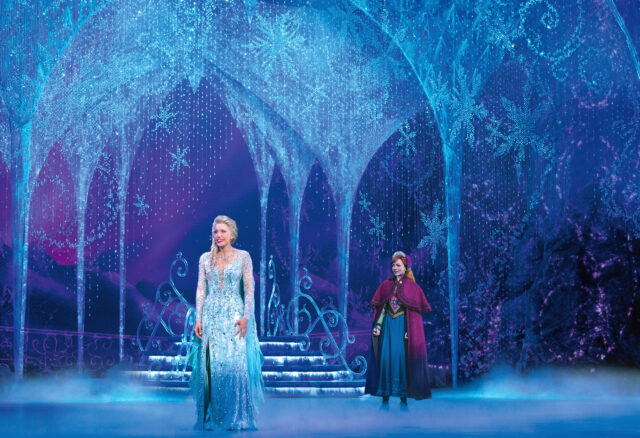 The Disney film immediately had people saying it was destined to be adapted into a Broadway show, and it quickly turned into a can’t-miss theatrical event. Now, Broadway’s Frozen kicks off its first North American tour at the Orpheum Theatre in Minneapolis to launch the 2021-2022 Bank of America Broadway on Hennepin season. The Tony-nominated Best Musical completed its Broadway run in March 2020 after breaking four house records at The St. James Theatre.

Audiences will immediately recognize the magical story of two sisters town apart by a mysterious secret. As Elsa struggles with being an outsider and self-acceptance (a theme that resonated heavily with LGBTQ audiences when the film debuted), Anna sets out on a thrilling adventure to bring her family together once again.

Kyle Lamar Mitchell joins the touring cast as Anna and Elsa’s father, King Agnarr, after previously showcasing his talents in another Disney theatrical production to grace the Great White Way: The Lion King.

What’s it like to be back on the stage, in the theater, after so many months away due to COVID?

I have to say it feels glorious. Sitting at home or staying in one place—it’s nice to take a break every now and then, but not for that long. As a creative person, and as a people person, my energy comes from interacting with others. I chose to become an entertainer because I love bringing joy to as many people as possible; that sort of fills me up by making them smile. So, to be able to do that once again, it really feels like I’m alive again. It feel so wonderful to shine on and on.

Frozen has such universal and powerful themes, like family, sacrifice, learning to accept and celebrate yourself; learning that you can be your own hero; trusting that hope and joy can triumph over fear. How has leaning into these themes helped you over the past year?

You are correct, there are so many very salient themes, but the one that comes to the forefront for me is this theme of light and love, and how love will conquer all

We’ve all been going through—and may still be going through—some things with the pandemic and the world as it is. To get to come back to family, and the people that I call family here in the cast, it’s allowed me to lean into that love of each other and love of self. To go back to a space where I’m welcomed, where I’m celebrated for the fullness of my personhood, and to do what I love doing and what I do very well. I sort of forgot that.

That has been such a pleasure and such a joy to get back into. So I definitely say that theme of love and light and being able to share that with others, it makes me excited to wake up every day and to go too work.

You’ve done The Lion King and now Frozen. What is it about a Disney production that draws you in?

You know, I was so bless to be a part of The Lion King for six years, and when the opportunity to stay within—as we call it—“the House of Mouse,” another Disney family production, I was excited because Disney really takes care of their artists and their employees. So, I was excited to sort of stay within that family grouping.

The Lion King, for me, was a very special moment because it was the first show I ever saw as a kid. My mom took myself and my brother, when I was about 10 years old, to go see my first Broadway show, The Lion King. And there’s this moment in the second act, just like in the movie, when Mufasa’s face appears to Simba in the night sky. Having done the production, I know how it’s executed; I know the ins and outs of it and the stage craft.

But as a child, and having never seen live theater before, I saw that and in that moment I was so affected that I turned to my mother and said, “Mommy, when I grow up, I’m going to be on Broadway in The Lion King and I’m going to play Simba.” And she said, “Okay, let’s make that happen,” and then years later with her support, we were able to make that happen.

Because that was such a special experience for me, I was like, I wonder if the next role that I have or next show that I’m a part of is going to affect me in such a way. And that sort of was the litmus: I want to be moved by a story and by a production in a similar way. And then I got to join Frozen. Being a part of the first national tour, we had this really wonderful opportunity to start from zero and build from the ground up.

We’ve got this awesome team of writers and directors and choreographers under the helm of Michael Grandage, who is this amazing Tony Award-winning director and a very sweet guy. And we’ve got Rob Ashford doing stunning choreography and Kristen and Bobby Lopez who brought all their wonderful music from the movie and then added about a dozen more original songs to the show.

At each step of the process we, as artists, were invited to add ourselves to the story, and to really make this a very human experience. I think by doing that, not only am I gratified as an artist, but I think also the stakes are raised for everyone across the board within the production as well as the audience members. I think we attract a lot more audience members (and welcome them) to enjoy the story. It’s not just for little kids; it’s really an experience for the whole family and for the whole world, so I’m excited to share that with the rest of the country.

With the launch of the tour, the creative team chose to focus even more on the relationship between Elsa and Anna. What other changes have been made? What can audiences look forward to?

There have been a few changes. I’d say the coolest one, or the one that I enjoy the most that I get to watch every night… there is a duet between Anna and Elsa that Bobby and Kristen Lopez added that’s called “I Can’t Lose You.” And it is such a stunning—don’t even get me started on the Carolines (Caroline Innerbichler [Anna] and Caroline Bowman [Elsa]). They are stellar, stellar talents and wonderful human beings.

So, the performances are out of this world, but also just the content of the story, of the song itself, and the fact that these two sisters are finally getting to have this exchange that was hinted at that we never got to see the first time around… I think it’s really wonderful to see these two incredibly powerful actors and these women have this very honest and open conversation with each other to be like, I love you, but also saying I love you enough to let you go. And Anna is saying I love you too much to let you go. Just to see the performances that Caroline Innerbichler and Caroline Bowman bring to the stage is really stunning. That would definitely be my favorite addition to the show.

What do you make of all the fan theories around King Agnarr and the connections between Frozen and Tarzan?

Oh, my gosh. Wait. [Laughs] That’s so funny that you mention this, because I did read some kind of fan theory. I saw that, and I kind of think that’s amazing. Honestly, before the second Frozen film came out, I was hoping that the king and queen were still alive—slightly for selfish reasons. I was like, how wonderful would it be for them to be reunited in the second film? That would also be very Disney, because we do love a happy ending. So when I came across that fan theory, I thought that was really cool, and I’m a big fan of that, I would love that. I’m not sure though, didn’t Tarzan’s parents die on land, like in the jungle? So maybe some things were lost in translation, but I think that would be very cool. [Laughs] I would love for Anna and Elsa to have an awesome brother somewhere in Africa, who’s swinging through the trees and talking to animals. And, also, that could be his form of magic, in a sense. So I’m all for it, I’m all for it!