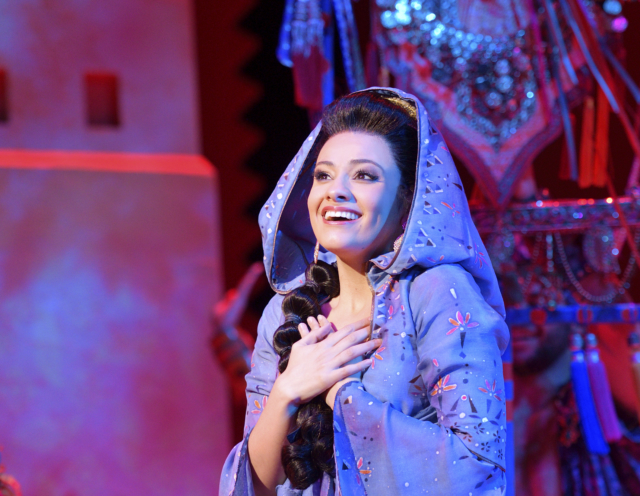 Get ready to hop on a magic carpet ride! Disney magic is hitting the Orpheum stage once again as Aladdin kicks off the theatre’s 2017-18 season. Adapted from the 1992 Academy Award-winning animated film, Aladdin features a full score, including the five cherished songs from the film’s award-winning soundtrack and more written especially for the stage. Minneapolis finally hosts the tale of how a street rat wins the heart of a princess.

Isabelle McCalla takes on the role of the feisty Princess Jasmine opposite Adam Jacobs as Aladdin (who originated the role on Broadway). Despite holding the title of “princess,” Jasmine has a thirst for adventure beyond the palace walls, running away to escape the confines of the monarchy to pursue the freedom of choice. 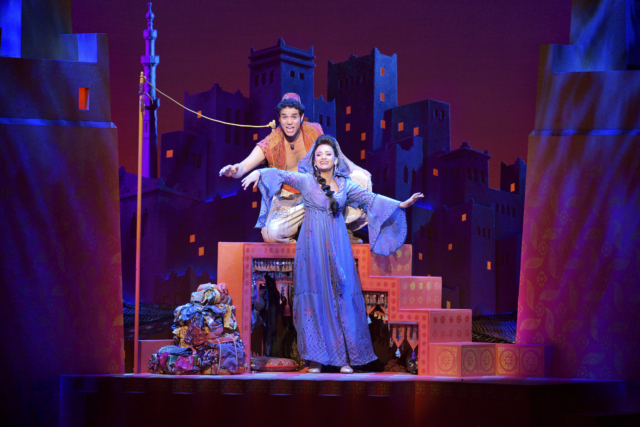 You’ve said before that Jasmine was the princess you gravitated toward most growing up. What’s it been like stepping into this role and the large-scale world of Disney? Was the magic carpet ride everything you hoped for?
Isabelle McCalla: This whole experience has been wonderfully surreal to say the least. Disney was a huge part of my childhood. I used to watch all of the animated features and pretend to be the princesses in the films. Aladdin was the VHS that I wore out the most, because Jasmine was the princess I most identified with, even at a young age. I used to march around the house exclaiming “I am NOT a prize to be won!” to anyone who’d listen. So now I get to say that line in the appropriate setting, play a strong, independent and adventurous young woman, AND ride a magic carpet eight times a week?! My childhood (and adult) self is squealing! And yes, the magic carpet ride is every bit as fantastic as I could have dreamed. Singing “A Whole New World” while flying never gets old.

When people think of Disney, they tend to think magical, over-the-top, and everything that goes along with that. But your portrayal is being talked about for being more down to earth and realistic. How do you approach the role without going into the caricature that a lot of people associate with Disney princesses?
IM: From the very beginning, Casey Nicholaw, our director, made it very clear to us that while Aladdin takes place in a heightened and magical world, the acting has to be grounded in truth. As such, I was very determined to make Jasmine a full-blooded complex human, with varying thoughts and feelings. My primary goal was to find out what she wants, what’s standing in her way, and how to get it. After reading Chad Beguelin’s script for the stage adaptation, it became clear to me that Jasmine’s ultimate desire is to have the freedom of choice. It just so happens that her responsibilities as a princess impede her freedom, and therefore her happiness. Her whole character revolves around questioning the laws and ideals surrounding the monarchy. She is so much more than just her title, and that is what she tries desperately to get people to understand. Now of course being a princess informs her behavior, but I never wanted to diminish her spunk or intelligence in order to “act like a princess.” Her physical character and the way she relates to space is influenced by her royal upbringing, but not her mind or her heart. And in the end, the audience has to believe that she is capable of ruling a kingdom. Personally, I identify with her desires and her way of thinking, so it’s easy to give over to Jasmine. I just start every night thinking of freedom, adventure, and love, and then I trust in the script, the direction, and the company to help me tell her story honestly.

Along with that realism in your character portrayal, Aladdin addresses a lot of issues that not many other Disney shows do: feminism, socioeconomic status, etc. Are these things you talked about during rehearsal? How is Aladdin so effective at weaving in these themes?
IM: We definitely explored these themes during rehearsals. Agrabah is a kingdom where the socioeconomic hierarchy is very rigid. On one hand, you have Aladdin who is a victim of systemic class issues, and on the other hand you have Jasmine who is a victim of the patriarchy. People expect Jasmine to be the dutiful silent wife, and people expect Aladdin to be a worthless street rat. Both know that they have more to offer than their label from society and they work to challenge those perceptions. Specifically, Jasmine is a woman ahead of her time (and her wardrobe reflects that, as the only female character to wear pants). While she has financial stability, she lives in a patriarchal kingdom where princesses are traditionally ornamental, and used as pawns for marriage and breeding. As such, she doesn’t have the freedom of choice that she desires, whether it be to rule a kingdom as a woman, or to marry for love. So, she runs away. She would rather brave a penniless existence as long as she has control over her destiny. When Jasmine and Aladdin talk on his rooftop, it is a meeting of the minds, despite class and gender. He says “you should be free to make your own choices, right?” and she says “Why should some people get to live in such splendor, when others…well…don’t.” They are two people who recognize the other person’s plight. It is the first time in the show that these two are validated as equals; Jasmine is validated by a man, and Aladdin is validated by nobility. Their love grows out of equality and hope for change.

This is a story that reinforces the old adage, “don’t judge a book by its cover.” Your worth is not determined by how much money you have, or by what sex you are. Those are the cards you’re dealt, but you can decide how to play them, and Jasmine and Aladdin know how to change the game and bring about “a new fantastic point of view.” 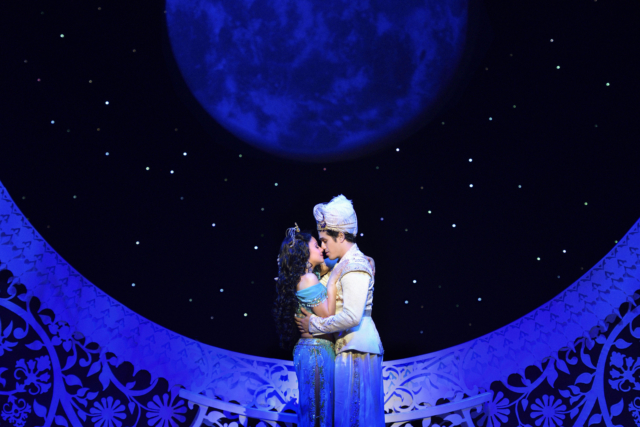 What is it like to have the platform to not only play a role in such a recognizable Disney classic, but to play a woman of color who exudes so much strength and independence?
IM: At times, it can be daunting to think of this platform that I have been given in the Disney Theatrical universe. I get nervous thinking about saying or doing the wrong thing, or having people dislike me, which I think is natural. But then I remind myself of who I get to play and how well-rounded she is! She’s smart, fun, independent, and always follows her heart. PLUS she’s a woman of color, who luckily doesn’t have to deal with the trappings of racism and is able to speak against injustices without being silenced. I’m thrilled that I get to play a woman of color with power, as opposed to a woman of color who is a criminal. It is so important to see positive role models reflected on the screen and stage that look like you, and growing up I didn’t have a lot of that. So Jasmine is a dream. If I am able to inspire a few young women of color to find the strength and independence within themselves to either challenge the political system or follow their hearts to be their free authentic selves, than that will mean so much to me.

A lot of actors, from Broadway to film, have been speaking out lately about the lack of diversity and whitewashing roles traditionally played by people of color. And the live-action Aladdin film has actually been praised for its casting. What are your thoughts on the state of things in Hollywood and Broadway?
IM: Honestly, I’m glad that the conversation is happening, and that people are becoming more aware of the need for appropriate representation. This is no longer a homogenous country, and our art should reflect that. There is still a ways to go, but I believe we’re making headway, as long as we keep speaking up. That’s why I’m grateful to work for a company like Disney that is dedicated to bringing together a diverse ensemble of actors, both onstage and on screen. Aladdin is set in the fictional kingdom of Agrabah, and as such our touring company is comprised of thirty plus men and women who all come from very diverse backgrounds. I count myself lucky that I get to perform with this incredibly talented cast to tell a story that looks beyond the social construct of race and instead focuses on the powers of equality, freedom, and love.

Aladdin runs at the Orpheum Theatre September 15–October 8. For more information and to purchase tickets, head to www.hennepintheatretrust.org.