Columbia, the Gem of Missouri 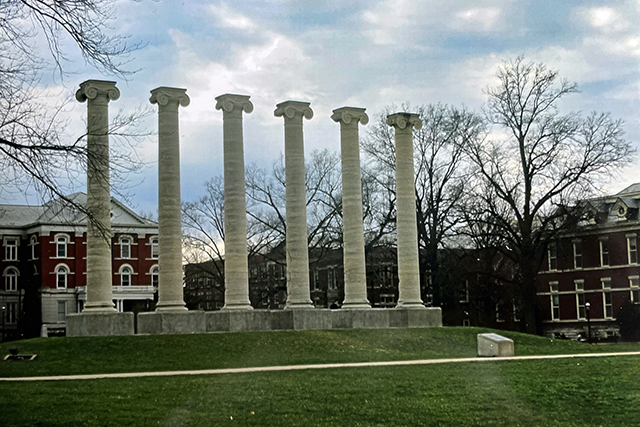 The iconic Columns on Mizzou's campus. Photos by Carla Waldemar

Columbia knows how to party! This happening Central Missouri city spins from one can’t-miss festival to another, showcasing the cutting edge in film, music, art, literature and  more, each led by bold-name presenters (I’ve sidled up to jazz legend Mavis Staples and Britain’s fiction goddess Allie Smith, to name-drop a few).

But stick around after the party to bask in the vibes of a hip college town. Three pillars of academe reign here, symbolized by the iconic Grecian pillars anchoring the U of Missouri—or, as friends call it, Mizzou. The town hums with creative types, whose galleries populate the North Village arts community, and the forward entrepreneurs driving The District adjoining it—a hotbed of trendy shops and clubs. Add in the culinary cognoscenti cooking up Columbia’s diverse dining lures, where they had me at ‘biscuits.’ (More on that later.) Plus, all is within easy strolling distance, as town interweaves with gown.

I bedded down in the hip Broadway Hotel, where the fella clerking the desk sports a flouncy skirt which I envy. Did he find it at Maude’s Vintage, I wonder, where a garnet velvet smoking jacket vies for best of show with an ivory wool tuxedo?

Speaking of swank: Nearby Stephens College’s intriguing  Costume Collection traces the history of garments from 1650 to tomorrow. So does the Made in Missouri wing of the Historical Society, where a Depression-era flour sack dress shares space with the shiny gold sheath sported by the young man his high school chose as Prom Queen.

The Historical Society Is also the place to absorb the collection of WWII editorial cartoons from the St. Louis Post Dispatch, along with the works of noted painter George Caleb Bingham, who moved here in 1834 to set up a portrait studio.

Had to the Ninth Street Art District heralds to encounter the bold names of tomorrow. There at Orr Street Studios, watch painters at work in their ateliers, then catch the photo exhibit spotlighting award- winning shots of photojournalists, including Taliban warriors breaking for tea.

Swing down to The District to fire up your credit card. Makes Scents sells bath necessities from scented soaps to rubber duckies. Skylark and Yellow Dog—imagine! Two indie bookstores in the same block!—carry volumes new and used. Bluestem specializes in high-end, Missouri-made crafts, while Poppy’s offers elite paper goods and gifts. Tallulah’s showcases chic kitchenware, from pizza paddles to macaron tree ornaments. American Shoes lures the serious collector. (How about those glittery high-tops?) The Candy Factory solves all your gift problems, unless you yield to temptation and devour your purchases on the spot. Choose from fancy truffles to chocolate-covered Twinkies.

You’ve just walked off innumerable calories, so you’re now entitled to visit Sparky’s, home of really bad art on the walls and really good ice cream in the cooler—along with a menagerie of crocheted stuffed animals. (Don’t ask.)

But wait! Resist your craving for a second cone because it’s time for brunch! I vote for the Dive Bar, which (true to its name) sports no maître d’ nor flowers on the table. Instead, straight to the basics, like a potent Bloody Mary sided with a heap of shrimp and cheesy, garlic-scented grits, crowned with a sunny-side egg. Or graduate—ta da!—to the biscuit number, loaded with a two-egg omelet, tomatoes and sausage gravy.

More biscuits? You betcha! That’s why God smiled on a certain food truck and turned it into a brick-and-mortar shrine called Ozark Mountain Biscuit & Bar. We started with great-grandma Jetti’s biscuit, served—as any self-respecting grannie would—with plenty of melted butter and sorghum molasses. Continue to the biscuit topped with pulled pork (talk about a marriage made in dining heaven); the classic farmstead chicken dinner; or tender, slow-cooked pot roast. Across the road lies temptation of a liquid sort: Yield to Logboat Brewing Company’s medal-winning flights of beers.

Beer is also the beverage of choice at Booches Billiards, launched in 1864 as a gentlemen’s club. As we all know, gentlemen prefer….burgers. The griddle’s cheese-topped number, slid your way on a sheet of waxed paper, has been voted one of the Top Ten in the USA.

Its neighbor, Shakespeare’s, has been serving straight-arrow pizza almost that long (well, since 1973). It’s across the street from the Mizzou campus, whose students consider this parlor their clubhouse.

Ernie’s is my kind of clubhouse, however, and its history goes back even further. The diner has been dishing out breakfast and lunch divine since 1934, including to comic-book artist Chester (“Dick Tracy”) Gould, who signed the original drawing on the wall when visiting his college-bound daughter here. Murry’s is a comparative newcomer (think 1985), where supper-club fare with a side of jazz fills the bill. How long since you’ve seen frogs’ legs on a menu? Chicken livers? But its fame rests on its classic steak sandwich.

Nothing classic about Ragtag Cinema and adjoining Uprise Bakery. It’s the bar/eatery of choice for festival-goers (and lucky folks like me, in between) with its homemade soups and bread. Sycamore heads my list for special-occasion dining, where any day you’ve made it to dinnertime counts as a special occasion. Wolf down their pulled pork sliders. The cheese-rich gnocchi. The woodsy local mushrooms. Oh, stop me!  Then call it a night at the primo gay bar in town, Arch & Column.

The Little Town That Could

Thirty miles from Columbia sits a bucolic little town named Fulton, home to Westminster, a prestigious private college—sort of like Northfield in Minnesota, but with better food. And a monumental place in history.

Each year, the college invites an illustrious notable to deliver a lecture, and in 1947, this tiny institution in an unknown town decided to go big: They invited Winston Churchilll. Who had no clue. He turned to his friend, then-President Harry Truman of Missouri, who wrote back, “Come!”

Churchill not only showed up to ride in a motorcade puffing his famous cigar….he made history. He delivered what became his world-famous Iron Curtain speech. And you can read it, with his own notations, in Fulton’s National Churchill Museum. The museum—the only one of its kind—documents the statesman’s rollercoaster life.  Newsreels cover his time in Fulton aside singular artifacts, including a treasure trove of the Prime Minister’s watercolor paintings.

Learning that it pays to ask, cheeky little Fulton went on to request—and receive—a husky portion of the Berlin Wall, complete with robust graffiti. It now stands outside the memorial. And, London, can you spare one of your exquisite churches designed by that star-chitect of the 1600s, Christopher Wren?  Glad to. The blitz-damaged St. Mary of Alderbury, where poet John Milton was married, was reconstructed here, stone by stone, and now invites Fulton’s visitors to walk right in.

Linger in Fulton to promenade downtown’s Brick District, poking into stores like GoPo (popcorn in Fulton-only flavors including grasshopper pie and Greek pizza), arts and antiques emporia, and the cotton candy window. Dine (you must!) at Bek’s on sirloin with Bourbon mushrooms, horseradish cream, and bacon jam or jerk-seasoned barramundi aside coconut rice and pineapple-ginger chutney.

On the edge of town, in a world of its own, sits Auto World. This obsession-driven museum showcases a rotating 88 autos of the owner’s vintage-car collection, ranging from 1903 to 1987. Ogle a 1913 Model T Ford. The 1926 lemon-yellow Pierce Arrow “that brings out the macho in a person,” says guide Tom Jones. A Stanley Steamer from 1924 worth $150,000. The way-ahead of its time electric Renault of 1974. They’re all shiny enough to shave by.

A little more dusty but just as intriguing: Artichoke Annie’s Antiques on the highway, where you can discover a whiskey flask in the shape of Mozart; a Tiffany lamp aside a WWII uniform; and duck decoys and fishing lures infiltrating Jesus kitsch. Check on www.VisitFulton.com and start packing.