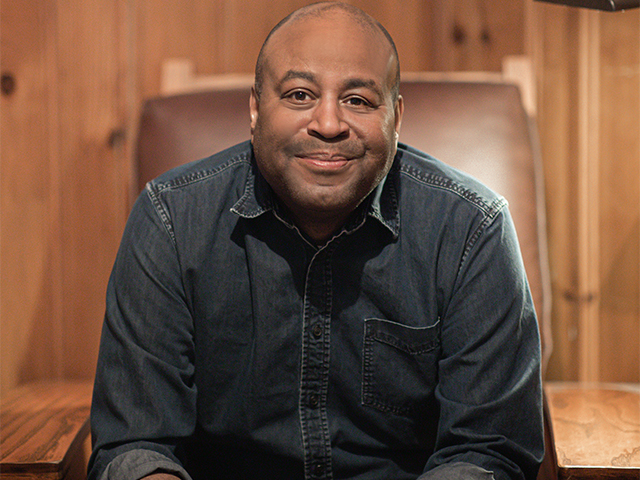 It’s very possible that you’ve invited him into your living room—him, or a reasonable facsimile of him, that is…tiny boxes of light within your television screen that form a friendly, inviting face augmented by an easy, ageless smile.  If you’ve let him in, then you probably think of him as your coolest uncle, the one with the best stories—in his case, stories about a high school principal who connects to his student via custom-made roller skate antics, or a parachute tailor who turns his skill to the mass production of COVID-filtering face masks, or a rustic arm wrestler who crushes the competition while armed with the wristless arms of a cartoon sailor.

“I don’t want to hide who I am,” he proclaims.  “I want to be visible.  I want to show people that gay people are people, too, and we can do all kinds of jobs and all kinds of things.”  So there you have it, folks:  Maury Glover is officially out and proud, and you heard it here first.

Okay, well, maybe not here first, since Maury Glover has been unapologetically Maury Glover since his career began.  “This was the early ‘90s, and one thing I decided early on was that I was going to be open and out and who I am,” Glover asserts.  “If people have a problem with that, then that’s on them, that’s not on me.”

It’s this sanguine but unbending pride that serves as the theme to Maury’s own story. Hearkening back to his salad days, Glover remembers television reporting as a job that he didn’t seek so much as be found by.  “I kind of fell into it,” the reporter reports.  A summer college job as a gofer for a local TV station turned into an internship which turned into an actual assignment, one focused on exposing redlining, a discriminatory practice that puts services—usually bank loans and insurance–out of reach for residents of certain areas based on race or ethnicity.  In this case, the area in question was Minneapolis’s Camden Neighborhood.

“There was a realtor who was directing white buyers away from that neighborhood and black buyers in,” Glover remembers.  “The community complained about it, but they didn’t have any way to prove it.”  Directed by the station’s investigative unit, Glover and an associate approached the realtor while posing as affluent African Americans even as two other associates posed as lower-educated, lower-income white buyers, both cloak-and-dagger spectacles recorded via hidden camera.

This successful adventure proved to be an awakening for Glover. Says he:  “Being part of that story was like, ‘Oh, interesting, how the power of media can help you uncover racism or discrimination.’  So once I did that, I was like, ‘Oh, that’s really cool.  I’ll give this a try and see how it goes.’  So they offered me a job after I graduated college.”

There was, alas, no small distance between his current station and young Maury Glover–a grinding tenure as overnight producer was followed by years and years of crime reporting…a grind which was somewhat tempered by occasional “lighter features.”  These garnered the attention of various producers around the Fox 9 studios.  “They would say, ‘Hey, when are you going to get your own segment?’” recalls Glover.  “I’d say, ‘Well, “Maury’s Stories” is coming up.’  We used to joke about it.”

The universe, apparently, didn’t find humor in those exchanges.  “A couple of years ago, my news director just said, ‘Hey, what are you looking for?  What do you want, career-wise?’” Glover recounts.  “I said, ‘Well, I would love to be able to do some longer form stories where I’m not just churning stories every day but get a chance to have some fun and be creative, and she said, ‘We could call it “Maury’s Stories,”’ and I said, ‘We don’t have to, but we could.’”

In this way, Glover’s namesake segment was born.  “I like that the name came about organically,” he notes.  “First it was a joke, and then it was real.  That’s fun…and cool.”  Much like the stories themselves.

Meanwhile, Glover’s life away from the lights and the camera and the action had been just as active.  “When I came out, I thought I was giving up the white picket fence, the spouse, and the American Dream, so to speak,” he admits.  The universe again had other plans for the gay black kid from Mill City.  He was introduced by mutual friends to his future husband, Tom Leuer.  Dating led to love, and love led to a commitment that has endured for nearly three decades (and counting), a commitment that was formalized comparatively recently.

“We wound up getting married about five, six years ago,” Glover says, his opaque voice lilting with the strain of recall.  “A piece of paper doesn’t ultimately define your relationship–neither of us was going anywhere—but, to be honest, it did lend an extra layer of satisfaction, of security.”

Part of that relational security owes its existence to a shared nose-to-the-grindstone-ness.  “[My husband] works for Macy’s–he’s in charge of their foods division, so he’s got a pretty busy job,” Glover notes.  “We have opposite schedules:  he works during the day, and I work at night, so we don’t really cross paths during the week.  I always say, ‘My husband’s a very patient man.”

That patience grants its own low-key rewards…in its own time.  “On the weekends, we just hunker down and are normal and boring and sit on the couch and watch Netflix,” Glover reveals with an unapologetic laugh.  “That’s our sanctuary.  That’s our time to hang out, to get re-acquainted, to relax before we have to go back out into the world on Monday.”

Back out into the world…where stories—the old and the new, the poignant and the funny, the quirky and the just plain weird–await their teller.  “I’m proud to do what I do,” Glover declares.  “I love doing this in my hometown.  I was born and raised here.  I’m a Minnesotan through and through.  I’m just happy to be here, to be part of the community, to tell people’s stories. I think it’s an honor, and I look forward to doing it for as long as I can.”