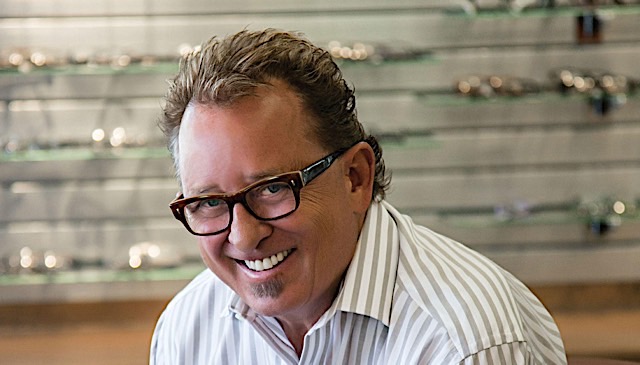 The eyewear store offering the largest vintage frames collection in North America—to the film and theater industries—is the same one that counts the likes of Bette Midler and ZZ Top’s Billy Gibbons as clients. It’s also where you’ll find the same vintage frames worn by JFK and Jackie O. among an extensive collection of custom and modern designer frames.

Minnesota’s own Spectacle Shoppe was born out of founder David Ulrich’s creative vision and passion for both the medical and artistic side of eyewear. As a military veteran who made glass eyes for his service members, Ulrich has a long history of helping people combine the medical necessity of eyewear with the fashionable and artistic statement that a unique pair of glasses can make.

Ulrich travelled extensively through Europe to buy frames directly from the factories, which is where he learned how they’re made and began designing his own. It’s also where he discovered a treasure trove of never-been-worn vintage frames to add to his collection.

“It’s not cookie cutter; you wouldn’t say this is a chain. If you walked into Grand Avenue or Uptown, it’s its own thing. But the one same thing they all have in common would be care in every aspect,” says Kristina Savoren, Spectacle Shoppe’s general manager and “Queen of the Seen.”

COVID may have changed things for Spectacle Shoppe, which once offered Coke and cookies to patients, but the attention to detail never wavered. While most eyewear shops will ship out prescriptions to be filled offsite, Ulrich is proud to have an in-house lab to grind prescriptions into the lenses and custom fit them to your frames of choice.

“When I was in the military, my training was in the lab designing lenses and manufacturing there,” Ulrich says. “When I got out it seemed normal; I wanted to have that aspect.”

Having an in-house lab gives Ulrich’s team full control over the quality of lens that’s going out to customers, with multiple quality inspections along the way. That means instead of waiting for weeks to get your eyeglass prescription filled, it is only a matter of days. Even better—if Spectacle Shoppe has the prescription in stock, you can walk out of your appointment with your glasses ready to go.

“We don’t have to worry about what type of product we’re getting because we are manufacturing it here and we can really customize how the lens works for each individual person,” Savoren says. “Some customers are like, ‘Well, it’s just a piece of plastic,’ but it’s not. It is crafted to improve your vision. And there’s a lot of technology that goes into making that lens.”

The Spectacle Shoppe keeps up to date with the latest technology and standards, using state-of-the-art equipment, which allows their team of specialists to craft lenses for prescriptions that many other optometrists can’t fill.

“We do get a lot of specialty jobs because we don’t have any ranges that we cannot make,” Savoren says. “There’s a lot of times that we get specialty prescriptions from the U of M, for example, where there’s a little baby.”

Ulrich chuckles as he remembers: “Putting a first pair of glasses on a little baby and seeing their eyes light up. They take them off and look and they can’t see, and then they put them on and they just smile.”

Since the pandemic hit, Savoren has noticed larger numbers of people coming in requesting blue light filters and computer lenses, concerned about the amount of screen time and its impact on their eyes. She’s also noticed an increase in safety lenses, having worked with major medical groups to supply wrap safety glasses to medical workers caring for patients on the frontlines.

From specialty prescriptions to run-of-the-mill reading glasses, the professionals at Spectacle Shoppe work with most major insurance providers to outfit you with a pair of glasses that fit right in with your own unique style. The one-on-one attention you receive from an optician helping you locate the perfect frames certainly feels like the luxury treatment.

Spectacle Shoppe also has a long history with the LGBTQ community. Whether it’s one of their doctors taking part in Pride events, hosting a drag show out back, or participating at the Gay 90’s, Spectacle Shoppe’s frames are world renowned.

If visitors aren’t taken aback by the sheer volume of unique and exclusive designs to choose from (both vintage and modern), then the atmosphere of the Spectacle Shoppe will surely take their breath away. If you visit the New Brighton location, say hello to the life-size Prince mannequin.

As Ulrich says, “It was always my dream to just make things different.”