“Scarlet Letters” – According to Dan Savage’s New Book, Sex Advice Is as Easy as A, B, C 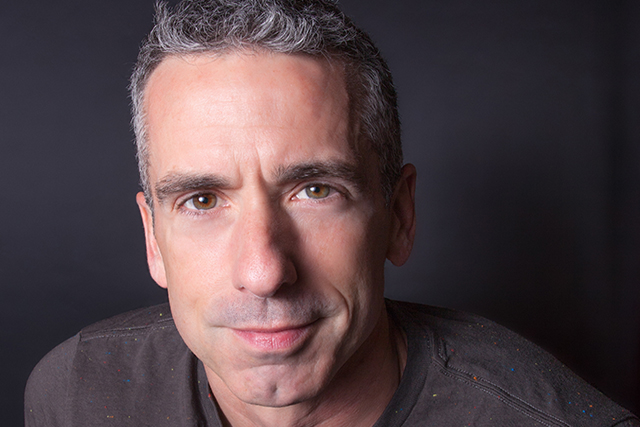 Some indulge in lilies, some exult in pearls—and sure, most serve cake, ideally a tall cake slathered in sweet frosting—but Dan Savage is celebrating his 30th anniversary by publishing a book. A book might seem like a weird decoration when contrasted with lilies, pearls and cake…that is until you realize that the celebrated relationship is with a newspaper column—an advice column, to be precise. A sex advice column, to be preciser. And in recent years, a sex and relationship advice column in print and online (to be precisest of all).

Three decades ago, at its genesis, “Savage Love” was a joke—not a joke as in “poorly written bad advice,” but a joke as in “to get to the other side,” ba-dum-bump-tshshsh, like, really, literally, Dan Savage’s first column was a joke. Savage remembers: when a friend announced that said friend was about to start an alternative newspaper in Seattle, “I told him you should have an advice column because everyone reads them. You see that Q&A format, you can’t not stop and read that.” One verbal ricochet and a sample column later, Savage got the job himself. “I was a fan of the genre, I had learned a lot from it,” Savage recounts, “but I was comically unsuited for the job.”

It was not a job, though, not yet—it was still a joke: the year was 19-furshlugginer-91, post-Stonewall and pre-everything else, when the gay kid started telling straight folk how to manage their locks and keys. Savage drew upon his fandom, recalling that all of the mainstream advice columnists rarely answered questions sent in by gay readers…and when they did answer them, the advisors treated the askers like lepers to be judged and loathed and judged some more. “Gay relationships were handled with special tongs,” Savage reports.

For comedic effect, the young gay guy employed those special tongs when advising he/she congresses. “I acted like heterosexuality was a tragedy.” He laughs. But a funny thing happened on the way to the other side: the column’s straight readers fell in love with the novel approach. The joke became a column, and Savage’s name became an adjective, his advice animated by an honesty that was as delicate as a grizzly attack, a clawed and fanged integrity that the columnist brought to his subsequent endeavors.

Yeah, “subsequent endeavors.”  See, where “Savage Love” is concerned, lilies, pearls, and cake notwithstanding, its author hasn’t been precisely monogamous…more like “monogamish” (to employ one of the column’s many original phrases). After some years of his sex-positive-with-a-little-sex-and-positive-added approach, Savage’s newly acquired expertise made him a sought-after TV pundit, and, while serving in that capacity, the sex columnist made himself into an activist, representing a community defined by his stock-in-trade.

Then, in 2006, Dan Savage fulfilled Andy Warhol’s timeless prediction, “In the future, everyone will have a podcast for fifteen minutes.” The Savage Lovecast operated (and still operates) pretty much like its older, woodpulpy sibling: advice-seekers leave telephone messages which are addressed during the show, often in consultation with doctors, therapists, and other experts in the Field of Boinkology. Savage’s trademark honesty made the podcast journey with him, but the destination left his signature tempered. “People tell me I’m more empathetic during my podcasts than I am in my column,” Savage says. “I guess hearing their voices makes a difference.”

That empathy-suffused honesty is on full display within Savage Love from A to Z: Advice on Sex and Relationships, Dating and Mating, Exes and Extras, a collection of never-before-published essays organized via that most alluring of filing systems, the alphabet. For instance, the first essay coagulates around the letter A, in a work entitled…um, it’s called…errr, well, strenuously paraphrasing here: “A is for ‘A Really NSFW Title.’” Y’know, maybe you’d better just Google it yourself…preferably in the company of someone you love.

Illustrated by frequent collaborator Joe Newton, Savage’s latest book is an extension of his belief that great sex starts with great communication. “Gay people have to communicate about sex,” he says. “When two people of the same sex go to bed, they get to say yes, they get to consent, and then they have a whole conversation about ‘What are you into?’ Straight people can avoid communication and often do because sex is difficult to talk about. Straight people get to consent and stop talking about what happens next or what they want.”

Whether or not its 30th year is commemorated with lilies, pearls, or bad carbs, Savage’s career has taken on myriad shapes…perhaps because its foundation has done the same. “Love is ephemeral,” Savage insists. “We need love; we’ve always needed love. I’m reminded of that Supreme Court judge talking about pornography—you don’t know what love is, but you know it when you feel it.”

And maybe that mercurial foundation is its own decoration. “We’re social animals,” Savage continues. “Sex creates bonds. It creates connection and intimacy, pleasure and release. Sex is the cake, and love is the frosting.”