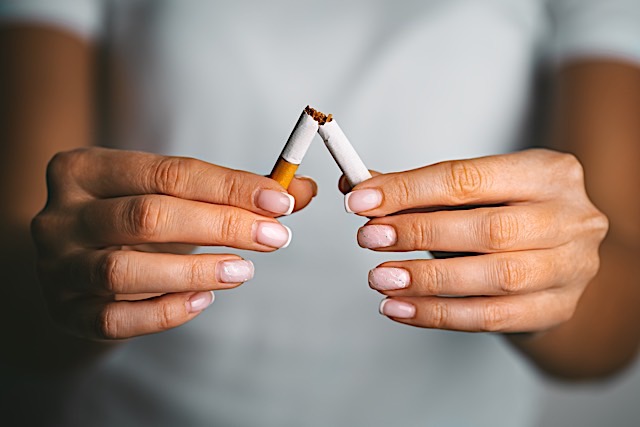 I remember when I was growing up, adults always talked about tobacco and how it was disproportionately advertised among young people, with packaging of major cigarette brands even mimicking that of gum and candy wrappers. There were anti-smoking commercials on Nickelodeon, and restaurants were increasingly removing their smoking sections. It seemed that everyone was on the same page: that big tobacco is harmful to young people. But this messaging neglected to mention something: that commercial tobacco products are impacting the LGBTQ+ community, too.

“LGBTQ+ people still smoke at a higher rate than the general population. Of the 2,8000 LGBTQ+ Minnesotans who participated in our most recent Voices of Health survey, we found that 33 percent currently smoke—more than double the broader population—and 20 percent recently vaped, compared to 4.9 percent in the broader population,” says Jeremy Hanson Willis, CEO of Rainbow Health.

For more than ten years, Rainbow Health has conducted community-based research on the health of LGBTQ+ communities throughout Minnesota.

“Tobacco use and vaping are higher in LGBTQ+ communities because we are targeted by tobacco and vaping companies with marketing for their products,” Hanson Willis explains. “In addition, our community also faces many other overlapping health issues such as mental health and chemical health. For example, our latest Voices of Health research found that 46 percent of transgender and nonbinary people felt anxious or on edge almost daily. Many of those people facing severe mental distress and trauma use tobacco and vaping to manage their stress.”

He adds that “tobacco companies and vaping companies primarily target LGBTQ+ people in direct media advertising and event sponsorships. They are among the most sophisticated marketing industries and spend a lot to understand and market to populations with higher tobacco and nicotine-use rates. There is also a lot of tobacco and vaping cross-marketing to BIPOC people, many of whom are also LGBTQ+ and are exposed to even greater marketing.”

Jen Cash, acting program manager for the Minnesota Department of Health’s Commercial Tobacco Prevention and Control Program, says that “as with all historically marginalized communities, social determinants of health have played a big role. Decades of discrimination in areas such as housing, employment, education, and health care have negatively impacted the physical and mental health of LGBTQ+ communities.”

There is a long history of tobacco advertising in LGBTQ+ publications, Cash says, which has often been in the form of full-page, full-color back cover ads with high visibility. “Those same tobacco companies also sponsor community events like Pride and have a history of handing out free product samples and other giveaways in bars that have been safe spaces for LGBTQ+ folks to gather and celebrate,” she says.

Hanson Willis points out that tobacco use, like many other health issues impacting LGBTQ+ communities, will only be solved by achieving greater equity in our health care system.

“When 27 percent of LGBTQ+ folks in our survey reported needing a doctor in the past year but didn’t seek care because they feared mistreatment, and when 26 percent reported being refused care because they were LGBTQ+, we have a big problem,” he says. “We need every clinic, every hospital, every treatment center to be a safe and welcoming place for LGBTQ+ Minnesotans to get the health care they need.”

Cash adds, “Commercial tobacco use remains the leading cause of preventable disease, disability, and death, and the impacts are consistently greater in communities that have experienced social, economic, and health-related inequities.”

While progress has been made, Cash says that there is still more to do. “We are grateful to be partnering with organizations like Rainbow Health on community-based initiatives like the Voices of Health Survey of LGBTQ+ Health in Minnesota and increasing awareness of and accessibility to services like Quit Partner,” she says.

“Tobacco use is higher among BIPOC generally,” Hanson Willis adds. “In our research, 24 percent of Black LGBTQ+ people smoke compared to 16 percent of white LGBTQ+ people.”

Despite the alarming statistics, Cash is confident that, with the help of the Minnesota Department of Health’s free services, Minnesotans who would like help to quit using commercial tobacco products have support.

“LGBTQ+ folks haven’t always had good experiences with health care providers and systems and need to be able to trust programs like this,” she says. “Quit Partner has developed inclusive programming that includes knowledgeable coaches and support materials dedicated to the LGBTQ+ community.”

Quit Partner can be reached 24/7 by calling 1-800-QUIT-NOW or visiting QuitPartnerMN.com.