Personal Pronouns Change the World One They at a Time 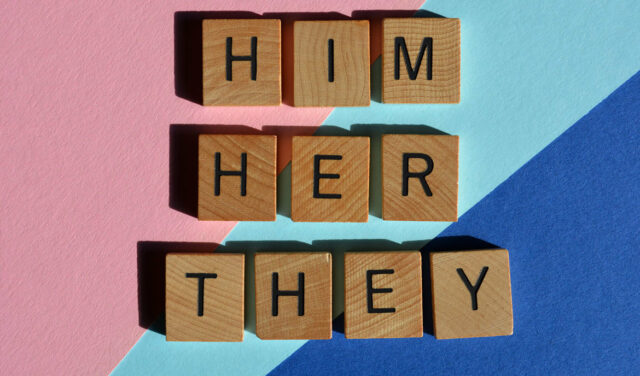 These were titles considered and rejected for the publication that debuted in January 1972 as Ms. Magazine.  The periodical was intended as a voice for American feminism, of course, but its settled-upon name also represented the furtherance of an ongoing cultural debate.  Women’s libbers were championing the wide use of the magazine’s titular honorific, a marriage-status-neutral shortening of the word “Mistress,” as a replacement for the domestic-situation-dependent Mrs. or Miss.

And, as such a furtherance, Ms. Magazine was entirely potent.  Just one month after the publication’s debut, the US Government Printing Office approved using Ms. in official documents, plucking the expression out of society’s bra-burning fringes and shoehorning it into the Yankee doodle zeitgeist.  Although the consequential transformation of language and culture might have felt overwhelming to some—The New York Times used Mrs. and Miss until 1986, for instance—the eventual orthodoxing of Ms. represented a critical affirmation of American women.

This nuanced notion of identity demands a nuanced application of language, especially of  those sentence-efficiency-lending third person terms that occasionally substitute for proper nouns, known by word researchers as Personplaceorthingus substitutnus, or pronouns.  The key to understanding this issue is that it’s gender which is reflected in pronouns, not sex—in other words, it’s not the parts, it’s the self-perception…hence, the potential complexity.

Managing this potential complexity might visit breath-shortening discouragement upon the well-meaning, pronoun-wielding Describer, but soldiering through bestows rich rewards.  The proper use of pronouns affirms the selfness of the Described, acknowledging that that person knows more about his, her, or their intimate identity than the Describer.

Such affirmation catalyzes an inclusive environment that’s important everywhere but is especially vital at school.  “Research shows that students, especially when they belong to the LGBTQ community, achieve greater academic success, and experience a better school climate when they attend education institutions with an inclusive curriculum,” professes Lingoda, an international online language school, on their website.

The societal challenges of transgender affirmation aren’t relegated to the loopy algorithms of a handful of marginal websites—they’re scrawled across today’s national headlines.  “Language use in US schools and education is a contested issue,” Lingoda notes.  “The Florida senate recently approved a measure dubbed the ‘Don’t Say Gay Bill’ which would prohibit school discussions related to sexual orientation and gender identity.”

Like the America-wide adoption of Ms. fifty years ago, using the correct pronouns today may not make headlines when done individually, but doing so will speak volumes about the Described…and the Describer, as well.  “It’s important to validate and recognize trans and gender non-conforming people by using their correct pronouns and gender neutral language in English,” Lingoda concludes.  “It says, ‘We see you, and you exist.’  That is powerful for the LGBTQ community.”

For more information on Lingoda, log on to https://www.lingoda.com/en/