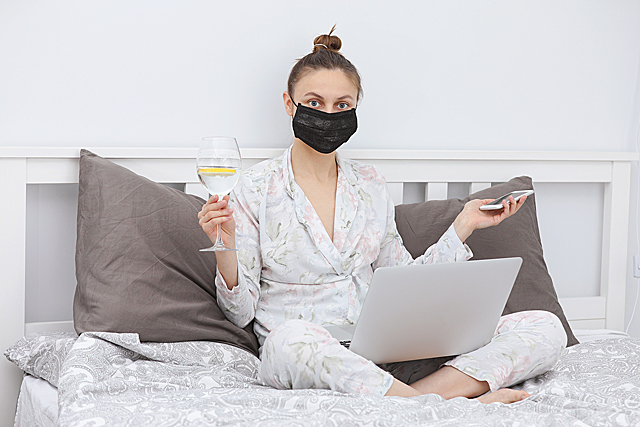 Dating is rough in the best of times, but when you add a worldwide pandemic to the usual cocktail of mixed signals, ghosting, and awkward first dates, the whole enterprise kind of starts to feel like a lost cause. I know I am not the only one who started to question my singlehood as my social media feeds filled with partnered friends doubling down on their commitment to each other. Babies, engagements, sparsely attended weddings. It was a weird year to be single.

So what was this year like for other single folks? I didn’t even download a dating app until I was assigned this story and when I did I was mildly surprised to actually find people there. Since then, I have relentlessly pursued the answers to my most burning questions, which are hopefully also your most burning questions. Did people go on casual dates and have casual sex? How did people meet people and what kinds of rules did they set for themselves and their partners?

A couple notes before we kick off. This was far from an academic sampling. I found a decent cross section of mostly queer people who dated this year, but I stayed local to Minnesota and I did not talk to COVID-deniers, figuring that if dating was harder for them this year it was not because they were doing anything differently. I changed one name.

This year has been an exercise in consent as people figure out how to navigate varying degrees of caution as it relates to the pandemic. “People have had to adjust their expectations for 2020,” says Jamie, “A lot of people have updated their profiles to speak specifically about what they’re comfortable with during the pandemic.”

Most of the single people who I spoke to agreed that online dating stayed online for longer than usual. “I’m typically [the] kind of person that will text for only one maybe two conversations then set up something in person,” says Stephanie. However, because Stephanie was living with a high-risk roommate at the beginning of the pandemic, she had to find digital ways to connect.

“My main form of communication was texting,” Stephanie explains, “I also shared some snapchats and even had a few ‘movie nights.’ We would watch the same movie at the same time and message about it.”

Provided digital courtships went well, in-person dates were almost inevitable. “We…got to know each other on below the surface type things,” says Ana, “I knew it was going somewhere, so that was part of [why I was willing to meet in person.]… Also I was getting tested since I was on the road for work, so I’m sure that made him more comfortable.”

Only one of the people I interviewed did not go on any in-person dates and everyone appreciated folks who expressed caution on their dating profiles. “I am heartened by photos of people wearing masks with messages stating that they won’t meet up until the pandemic is over,” says Matthew, “I did meet up with someone outside of a brewery in late summer…[t]hat was about the max of my comfort level.”

Outdoor walks have been the gold standard of COVID-era dates, although some people got creative. “I saw two people on a date at a park,” Stephanie says, “They each stayed on their own picnic blanket over 6′ away from each other and chatted. It looked like they were using air pods…so they didn’t have to shout. They were radiating chemistry.”

Alice met some people she later went on dates with at parties her friends hosted. These parties had strict rules, including negative COVID test results, staying outside for the duration of the gathering, and staying home if you felt sick. The group that hosted the parties has “a motto of radical self-expression which garners a lot of accepting what the present moment is. So, pandemic. Okay. We don’t want to die or get anyone sick, but we want to see each other. How can we do this?”

I asked Alice if she ever skipped parties because she felt sick and she said yes. Shortly after that skipped party she found out she had COVID. “A few of us have had it, but we’re almost certain it wasn’t from gatherings outside [because the] timeline doesn’t match.”

To answer your nosiest question, yes, people were hooking up this year. Half of the people I spoke to had sex with a new partner at least once during the pandemic. Some folks anticipated relationships getting physical and made sure to have a conversation about COVID rules first. “If things crossed over into the physical realm I had a conscious conversation of ‘want to be in each others’ exposure group?” Stephanie explains.

Other situations were more organic. “I didn’t feel comfortable going to restaurants so [after several socially distanced dates] he offered to cook me dinner,” says Ana, “and, well, just things led to the next thing and I couldn’t resist because I was a lonely, lonely girl.” She laughs, but it’s a relatable sentiment. A lot of us have found ourselves craving connection during the pandemic because it is in such short supply.

Conversations surrounding COVID precautions seemed easier to broach with new flames than old ones. “I’m fairly certain I got COVID from my ex,” says Alice. “Once she started going indoors, I had issues with it and we bumped heads.”

Things have shifted in the last couple months for two reasons: the availability of the vaccine and the arrival of winter. “There’s no way I’ll agree to real dates until I get vaccinated,” says Matthew.

Dating “felt safer in summer and fall,” says Alice. People who have partners now have fit them into their COVID bubbles, but looking for something new and in person is mostly on hold for the moment. Not many people want to do outdoor dates in subzero temperatures. “If I feel like punishing myself, I could invite someone to go on a walk with me outdoors in the middle of a Minnesota winter,” Jamie laughs, “I don’t hate myself that much yet.”

Looking forward, I anticipate a few brave souls meeting up for chilly Minnesota walks and other outdoor activities, but most people maintaining their distance because of the pandemic. It is a little cliché but check up on your single friends this winter. Some of us are happily independent and some are longing for romance, but most of us have had at least one moment this year where we felt crushed by loneliness. Here’s hoping for a short winter and a fast roll-out of the vaccine so we can leave the dating rituals we learned in 2020 behind.