Our Pets, Our Companions, Our Friends 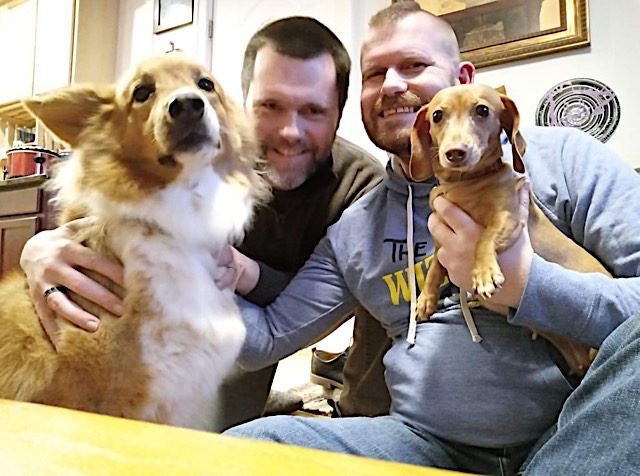 Sassy and Roo with Tommy and Kyle. Photo by Thomas Rosengren

There was a time when the only adoption we could do was for a pet. Nowadays, pets continue to be our companions, whether we are single or have a huge family around us. Our companions call to us when we’re home – and when we’re not. They also complete our lives.

We asked you – including our own staff – to tell us about your pets. Here are your responses…

And, here’s to our happy companions!

“He is the best dog ever!!!!  I adopted him from a friend in March of 2021! He was afraid he wouldn’t take to me, but he crawled into my lap not even being 5 minutes in my apartment and we have been besties ever since! He’s a mixed breed Chihuahua! I call him King Meeko because I’m a king too and I treat him like royalty! He has hoodies, sweaters, tank tops, and 3 kinds of food! lol! We walk everywhere together, take small trips, he gives me the best hugs, and when I’m sad he always curls up to me. His energy knows no bounds but I also love that we can chill and watch a movie. He is my family, my everything and I try to tell him I love him as often as possible because I wouldn’t be here if it wasn’t for him.”

“Miss Kitty showed up in my doorway around 2005.  I was working on my flower garden. I was going in and out of my apartment and I thought I tripped on something.  When I looked, there was nothing there.  Then the second time I tripped, there she was, a beautiful kitten with huge saucer eyes and giant ears.  She looked up at me and meowed.  So I gave her tuna and water.  To my surprise, she came running every time she saw me coming home from work.  So I kept her!  She died on March 16, 2020, after many years of reoccurring urinary tract infections.  People often say they rescued their cat: I like to think Miss Kitty rescued me.  She arrived in my life when I was going thru some rough times; she gave me someone to care for, which in turn, saved me.”

SUSAN AND DARCIE MASON AND MAY

“We saw May on the Coco’s Heart website. They’re based out of Hudson, WI. Darcie and I got to meet her at her foster mom’s over the weekend, and it was a great first meeting! What we know is that May was born sometime in January and is a shepherd mix. Last night was the virtual home visit and it went well.  She will come home sometime next week after she’s fixed. Naturally, she is going to be spoiled like crazy!”

“Roo was a rescue dog that we adopted and fell in love with immediately. She is a loving fluff ball who loves hugs and is friendly to everyone she encounters. She exudes love and she has been the light in her daddy’s eyes! She loves long walks on Victory Memorial Parkway

“Sassy was born on a farm in west central Minnesota. She was an unwanted puppy in a litter of other puppies because she had a cyst on her stomach. She was rescued and came to live with Tommy and Kyle in the cities. Being a country pup, she took a while to acclimate to the city life but she loves it here, and both her and Roo also love their visits to Tommy’s parents’ farm near Belgrade where they can run free with their seven fur cousins on the farm!

“Sassy and Roo are two of the most loving and caring fur babies … they love their cuddles and their snuggles and they truly keep their Daddies busy.”

“This is me and Axl, my quarantine cat. He was in a shelter and I was very lonely working from home during the early part of the pandemic. We saved each other. We love each other so much!”

“Captain & I just moved to Loring Park in May from Omaha, NE. Captain is a 7 1/2 (8 on 4th of July) year old schnauzer/Cairn terrier mix. I rescued Captain from an Omaha area shelter in April 2018. He is a former east Kansas farm boy who I believe came from a hoarding situation.

“Captain has always had the sweetest nature & has the purest soul I’ve ever encountered. He rarely meets someone he doesn’t like. He is very in tune with the emotions of everyone he meets. If he can sense someone needs extra love, he’s right there for a kiss, nuzzle, & cuddle. Several people have told me he’d make a great therapy dog.

“His favorite parts about moving to the Twin Cities are all his new friends (human & canine) & having a big park just down the street.”

“My cat is named Mysa (which is a Swedish verb for “cozy”). Mysa is an adoptee, a Bengal, and the definition of an independent woman. Over time I have convinced her to enjoy the little adventures I take her on – camping, hiking, and taking neighborhood strolls through St. Paul. We have also built up quite the repertoire of tricks: she can sit, stay, come, spin in a circle, shake my hand, and jump onto my shoulders. I keep hoping that I can also teach her to love cuddling, but aside from an absolute obsession with belly rubs, she is pretty stingy with affection. I kind of love it, though. I’ve had her for a year and a half and I still feel special every time she sits in my lap or sprawls across my leg.”

“This is Wanda who I adopted about a year and a half ago. She’s my little magical black cat and is named after the Scarlet Witch, of course. This past spring she turned 3 and she’s the absolute sweetest. She loves gazing out the window, cuddling while we watch movies, and playing with shoestrings.”

“I have three dogs who are the absolute joys of my life! Kyla is a Basenji, an ancient breed of African hunting hound. I’ve owned Basenjis for over thirty years, and have shown them in AKC shows much of that time. Kyla is my heart-dog in every way, my constant companion, and my retired show dog at six and a half years old.

“Ghillie is a six-year-old Scottish Deerhound and my current show dog. He’s an AKC Grand Champion, and we’re working on his Bronze Grand Championship. These dogs were used for centuries in Scotland for chasing down and hunting the huge red stags over the Scottish moors, and are the sweetest and gentlest of giants. He’s our second Deerhound and will not be our last!

“Oberon is a four-year-old Podenco Ibicenco or Ibizan Hound. He is a rescue dog from Spain, and I went over to Madrid, Spain to bring him back along with five other rescued Podencos and Galgos (Spanish greyhounds) for a rescue group called The Sighthound Underground. These rabbit hunting breeds are horribly abused in the rural areas of Spain, so I have supported a couple of rescues for a number of years before we fell in love with Obie’s photo on Podenco Friends’ site and applied to adopt him. He has been the sweetest, funniest, most clownish, loving and challenging dog that I’ve ever owned, but I wouldn’t change him for the world. He makes me laugh every single day.”