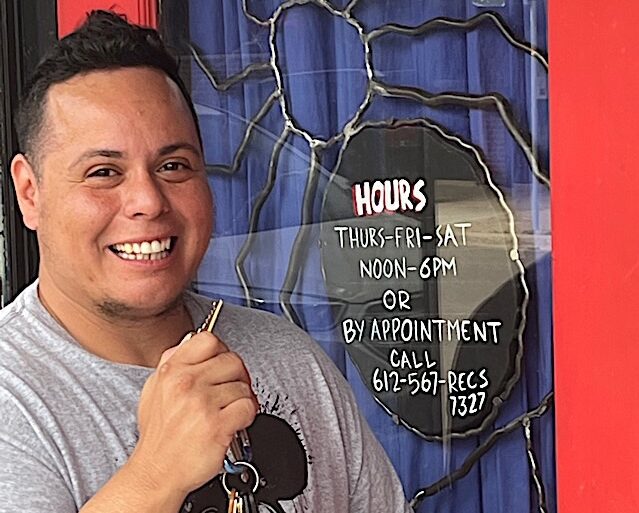 On June 30th, Wizard Wax owners Ben Menas and Cal Woods will hand over the keys to artist and educator, Jex Arzayus.

Wizard Wax,commonly referred to as “The Wizard” is a jem of the city, known for its $3 LP bins and variety of 45s, as well as diversity of comics, and Jex Arzayus said he will continue to build off the customer base already established. But, he’s also committed to something more.

“As a Latinx transman, I want the store to reflect everything I am. I want it to be queer and BIPoC focused and artistic, and I want people to come into the store and find comics and records they can’t find anywhere else. I also want the Wizard to be a hub for queer and BIPoC artists to gather and feel supported,” said Jex. He added, “And we’ll be a site where you can sign the petition to get community control of the police in Minneapolis. Transphobic violence is at an all-time high and business owners can do their part to create a safe world for everyone.”

Ben Menas said he can’t think of anyone better to take over ownership of the record and comic book store. “Jex is 100 percent the reason why it wasn’t put on the market and shopped around to the highest bidder. Jex is someone who I want to have in the neighborhood and do business with and work together,” he said.

Before the pandemic Jex and Ben met as vendors at TimeBomb, both buying and selling toys, records, and clothes for their rented spaces, both dreaming of becoming business owners someday, but not sure of the path to get there.

“I’ve always been entrepreneurial and business-minded. There were many times when an invention would happen and I’d think, ‘Damn, I had that idea years ago.’ But I never knew it could become a reality because of my credit score and inability to get a loan. As a brown transman, I never thought I’d be able to own an actual store of my own, said Jex.

According to a local business publication, less than 3 % of Asian, Latino, and Black adults in the metro area own businesses, which is less than half the rate of ownership among white adults. Hispanic ownership in Minneapolis is far lower than the national average.

Before getting into the record business, Menas  worked at Summit Brewery for 14 years, working his way through the packaging line and production floor to become the canning supervisor. Although he liked his career and continues to drink Summit to this day, he said he always dreamed of carrying on the family legacy of owning a store like his father who started a television repair company in Texas. He recalls sitting in his father’s store after school and dreaming of owning his own store too one day.

“When the pandemic hit, I was surviving solely on a big record collection that I purchased to resell online,” said Menas. “I was always hanging around TimeBomb trying to learn the business and that’s when Cal Woods approached me to see if I wanted to go in with him and buy the empty store around the corner. We compiled collections and after 4 or 5 months, we turned what was once a massage parlor into Wizard Wax.”

Then in May of 2021, Menas was offered the opportunity to buy out TimeBomb as the sole owner. Menas said, “I didn’t have time to run both stores, so I knew I needed to sell Wizard Wax and here was Jex always hanging around TimeBomb just like I always did. I loved that I could pass off a business specifically to him. He’s a nerd like me and not phased by anything. He is tough and will always have my back. That fact that we are both Brown is a great bonus to the community”.

Wizard Wax will officially be open under the new management July 2nd. The hours of the store will be 12-6 p.m. Wednesday-Sunday.