Love and Marriage with Mike Augustyniak and Eric Henderson 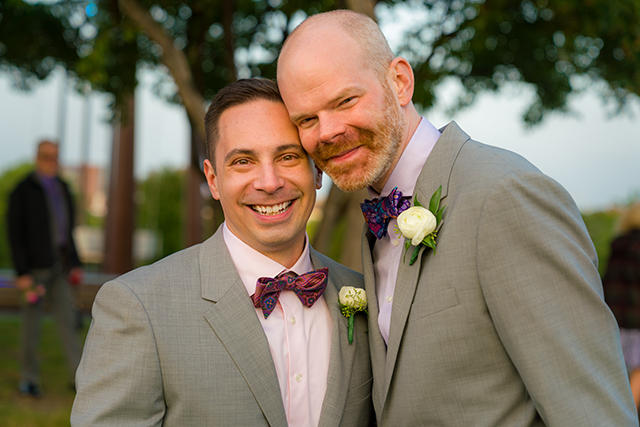 Like many modern married couples (one in ten, to be precise), Mike Augustyniak and Eric Henderson met at work. Specifically, on Mike’s first day in the WCCO Minneapolis office. He was visiting WCCO to interview for the then-vacant Director of Meteorology position. “It was kind of like an instant crush on my part,” Eric admits with a short laugh “I saw [Mike] enter the room, and I thought ‘well, I hope they hire him.’”

Years later, the two would transition from coworkers to friends to husbands, but for their first actual introduction, Eric (then a WCCO Web Producer, now Web Content Manager) wanted to make the moment really last. As a new hire, Mike needed his photo and bio taken for the WCCO website, and, coincidentally, Eric was the photographer. What would normally be a quick, five-minute process transformed into the couple’s first official meet-cute, slyly orchestrated by Eric: “I took him to probably, I don’t know, a dozen different places in the building with different backgrounds. I just tried to make it last as long as I could.”

Despite Eric’s efforts, however, the flirtatious elements were somewhat lost on Mike. “There’s a history here of me–I’m such a literal person,” Mike explains, “and such a science mind that unless you hit me over the head with something, I’m probably not going to understand the subtext of it.” As the new Director of Meteorology, he had other things on his mind, and making a good professional impression was one of them. But what’s clear about this meeting was that the two of them could not only work well together, they could have fun while doing it. “I remember specifically . . . we were both goofing around where I was, like, lying on a couch doing one of these things,” Mike tosses his forearm to his head as if he were about to faint as he describes the extended photoshoot.

Like many recently-married couples, Mike and Eric were faced with the inevitable decision of what to do with their wedding plans when the pandemic struck. While the original plan involved multiple receptions–one in New York and one in Minneapolis–the rearranging of which would be a standard wedding planning headache, one of the more manageable elements was the wedding ceremony itself. “The wedding was always going to be a small, family affair, the actual ceremony,” Mike clarifies, “the only thing that changed because of COVID was the location of that.” What was originally planned as a week at Martha’s Vineyard (a favorite vacation haunt from Mike’s New York social circle) became a Thursday wedding in Minneapolis’ Gold Medal Park, a much more public venue that came with its own perks.

“It was fun to sort of tip off our own wedding crashers,” Eric reminisces about the added benefit of placing the small ceremony in a centralized location, “to let them know, ‘Hey, [you may not be] officially invited to the wedding, but if you happen to be in the park between these two times, you might see us get married there.” Those of us reading who have attended a wedding in a public park (or any outdoor wedding) before know that there’s always some small element of chaos when planning a wedding open to the, well, elements.

Luckily for Eric and Mike, a handful of picnicking park-goers got the hint from the official-seeming wedding photographers and graciously scooted over, but not before causing some confusion for the arriving wedding party. “We didn’t reserve [the park]” Mike begins to describe his rising stress upon arriving at the venue, “I was pissed because it was a Thursday night and we’re walking to the top of the hill, and I’m like ‘is somebody else having a wedding on a Thursday night? I am not a bridezilla, but my mind went to the worst possible place.” What Mike assumed was another wedding party was a mix between park-goers and their own wedding photographers, and once the ceremony started, everything went according to plan (including a dinner at Spoon and Stable–a restaurant also listed as a favorite on Mike’s WCCO bio page).

One relocated ceremony and two receptions later, Eric and Mike have a few pieces of advice for couples looking to plan a wedding with a global pandemic in mind. “If you can be psychic,” Eric jokes, “and know that your biggest reception in Minneapolis just happens to fall after the vaccinations have taken hold and we all think we’re going to be out of the COVID pandemic . . . that’s what you need to do.”

But as a piece of advice, there’s some truth to this: thinking about the last couple years of the pandemic, timing (and the willingness to be flexible with the timing) of wedding-related events seems to be key to success. And to those of us who sweat at the idea of planning two receptions, let alone ones that aren’t all on the same day or venue as the ceremony itself, Mike’s advice is to “split it up, so you don’t cram all of the exciting, fun, stressful parts into one, 24-hour period.” Because if you only get one wedding, according to Mike, “Why would you not want to spread out the love and the enjoyment and give yourself a little bit of breathing room?”

When asked about if life as newlyweds has changed their relationship, Mike and Eric had an immediate answer:

Lavender Magazine: Do things feel different from when you started dating?

Eric: (Laughs) No.
Mike: No. I’ll lean to the fact that we’re, uh, “gay old.” (Laughs)
Eric: We’re old old now.
Mike: When you get married in your early forties, I think most people have a much better sense of who they are and what they’re interested in than–certainly I can speak for myself–than I did when I was in my twenties. So, no, I mean, now we’re getting to the good part of the relationship where we do just get to sit on the couch together and watch Netflix and call that a fun night.
Eric: Some of our coworkers who maybe without knowing, knew that we should probably should end up together. They used to refer to us as an old married couple, even when we were friends.

Dating as coworkers, too, has proven to be its own challenge for Mike and Eric, who describe the experience as “complicated” when it comes to managing your partner’s stress about a workplace and coworkers that you both share. Additional advice for those considering an office romance is being “work friends first” and trying your best to make sure, when having important conversations, to “make sure your home life and your work life are two separate zones as much as possible.”

And on the subject of relationship advice, sans-work dramas, Eric and Mike have a few takeaways for newer couples. “The money and time I’ve spent with a therapist has probably been the number one factor in getting me to a point where I am a good partner,” Mike says, naming his key to relationship success as a self-described Type-A person, “to understand where other people are coming from, both in relationships at work, but also relationships of the heart.”

For Eric, the advice is a bit more straightforward. “Know when to let your partner choose the music,” he mentions, while Mike laughs knowingly, “sometimes you just need to know when the other person needs to be in their happy space.” (Speaking from this writer’s personal experience, Björk can be a polarizing music fave in certain gay circles, and this relationship is no different.)