Looking Back At The Life Of Lee Roehl 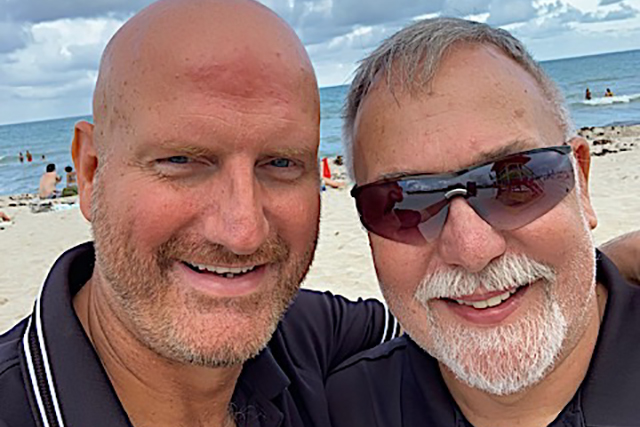 He was a husband, a friend, a former teacher, and a tax man. But most importantly, he was loved.

“Lee is the quintessential ‘hero.’”

That’s what Lee Roehl’s husband, Tim Salyers, says of his late partner, who passed away in April after his Stage 4 esophageal cancer metastasized to his liver and lymph nodes.

“His business acumen is only equaled by his humor and his generous heart. His tax clients adore him.  He taught first grade for twenty-two years and, if I had to boil it down to a few kind words, Lee is a man to be admired and I’m honored to be married to him,” Salyers says. 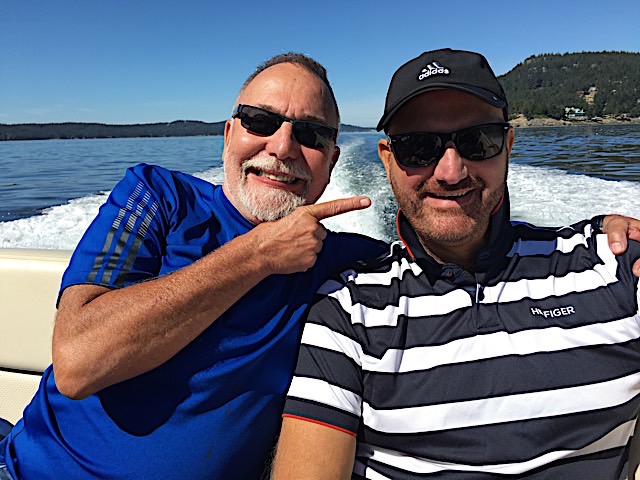 Salyers and Roehl were together for more than four years, after meeting by accident through a mutual friend. “I will be forever grateful to Karl Stote for introducing us,” Salyers says.

Until the very end, Salyers and Roehl were lovesick for each other, Salyers says. 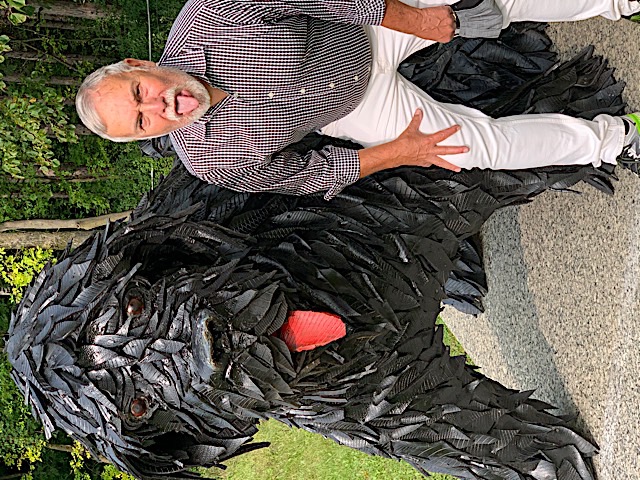 “Lee called me up to ask me out on our first date. I’d been through this routine before where a date ends up being invited over to someone’s house, or worse invited to meet at a coffee shop.  So I told him sure but only if he actually plans a real date,” Salyer says. “He was challenged and kept the whole date a surprise. He picked me up and we went to the Guthrie for standby tickets. Tickets to see a play would not have been my choice for a first date because you can’t talk or see the person you are trying to get to know. Now Lee also had a back up plan which was such a Lee thing to do. We were twenty-second in line for possible tickets, so I asked what his backup plan was because it didn’t look like we were going to get tickets for the Guthrie. His response was that he made reservations for 7 p.m. at Bachelor Farmer.  I responded with, ‘Well, let’s get the f*ck out of here!’ Lee gave this infectious grin and we ran all the way to Bachelor Farmer to make the reservation. We arrived at 7 p.m. and talked about everything over dinner and there might have been a martini or two and some wine involved. We ended up shutting the place down. Lee is that fascinating to listen to and talk with. We’ve been together ever since.”

At the end, Salyers and Roehl were still inseparable.

“Lee had more of a struggle with it than I did, but we bonded even stronger because of it. In the mornings, we would hold hands and have music hour which tended to last into the early afternoon. I’d drink my coffee and he might have an Ensure. We would listen to Taylor Swift. He was not familiar with Taylor Swift but really enjoyed the music.  We would just stare at each other or I would tell him stories or read poetry to him. After all of this, this special time with him is what I will miss the most with him. That, and his infectious sense of humor,” Salyers says.

Though he is gone, Salyers keeps Roehl’s memory alive at their home, Wooddale House.

“It will never be sold. I will just keep adding to it. Currently, I’m laying brick on the south garden to create a quiet place to contemplate and relax in the shade. Maybe enjoy a cocktail. I planted two espalier apple trees in his honor,” he says. 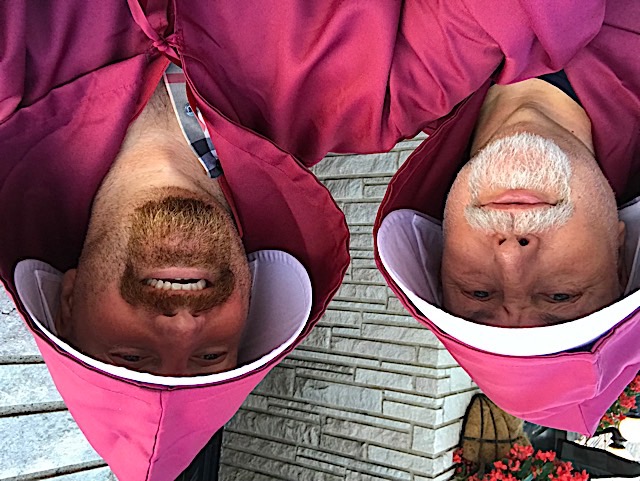 Before Roehl left, he asked Salyers if there was anything he wanted “from the other side,” which caught Salyers off guard since they were not very religious.

“Can you finally make the daffodils bloom?” Salyers asked. “Several years prior he had planted so many daffodils, while I planted tulips. Not one of his daffodils had ever bloomed. Until this spring, after he passed the daffodils in the front lawn and boulevard bloomed profusely. This also brought me great peace,” he says.

“One night after he had passed away, I was feeling really sorry for myself and went and sat outside on my bench,” Salyers adds. “It was around 2 a.m., and as I’m sitting there a huge red fox walked up into my front lawn about twenty feet away from me. I called out and said, ‘Well, hello there!’ He looked up and saw me and then carried on his way into the neighbors yard. For some reason, it was very cathartic, and brought me peace.”

Though being a husband to Salyers was certainly Roehl’s number-one job, he was also greatly loved at ROR Tax Professionals, which he cofounded.

Mike Cassidy, who worked with Roehl, remembers the time he got to spend with him fondly.

“I went on vacation with a friend, Kyle Gunderson, to Mexico. On the flight home he recommended I call Lee about joining his team. Lee and I met on New Years Eve day for lunch to discuss working together. It was easy for us to be fast friends,” Cassidy says. “We worked together almost every weekday for fifteen years. Some days he was all sparkles, some days he was the most stubborn person I’ve ever met, some days he was the greatest mentor I ever needed, and on others he could induce an eyeroll or two. He was Mr. Personality and the Networking Queen. He was himself. Every. Damn. Day.”

“When I first started to work for Lee, I was all corporate. I have to admit that my sensibilities would get offended a little too easily,” he adds. “On a trip back from a tax conference, Lee and I had a long talk. He said, ‘Just be yourself, and everyone will love you.’ I don’t know if I’ve been told anything more important in my life.”

“He was a community leader. He thought of himself as someone that had something to share.  He was a community resource to help folks make good financial decisions, so their finances were healthy so they in turn could give back to the community,” Cassidy adds. 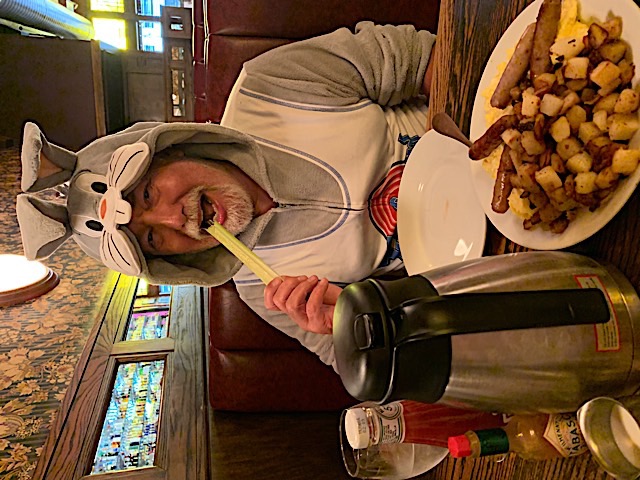 Lois Carlson, the senior vice president of UBS Financial Services, Inc., shared many clients with Roehl and considered him a “good hearted, generous, and lively man.”

“He was full of energy, full of ideas, and genuinely interested in helping his people prosper. In addition to having an outgoing personality, he had a sense of humor. As a tax advisor, he knew his data, he was an expert like no other,” Carlson says. “When we [the LGBTQ+ community] were NOT legally married for tax purposes, he was the genius to help. He knew how to apply the strategies and maximize deductions for us.”

“Lee and Scott Mayer and I wanted there to be a strong LGBTQ+ organization for business. and the LGBTQ Chamber of Commerce was born!”

Roehl was involved in the formation of the LGBTQ Chamber of Commerce, as helping the community thrive was very important to him—something that has been proven in the work he did and the people he surrounded himself with.

Lee, you will be missed.