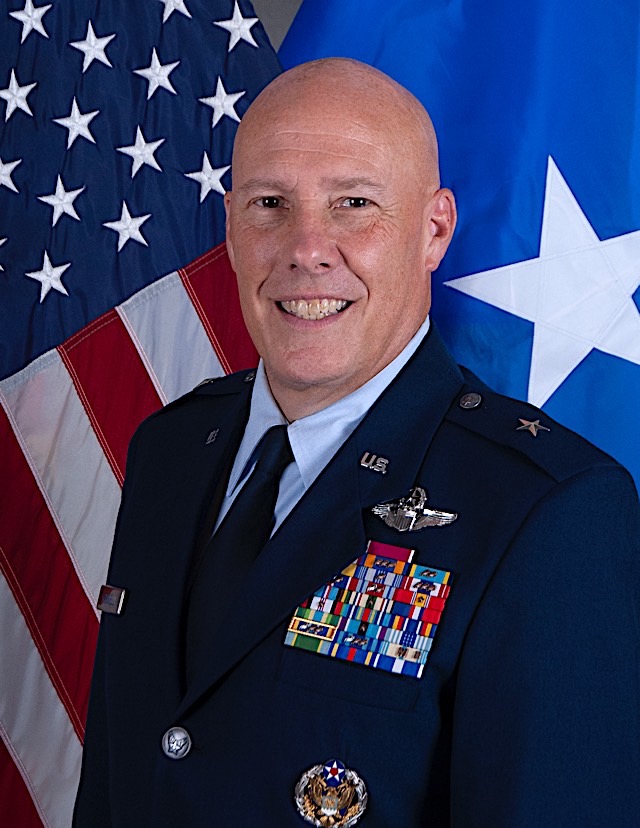 They say life is a gift. The unwrapping of life’s present is usually a cascade of mysteries of the unknown. No matter the qualities of what you get, they can all be categorized as one: experiences. Brigadier General Dan Gabrielli, the Assistant Adjutant General for Air, Minnesota National Guard says, “It’s the gift of experience that makes you better, but you have to fight for experiential opportunities throughout your life, and move out of your comfort zone to take them.”

General Gabrielli was born and raised in Saint Paul, Minnesota. Along with his wife and their three children, his journey through life was fueled by a yearning for new and rewarding experiences, which has resulted in an illustrious career of accomplishment and personal fulfillment that may carry the key to unlocking happiness. After studying political science and interning with the British Parliament he was primed and ready to continue into law, but he could never shake the natural lift that would carry him to fly. He effectively joined military service by attending Officer Training School and Pilot Training, and was commissioned in 1989. After ten years serving in the Air Force and a family starting to form, he took the opportunity to transfer to the Minnesota Air National Guard. In the past 33 years of his career he has over 22 years of combined active duty through assignments and deployments. He has also managed a commercial pilot career with United Airlines.

General Gabrielli admits to being prone to regrets, that no matter how well he did, he’ll have thoughts on what he could have done better. “When any setback happens you have to use that as a catalyst to become better,” says General Gabrielli, but “I always say just wait 20 years and then look back.” Looking at mistakes or decisions from the vantage of the bigger pictures shows that if things didn’t transpire exactly as they did, they never would have ended up where they are now. For General Gabrielli it is in a position of leadership and the ability to create change. He says as long as, “you approach everything from a position of humility and curiosity, you will make more inroads of influence and respect than you can imagine.” A commitment to longevity leads to longevity as long as you stay available to take every opportunity to learn from.

That also takes shape in General Gabrielli’s leadership of fellow military members he’s commanded over the years. In order to lead you need to experience what you’re overseeing. He steps away from being just an overseer to stepping alongside those he leads and doing their work with them. “I try to let them know that I really am one of them, even though I feel like a young lieutenant inside because I’m still learning,” says General Gabrielli, “I am not a leader as much as a talent manager.” Being surrounded by all the young talent he has to funnel and direct, he still gets intimidated by all their abilities. He’s realized that people pay attention to what leaders do and found that modeling the culture he is trying to create brings the most success and perpetuates the desired productivity of helping others. “If you’re doing the right thing, you’re among them, and you’re one of them, there’s no pretense. That breaks down a lot of barriers right away”, says General Gabrielli.

His ability to see the value of the younger and more diverse generations has put him at ease that the future is in good hands. He doesn’t put much stock in generational labels or the boxes the experts try to put everyone in. Every generation has been the same since humanity started, “the young ones are always innovative, a little bit rebellious, and they confuse the older ones,” says General Gabrielli. “I think they’ve all been the same. They all want a sense of purpose and to do the right thing.”

Aiding them in finding that purpose is what brings General Gabrielli the most fulfillment in his work. To connect more to their purpose, he has become a warrior for diversity and inclusion. General Gabrielli serves as the senior mentor to the Minnesota National Guard’s LGBTQ Special Emphasis Council among other key diversity initiative roles. He’s gained inspiration from his daughter, who is part of the LGBTQ community, she has taught him so much about resilience and being your true self. He recognizes that while there have been improvements in the realm of diversity recruitment, there are issues with retention. “If they don’t see themselves in an enduring manner in that unit, they may not reenlist and that’s where we tend to lose them,” General Gabrielli explains. “If you get enough of those demographics to stay, then it builds on itself, and then the retention comes when you get the senior leaders that are diverse.”

What impresses most about General Gabrielli, after all this accomplishment and rank, is his maintenance of modesty. “People look at me like I’ve got it all figured out but I don’t. I’m really learning from them.” As well as a commitment to progress, in life, and working with the Minnesota National Guard. He says, “it’s the sense of mission, sense of purpose, and working with people that have that same goal and drive to make things better.”

Most recently General Gabrielli was chosen to lead a task force to help execute Operation Allies Welcome. He says, “it was the best deployment I’ve done in my whole 33 years. It was the most fulfilling.” The task force was deployed to help facilitate the welcome and resettlement of over 7000 Afghan refugees over six months. This mission is an extension of Operation Allies Refuge, charged by the Biden Administration and Homeland Security to evacuate at-risk Afghan civilians and U.S. citizens.

One of several other locations, out in the New Mexico desert, in conjunction with Holloman Air Force Base, a “village” was erected in 10 days. A massive undertaking complete with infrastructure including, living quarters, dining centers, educations centers, basketball courts, and a cricket pitch. At no fault of the contractors, the size of the project and the timing of the first arrivals presented a major timely completion problem. General Gabrielli and his team pitched in to speed up construction. They established a 24/7 operation to assist in building the partitions for individual and family living quarters within the large tents. This was only the beginning of the marvel this operation provided.

The excitement and pride pours out of General Gabrielli when he talks about the service of his team, “we asked them to build deep trust with these folks and they did. Everyone had their own posse of kids. They were the true enablers of the mission.” The task force was a collection of individuals from all around the country, but had a leadership team that was Minnesota Air National Guard and female dominant. General Gabreilli’s leadership team included Chief Master Sergeant Amy Goossen, 1st Lieutenant Crystal Kirchner, and Colonel Meredith Seeley, who were hand picked by General Gabreilli for their “superstar capabilities” and the game changing power of diverse leadership they would provide.

There was no template or playbook to guide them, nor anyone who could say; they’ve been there and done that. It was under General Gabrielli’s “talent management” that his team established relationships and provided hospitality. “They were the ones in the village that kept the Afghans safe, happy, and entertained. It was not only to help them survive, but to thrive, and to provide care.”

It seems if you ask anyone who was a part of this mission what was truly special about their experience, they would say the children. “These kids are going to be the most resilient, most successful kids in America,” says General Gabrielli, “they were all fiercely independent, wicked smart, and positive.” Considering all the layers of trauma they’ve been through on top of resettlement, “I never saw a bummed out kid or a shy kid,” only confidence. General Gabrielli recounts the loyalty and enduring nature of all the Afghans, especially once they got to know them. “I’m in touch with so many of them now, around the country, keeping up with them and how they’re doing,” he says.

He also leveraged the help of Captain Saleha Jabeen, one of only five Mulsim Chaplains, and the only female. She was a champion of ensuring the success of the mission through her role in building trust and extending hospitality. Through General Gabrielli’s relationship with Representative Ilhan Omar, a statement of honor and gratitude was entered into the congressional record about Captain Jabeen, General Gabrielli, and everyone on their team for a job well done. Representative Omar said, “We are all fortunate to have had [Captain Jabeen] in this position, ensuring that we have lived up to our cherished values of hospitality and providing safe haven to those in need.”