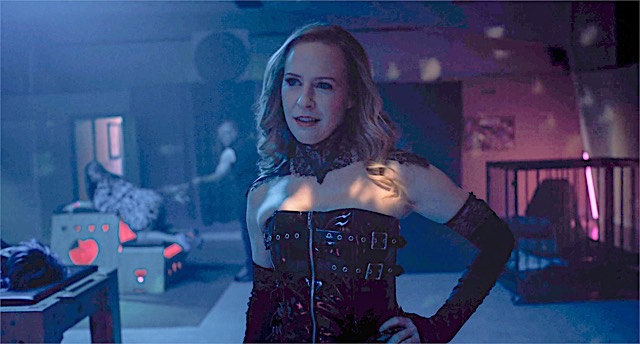 As the film starts, we meet Charlie, a divorced father with two teenagers—one of whom is using drugs. Charlie, a film professor, is starting a new teaching job at a conservative Christian college. Charlie is not terribly acquainted with this kind of Christianity but tries to fake it. Awkward moments ensue.

Charlie meets Lisa, who describes herself online as “Single Mom. Artist. Sexually Adventurous.” Lisa also has two teenagers, one of whom is non-binary and uses gender-neutral pronouns. The four teenagers are not thrilled when Charlie and Lisa decide to live together and blend their families. Personality frictions ensue.

The film treats other contemporary issues sensitively and respectfully, too. Example: The way the non-binary character is portrayed, and the way the other characters react to them, seems like a fair and accurate portrayal of today’s reality. The situations are sometimes awkward, and well-meaning people, sympathetic but clueless, can sometimes be unintentionally hurtful. But they learn. I thought there was good consciousness-raising here around this issue. Similarly, the character’s and family’s struggles with substance abuse are portrayed realistically and matter-of-factly, with both humorous and sad touches to the portrayal.

But some of the awkward situations that Charlie was put in—where he had to pretend to be something he was not, and where things threatened to blow up if he couldn’t be convincing—made me squirm. I actually had to stop the film’s playback more than once because I saw a train wreck coming and couldn’t bear to watch it right then. I enjoyed watching the dungeon scenes in the film, but I blanched at the conservative Christian attitudes on display.

Speaking of awkward: “They/Them/Us” was filmed during August, 2020, and was one of the first films approved for production during the COVID-19 pandemic by the Screen Actors Guild. Strict testing, social distancing, and cleaning and sanitizing requirements complicated the film’s production logistics. According to Sherman, “If we would have gotten even one positive case, we would have had to shut down production. It’s a miracle we didn’t. We were lucky.”

“They/Them/Us” had its premiere on Sept. 11, 2021, at the Dances With Films Festival in Los Angeles. To date, the film has won the “Best Low-Budget Feature Film” award at the Paris Independent Film Festival and the “Best Comedy” award at the San Diego International Film Festival. “They/Them/Us” is now widely available for viewing, rental or purchase, on many of the major streaming platforms. For more information, and to watch the film’s trailer, visit www.theythemusfilm.com. A final note: I had the chance to interview Sherman, Vogley Woods, and Barak and Sheba about the making of this film. You can read my interview with them on the Lavender Magazine website at