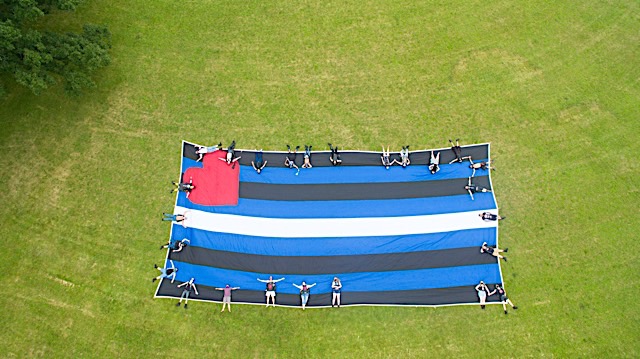 The 2020 version of the traditional community photo with the giant Leather Pride flag—this time, an aerial photo created using a drone. Photo by Larry Barthel.

The 2020 version of the traditional community photo with the giant Leather Pride flag—this time, an aerial photo created using a drone. Photo by Larry Barthel

1994: The first Leather Pride celebration I ever attended was a post-Pride-Parade gathering in the upstairs bar at the Gay 90s. 1994 also was the year of the first annual collectible Minnesota Leather Pride dog tag.

1995: The Pride Parade did not always follow its now-traditional route up Hennepin Ave. to Loring Park. The second installment of this Leather Life column noted that the “Meeting place for the Leather Contingent is on Willow between 14th St. and the Berger Fountain” on the eastern edge of Loring Park. The post-parade Leather Pride gathering was again at the Gay 90s and featured “entertainment, a bootblack, jail, body piercings, temporary tattoos, and haircuts by Vince, the Master Barber.”

1996: This year’s leather contingent in the Pride parade rode on a Leather Pride float with twin propane-fueled “Flames of Liberation,” a rainbow-flag display, leather club banners, and a motorcycle. The ride ended with a spectacular balloon-release finale.

1997: Because this year’s Pride Festival was held across the Mississippi River from downtown, the parade (and the leather contingent) marched down Hennepin Ave., crossed the river, and ended up at the festival grounds on Main Street.

1998 was a pivotal year. Leather Pride expanded to a 3-day celebration: a Friday night at The Town House in St. Paul; a Saturday-evening Sundown Supper at Minnesota Bar and Grill in the Cedar-Riverside area; and a Leather Pride Wind-Down Sunday evening at Tropix.

Also, 1998 was the year that the giant Rainbow and Leather Pride flags made their first appearances in the Pride Parade. For the first time, the leather contingent was toward the front of the parade in one group. By the time the parade reached the park the two huge flags had collected many pounds of change, thrown there by spectators along the parade route. I heard several people voicing the same thing I was feeling: “This was fun—let’s go back and do it again!”

2000: My most vivid memory of this year’s Leather Pride weekend festivities was getting my head shaved on Saturday evening by leather barber Vince on the patio of the Minneapolis Eagle.

2006: Educational events this year included a Leather Smorgasbord, an afternoon of workshops on humiliation, water sports and positions of submission, and a temporary piercing workshop the next day. This year’s Floggapalooza, held at The Saloon, introduced a new feature: Cane-o-rama. By 2006, thirteen organizations were sponsors for the annual Minnesota Leather Pride celebration.

2007: Events on the patio of the Minneapolis Eagle included a Leather/Fetish Smokeout ,cigar/pipe social, and a Dog and Pony Show (human division) where folks could meet the human animals and their trainers.

2008: This year’s Minnesota Leather Pride celebration listed twenty events. One of them was the first-ever Bondage Slam: a bondage showcase followed by a bondage contest, complete with judged events and prizes. The Leather Pride booth during the Pride Festival in Loring Park added a very popular leather art and photography gallery. And, in a stirring and memorable pre-parade ceremony, the giant Leather Pride flag from 1998 was decommissioned and a new giant Leather Pride flag was unfurled (Watch the ceremony at https://www.youtube.com/watch?v=yLF5-VFGC7A ).

2009: In another memorable pre-parade ceremony, the other giant flag from 1998, the Rainbow Pride flag, was decommissioned and a new giant Rainbow Pride flag was unfurled. Members of the leather/BDSM/fetish community participated in, and were instrumental in creating the ceremony.

And at the time, no one knew this would be the last Pride Parade for a while.

2020: And then, suddenly, it ended. Many beloved traditions, including the Pride Festival and Minnesota Leather Pride events, came to a screeching halt because of the worldwide coronavirus pandemic. However, a small group of folks were able to get together to continue the annual tradition of a community photo with the giant Leather Pride flag—this time with a drone, carrying a camera, flying above the flag and the socially distanced leather/BDSM/fetish community members.

2021: It has been announced that a scaled-back GLBTQ Pride Festival will be held July 17-18, 2021 (but again this year, no Pride parade). At this writing, details of possible Minnesota Leather Pride events (a Leather Pride booth at the Pride Festival? A Leather Pride flag photo shoot? Something else?) are still being determined. I hope my memories above of past Pride celebrations do not represent a vanished era. I hope both GLBTQ Pride and Leather Pride can continue in a form that fits the post-Covid era.