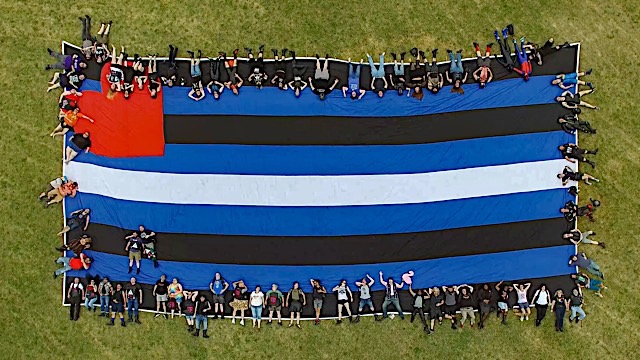 June 26, 2021: A photo from the 2021 community photo shoot with the giant Leather Pride flag. Photo by Larry Barthel

June 26, 2021: A photo from the 2021 community photo shoot with the giant Leather Pride flag. Photo by Larry Barthel

DeBlase’s idea for a Leather Pride flag was first presented to the community at the International Mr. Leather contest in Chicago on May 28, 1989. DeBlase intended the flag presented then as a “first draft,” a starting point on the way to a final flag design created by community consensus. He was surprised when the community accepted and adopted the flag as it was presented, with no alterations or modifications. The way the flag was presented in 1989 is pretty much the way the flag has been seen, and flown, ever since.

Spriestersbach originally asked Gscheidmeier about sewing a large rainbow flag to begin the Pride parade. Spriestersbach envisioned a large flag carried by one person. But Gscheidmeier proposed two giant flags—rainbow and Leather Pride—“curb-to-curb and a block long” to lead the parade.

That’s exactly what ended up being created. Spriestersbach provided the materials, and Gscheidmeier spent three and a half months sewing both flags. According to Gscheidmeier, both flags were about 75 feet long and 50 feet wide. That made Minnesota’s giant Leather Pride flag the largest such flag in existence.

The two giant flags were carried by community members at the beginning of every year’s Pride parade until 2008, when the original Leather Pride flag was decommissioned in an elaborate pre-parade ceremony.. That original giant Leather Pride flag was sent to the Leather Archives and Museum in Chicago, where it is now the largest single item in their collection.

At the end of each year’s Pride parade, a tradition has evolved: taking a photograph of the giant Leather Pride flag, spread out on a lawn and surrounded by the people who just carried it in the parade. Even though there were no Pride parades in 2020 or 2021, the tradition of the Leather Pride flag photo shoot has continued—and has even been enhanced by the use of an aerial drone to take the photograph.

Shown in this article is one of the photographs from the 2021 Leather Pride flag photo shoot coordinated by the Minnesota Leather Pride organization. The photograph was taken June 26, 2021, in Theodore Wirth Park in Minneapolis.

Here’s hoping Minnesota’s two giant Pride flags will be able to make an appearance at the beginning of a Pride parade in 2022. When you see them, remember that they are in the parade because of the inspiration and actions of two gay leathermen, and the flags’ continuing presence in the parade is also a testament to the Black Guard of Minneapolis.