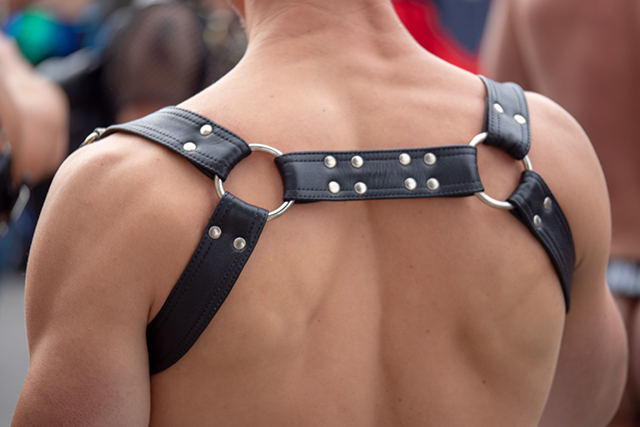 Because I recently wrote a column on “Leather and Aging” (Lavender issue #681), and because the theme of this issue of Lavender is “LGBTQ+ Under 40,” this column is an appreciation of members of the leather/BDSM/fetish community who are under the age of 40.

I am happy to report that young people are a large cohort of this community. It was not always safe to assume that this would be the case. This community grew and flourished originally because of mentorship, a passing down of information and culture from more experienced members to those who were less experienced—which usually, but not always, meant older to younger.

But the loss of most of a generation of leathermen during the AIDS epidemic in the 1980s and ’90s left the fabric of the community, and the chain of mentorship, severely torn. At one point I wrote a column about a question I had heard many community members asking: “Where will the new blood come from?” Fortunately, the “new blood” appeared and has kept on appearing year after year. And leather/BDSM/fetish culture has been growing and becoming ever more vibrant as a result.

Because of the influence of younger community members, the leather/BDSM/fetish community has become more open to differences and diversities. The community includes many more BIPOC members now. Leatherboys, leathergirls, transmen, transwoman, gender-fluid, nonbinary, asexual—as society has become more varied, so has the leather/BDSM/fetish community. Today’s younger community members are just as pioneering as my generation was when we were younger.

Today’s under-40 community members bring to the community an energy, a curiosity, a willingness to learn and do. They may be young, but they’re not necessarily novices. They’ve taught classes and workshops and have been on discussion panels; started clubs; entered leather contests, and won and held titles; served on committees; and helped to keep their community going. They have visions of what they want the community to be, and where they want the community to go, and they’re willing to work to turn those visions into realities.

It’s not all roses, of course. I read the Facebook posts of younger community members and see the problems they’re dealing with, both within the community and just in daily life. Of course the COVID pandemic has not made things easier. But, like us older folks, they keep going and are doing the best they can.

One of the great features of this community is that community members under 40 are willing to work and socialize with community members who are over 40. But, when one is young and kinky, there are times when it’s good to be able to hang out with others who are also young and kinky. Sometimes clubs form that just happen to have primarily younger people as members. But some groups have been formed specifically as comfortable spaces for younger kinky people. Many of these groups can be described as “TNG” (“The Next Generation”) groups.

According to Philip Wolf (also known as Boymeat), one of the four founders of the original TNG groups in 1999, a TNG group “is meant to serve the young, who have unique experiences and unique challenges as compared to those who are older.” But Wolf also notes that TNG groups also can “establish a gateway into the larger scene. Experience has shown that many young people enter the scene looking to find their peers. TNG is that space—to get them comfortable, to establish a network of friends and acquaintances, and eventually to see them comfortable enough to explore the larger scene.”

MinKY’s website describes the group and its members: “We are students. We are young professionals. We are building our families. We are still trying to find ourselves. We are here to teach and lead. We are Kinky! . . . We put on educational events, skill shares, play parties, munches, and other social outings. Above all, we want our members to have a safe place to have kinky, sexy, fun!”

Unfortunately, it appears that MinKY’s in-person events have been put on hold due to the COVID pandemic. MinKY still maintains a web presence at minnesotakinkyyouth.org and also has a presence on Fetlife.com.

Some longtime (usually meaning older) community members might express dismay at some of the changes being wrought by younger community members. But why should this community be any different than any other community? There comes a time when elders must turn the reins over to youth, and youth may not do things the same way that their elders did. Things change, and change is good if it means reinvigoration rather than stasis—or worse, decay.