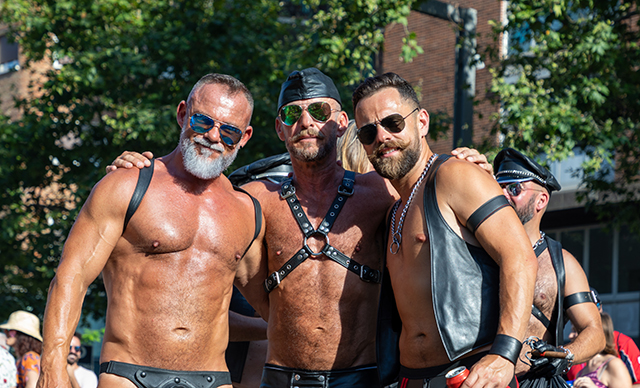 Let me begin this column with what some might consider a five-letter word that’s taboo: A-G-I-N-G. I’ve been thinking a fair amount about aging lately, especially as it relates to the leather/BDSM/fetish community.

I have written in this column about leather and aging before (in 2001, 2002, and 2007). But two things have prompted me to revisit the topic. One thing was a conversation I had with several other people at the last in-person leather event I attended in 2020. That was the Mr. Twin Cities Leather contest, the evening of Saturday, Feb. 15th. During conversation after that contest, several people were talking about starting a discussion group for leatherfolk of a certain age. “I’m interested,” I said, “please let me know when it gets going.” And then . . . well, we all know what happened next.

The other thing that has prompted me to think about leather and aging was Patrick Scully’s recent virtual show, “The 3rd Act,” presented by Illusion Theater. In this play Scully asks himself: “Can I embrace becoming old, particularly in this ageist society?” Both Scully’s play and the virtual audience discussion that followed were extremely interesting and thought-provoking. Scully talked about the play as something of a work in progress. If he presents it again, I highly recommend going to see it, whatever your age. (At this writing, a video of the virtual audience discussion is still available online at www.illusiontheater.org/the-3rd-act )

In some ways age is irrelevant in this community—or, at least, age is not as important as other qualities and aspects of peoples’ character. Young, old, and in-between are all respected and accommodated. One interesting thing about leather is that it decouples chronological age and age in the community, also known as experience. A person who might still be considered young chronologically, but who has been in the community for a long time, may mentor a newcomer who is chronologically older. And that’s no big deal—it’s just the way the community and the culture works.

I think elders are respected more in the leather community than in the general culture. We respect our elders for their stories, their wisdom, their experience, their history, and their perseverance. We seek out our more experienced members for discussion panels and for educational presentations on history, culture, and technique. Many younger members of the community truly understand that they have benefited from their elders’ efforts of blazing new trails. We leatherfolk might have something to teach the general culture about anti-ageism.

Here’s a concrete example of anti-ageism in the leather/BDSM/fetish community: I once attended a workshop on the subject of “geriatric dungeons.” First, the fact that “geriatric dungeons” were even being talked about lends credence to the fact that getting older does not have to mean giving up sexual activity or BDSM activity. Second, talking about “geriatric dungeons” is a mark of respect for older members of the community—the community values them enough to want to include them in dungeon play, and the community is willing to adapt dungeon spaces to make this possible. Third, one of the conclusions of the workshop was that creating dungeons that worked better for more mature players actually meant creating dungeons that worked better for everyone, of any age.

Another example of leather respect for maturity: The Knights of Leather, a Twin Cities- based leather club, hosts an annual run called Tournament. The run is held in a beautiful rustic setting. But some of us who once enjoyed “roughing it” by sleeping in rustic cabins are no longer able to do that.

The same respect for maturity is evident at leather contests. Every year, for example, the contestants at the International Mr. Leather and International Mr. Bootblack (IML/ IMBB) contests represent a wide range of ages. And I think it’s significant that both the first IML titleholder (David Kloss, IML 1979) and the first International Ms Leather titleholder (Judy Tallwing McCarthy, IMsL 1987) are still relevant and still respected. (I recently saw a virtual presentation by the Leather Archives & Museum in which Tallwing McCarthy shared reminiscences. It was fascinating!) And there are other examples of titleholders from many contests who have stayed involved and relevant in the leather/ BDSM/fetish community over many years.

For my final, and perhaps most personal, example of age being respected in leather, I need look no further than the former leather columnist for the Bay Area Reporter in San Francisco, the legendary Mr. Marcus. He started writing his leather column in 1971 and continued writing his column, and judging leather contests, for the next 38 years. He was still active and relevant when he died in 2009 at age 77.

Everyone is growing older—all the time. May we all, of whatever age, have the blessing of growing older and still staying relevant and respected.