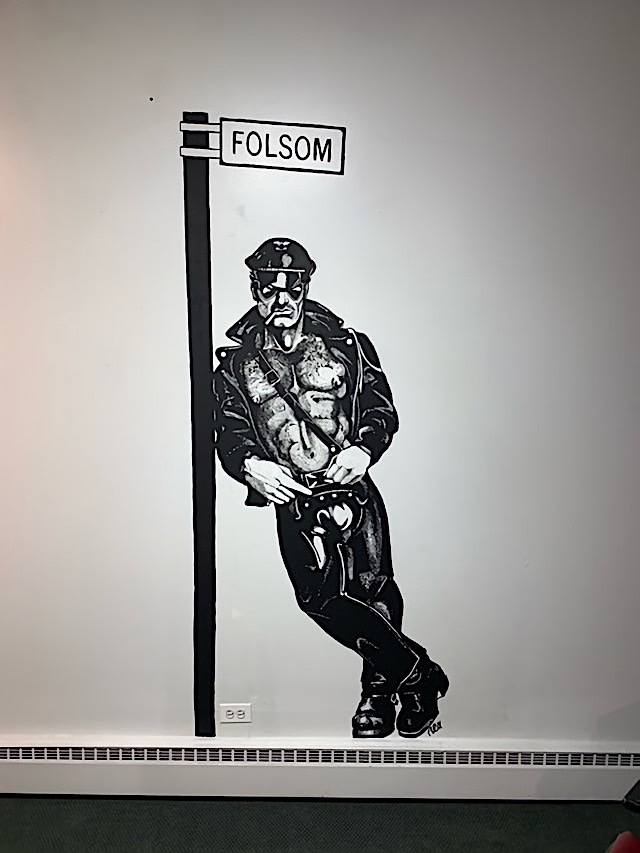 Artwork on display as part of the “Verboten: Works by Rex” exhibit at the Leather Archives and Museum, Chicago.

The doors to the Leather Archives and Museum (LA&M) in Chicago are again open to the public. (They had been closed for many months due to the COVID pandemic.) To celebrate the reopening, the LA&M is presenting two new exhibits in its galleries. One exhibit is devoted to fascinating and evocative historical leather club artifacts, while the other is devoted to the drawings of a pioneering, and still active, leather artist.

The larger exhibit, “The Golden Era: Leather, Levi and Motorcycle Clubs,” was curated by Leslie Anderson. The time period covered by the exhibit is described as “After Stonewall and before AIDS, 1969-1983.” During those years the gay leather scene, which had its beginnings among veterans returning from WWII, grew into a vibrant culture and community that flourished in Canada and Europe as well as in the United States.

An opening reception for the exhibit was held on July 15, 2021, as part of the LA&M’s final monthly virtual event called “Leather LapTop.” (In addition to being virtual, the July 15 “Leather LapTop” could also be attended in person at the Archives.) During the opening reception, curator Anderson took viewers on a brief walkthrough tour of the exhibit, showing some of its highlights.

The exhibit, lovingly and respectfully assembled, displays a wealth of artifacts from the exhibit’s time period. These artifacts vividly show the life and camaraderie between leather clubs of the time, and their members, from around the world. The artifacts include leather and denim vests with back patches; club colors, pins, and insignia; items related to early club runs and other social gatherings; photographs, letters and other documents; trophies and plaques; and even mugs and tankards.

A large quotation painted on the gallery wall (attributed to Norman Oppenheimer) describes the time period chronicled in the exhibit: “Our world was forever changed. We started that ride in the closet, but that night our closet opened to the wide world on the night Stonewall rioted.”

On a personal note: Had events in my own life gone differently, I might have been part of the “Golden Era” community depicted in this exhibit. The Atons were a relatively new leather club when I came out as gay. (The Atons of Minneapolis leather club was founded in 1972, and hence will be celebrating their 50th anniversary next year, in 2022.) Had I discovered, and connected with, the Atons when I first came out—instead of connecting with them almost 20 years later—I would have experienced firsthand the milieu shown in this “Golden Era” exhibit.

However, had I done so, I might not be alive now to tell the story. During the virtual walkthrough of the exhibit on its opening night, curator Anderson pointed to a photograph of a group of attendees at an early leather run. She then said that, based on statistics of AIDS survival, probably less then 25% of the people shown in that photograph would have survived the AIDS epidemic. More than 75% of the men in that photograph would have been among the many casualties of AIDS.

The second new exhibit, “Verboten: Works by Rex,” is being presented in the LA&M’s Dungeon Gallery and has been curated by Joseph S. Garber. This exhibit is an excellent complement to the “Golden Era” exhibit, because Rex’s early imagery would have been seen and appreciated by the men documented in “The Golden Era.”

Rex’s drawings are explicitly and intensely homoerotic. They celebrate leather, fetish, raunch, and man-on-man sex. Many of them, including images created for the legendary Mineshaft bar in New York and for A Taste of Leather, a leather retailer in San Francisco, have become iconic images in the gay male leather community. Rex’s work was inspired by the images of Tom of Finland—although Rex has his own style—and Rex went on to inspire the images of Robert Mapplethorpe.

While many of the iconic early gay/leather/fetish artists are no longer with us, Rex is still active and maintains his own artist’s website at www.rexwerk.com.