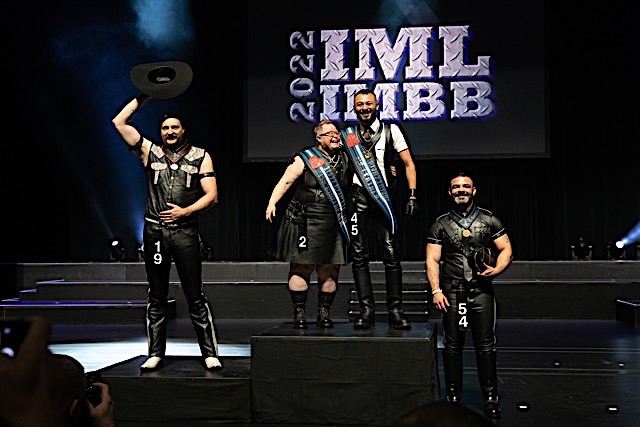 After being canceled two years, the International Mr. Leather (IML) and International Mr. Bootblack (IMBB) contests were back in 2022. This year’s IML (44th edition) and IMBB (30th-anniversary edition) contest weekend event was held in Chicago, as always, May 26-30, 2022.

However, although IML and IMBB were back, I was not back with them. Because of COVID risks, 2022 was the first time I have missed an IML/IMBB contest weekend since I started attending in 1994.

Experiencing the weekend vicariously is a lot easier today than it would have been in 1994. There was a live text feed of the contest on Twitter, and there were many posts by many people on Facebook.

Another way of experiencing the weekend vicariously is to talk to people who actually were there. I talked to our two IML contestants from the Twin Cities: Ash “Dragon Pup,” Mr. Twin Cities Leather 2020-2021, and Allan Dahl, Mr. Northwoods Leather 2019-2020. I also spoke with Andrew Bertke, who has been taking pictures at IML/IMBB for several years and who this year was one of two official IML staff photographers.

This year there were 60 contestants for IML and three contestants for IMBB. Both contests were truly international. IML welcomed 12 contestants from outside the USA, including nine from European countries such as Austria, Belgium, France, Germany, Norway, and Spain; two contestants from South America (Colombia and Venezuela); and one contestant from Australia. One of the three IMBB contestants was from Europe. Dahl noted that this was an unusual year for the IML contestants: “We were in a peculiar situation, compared to other IML classes, in that we had a couple extra years to get to know each other.”

The host hotel for the weekend was the Congress Plaza, as it has been since 2015. According to Dahl, “I loved staying at the Congress. For as old as it is, I couldn’t imagine being anywhere else.” Many activities for the contestants, including orientation, interviews and daily meetings, were held on the third floor of the hotel. Bertke thought the energy at the hotel, and at the weekend in general, was good: “I think a lot of people were just happy to be there and see each other. It felt a lot like old home week. So many of us have not seen each other for three years.”

For the contestants, the first event was the contestant orientation on Thursday. Dahl said, “The welcome was fabulous. The staff was absolutely wonderful and very, very supportive.”

The first judging event for the contestants was the private interview with the weekend’s nine judges. Ash reported that he received “no curveball questions,” and that one of the judges asked him about his military service. Dahl said he approached the interview “like it was a conversation with the judges. That seemed to work for me.”

A series of four Kink U educational sessions were presented Saturday afternoon. One of these sessions proved to be controversial: “Vaginal Sex for Gay Men,” which was taught by Boy Madura Onyx, a transgender man. Unfortunately, this class caused some transphobic responses on social media. The IML organization later posted on Twitter a statement of support and inclusivity which read, in part, “It is our firm belief that Trans men are men and therefore are afforded the same rights and privileges of cisgender men who come thru our doors.”

The venue for the Saturday and Sunday night contest events was new this year: the Arie Crown Theater at McCormick Place. Bertke thought the theater was “beautiful, with great dressing rooms and area for the contestants right off the stage. There wasn’t a maze of pathways to get from the dressing rooms up to the stage like there have been other years. That was really good for the contestants.” Bertke also told me he liked the look and production values of this year’s contest staging. And, as in recent years, the emcee for the IML/IMBB weekend’s events was Thib Guicherd-Callin who, according to Bertke, “did a great job as usual.”

The goal for contestants at Saturday evening’s physique prejudging (“Pecs & Personality”) was to be as sexy and witty as possible while wearing as little as possible. Bertke said he “thought all the contestants presented themselves really well. There was a lot of personality on that stage.” Dahl said, “I felt really comfortable with who I was and what I represented myself as. I think the audience was great. There was a lot of cheering, and they were very supportive of all of us.” Ash said, “I made them (the audience) laugh, so I was happy.”

Each year at Pecs & Personality the contestants are given the opportunity to answer one question. But this year, for the first time, the contestants knew what their question would be before they appeared on stage. According to Dahl, “There was a huge sigh of relief for most of the contestants. A lot of folks had issues with how they were going to answer an impromptu question onstage—it was really nerve-wracking.” Bertke also thought this change was better for the audience: “It gave the contestants time to prepare beforehand so the audience got more entertaining answers from the contestants.”

The weekend’s high point was the Sunday evening contest and show. Dahl explained to me that on Sunday afternoon the contestants were bused to the theater, where they went through a rehearsal of the show and then enjoyed a catered dinner before they went onstage for the contest and show. Ash told me he thought that preparing for the contest on Sunday was “both exciting and sad at the same time, because this group of people that you’ve been with for so long was about to dissipate. Especially for us, being two or three years together with these people.”

The new International Mr. Bootblack 2022 was the first winner to be announced during the evening: Alistair LeatherHiraeth, Bootblack Europe 2020. Then, at the climax of the show, this year’s new IML titleholders were announced. The second runner-up was David Spivey, Mr. Mid-Atlantic Leather 2020-2021, while the first runner-up was Duke, Mr. Mid-Atlantic Leather 2022. (This is the first time in IML history that the first and second runners-up have held the same leather title from different years.) Finally, the new International Mr. Leather 2022 was announced: Gael Leung Chong Wo, Mister Leather Belgium 2020-2021, the first-ever IML titleholder from Belgium.

Dahl summed up his time at IML by saying, “I think the best part of the whole experience was actually meeting people. I don’t think it was so important that you win or you lose, because it was put to us that we were all winners because of what we went through to get there. The number of folks that have entered the IML medallion brotherhood is not that high, so it’s quite an honor to be included in the number of brothers that have experienced IML. It’s an experience like none other, and I’ll remember it forever.”

Ash continued, “IML continually supports the contestants and who they are—which I think is amazing. They see the change, and they are willing to grow and be with the change. Otherwise, I wouldn’t have been on that stage as a trans-masculine person. Watching them (the IML and IMBB contests) grow and change with the times keeps me hopeful that more of our clubs and more of our contests do the same thing.”