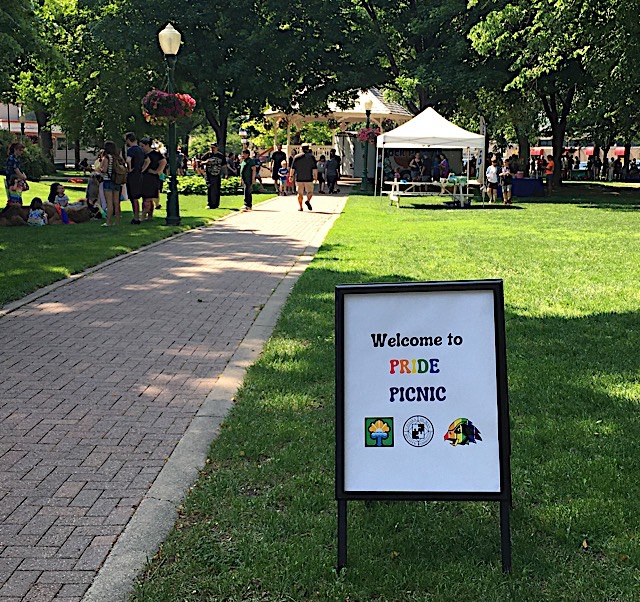 The welcome sign at the entrance to the Chaska Pride Picnic in City Square Park. Photo courtesy of Steve Lenius

Pride celebrations are increasingly happening in smaller cities and towns. They no longer are held only in big cities and major metropolitan areas. Lately, Lavender Magazine has done a good job of covering these smaller pride celebrations. And I was pleasantly amazed recently when I experienced a Pride Picnic in Chaska, Minnesota—my former hometown. The fact that I just happened upon this Pride Picnic made it an even sweeter surprise.

Chaska’s Pride Picnic, which promised a chance to “Celebrate Pride Month with food, fun and friends!”, was held in City Square Park on June 12, 2022. It was a gorgeous Sunday afternoon—bright sunshine and a pleasant breeze filtered through the canopy of the park’s majestic trees. The picnic was put together by the Chaska Parks and Recreation department, with support from the Chaska Human Rights Commission and Chaska High School Gender and Sexuality Alliance Club. A spokesperson for Chaska Parks and Recreation told me that the Pride Picnic is in line with the department’s goal of providing inclusive events at low or no cost. (This was actually Chaska’s second Pride Picnic; the first was in 2021.)

I was completely unaware that the Pride Picnic was going on. I had traveled to Chaska for an outdoor visit with my father, who is a resident at Auburn Manor, a senior living facility in Chaska. Auburn Manor is just two blocks away from Chaska Moravian Church, which was the last congregation my father served as pastor. City Square Park, where the Pride Picnic was held, is directly across the street from Chaska Moravian Church.

After I finished my visit with my father, I was driving past the church on my way home when I noticed rainbow garlands at the edge of the park. Driving a little further, I saw a sign that said, “Welcome to PRIDE PICNIC.”

A Pride Picnic? In Chaska? Wow, I thought, I should stop and check this out. So, I did. What I saw made for a very unexpected and pleasant surprise.

The air at the picnic was festive. There were several community art projects, including the opportunity to make a bracelet or necklace with rainbow beads. A long table held a long sheet of white paper on which people were drawing or writing with brightly colored markers. People at another table were coloring pictures of butterflies. Other parts of the park were devoted to lawn games, face painting, henna tattoos, a tie-dye station, and even two live rainbow-festooned Pride Llamas. A rainbow banner on the historic gazebo in the center of the park proclaimed, “LOVE is LOVE,” while a DJ in the gazebo played pride-celebration dance music and people decorated the brick plaza around the gazebo using colorful sidewalk chalk.

One of the most popular parts of the picnic was the ice cream social sponsored by Chaska Parks & Recreation. Of the three flavors of ice cream on offer, I chose the “Superman” ice cream (blue, red and yellow, the colors of Superman’s outfit) and decorated it with rainbow sprinkles. Also available was a food truck selling Greek and Egyptian fare.

The afternoon had one solemn moment: At one point the music was interrupted by a student member of the Chaska High School Gender and Sexuality Alliance Club, who reminded attendees that six years ago that very day, on June 12, 2016, a mass shooting happened at Pulse, a gay nightclub in Orlando, Fla. The student called for a 49-second period of silence in memory of the 49 people who were killed in that mass shooting.

Wandering around the park, around which I had wandered so often in past years, I saw a diverse mix of people enjoying the picnic. I saw young people in rainbow, bisexual, or transgender capes; I saw single- or double-parent families with children; and I saw a few people my own age. I even ran into some colleagues from Lavender Magazine: Ellen Krug, the “Skirting the Issues” columnist, and Randy Stern, the magazine’s editor as well as its “Ride Review” columnist.

You may have guessed by now that having a Pride Picnic in Chaska—hosted by the city, no less—was a big deal for me. I spent most of my teenage years in Chaska. I even, for a brief period, lived in the Chaska Moravian Church parsonage, which was next to the church and directly across the street from the park where the Pride Picnic was held.

I graduated from Chaska High School after having been a student in Chaska schools starting in the middle of sixth grade. In those years Chaska High School did not yet have a Gender and Sexuality Alliance Club. That did not mean, however, that there were no gay students, as I found out many years later. Offhand I can think of at least eight people I went to school with whom I later discovered to be gay, lesbian, or queer. But at that time none of us talked about it. Some of us may not even have been aware of it.

During my years in Chaska I was not out as gay, even to myself. (Of course, I suppose there were other people who could see my secret, even if I couldn’t.) I never dated during high school, and on some level I knew I was attracted to men. But I thought my attraction to men was—yes!—“a phase.” I simply had not yet met “the right girl.” I would graduate from high school, go to college, find “the right girl,” get married and settle down, raise a family, and so on.

Of course, that’s not what happened.

Moral of this story: We are everywhere. Even in Chaska.