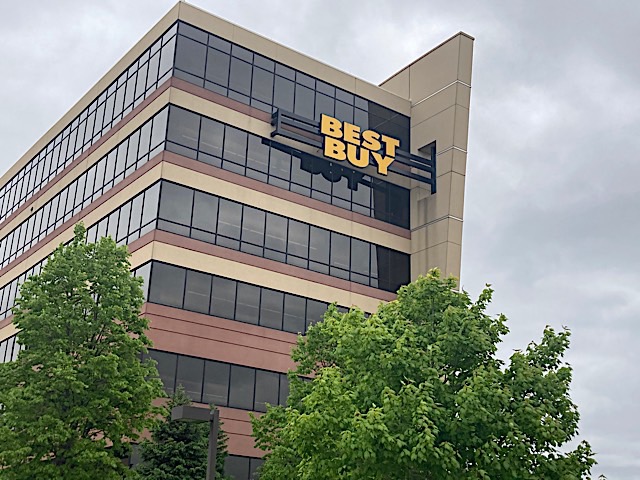 Although it would become many things before its history was written–a recruiting station, a conscript clearing house, and a war supply center, among others—Fort Snelling began as a place to facilitate commerce with the then-British-dealing Dakota and the Ojibwe tribes.  That origin and that subsequent flexibility of purpose are facets Fort Snelling shares with its fellow Richfield-based institution, Best Buy.  Originally founded in 1966 as an audio specialty store called (with apologies to Julie Andrews) Sound of Music, Best Buy eventually added video to its company palette, bequeathing itself its current name in 1983…just two years after Miss Richfield got hers.

In the subsequent decades, Best Buy has earned a reputation as a fine place to trade work for wage.  One particularly Lavender-centric aspect of this reputation is Best Buy’s many-times-consecutive 100% score on the corporate equality index of the Human Rights Campaign, the criteria of which are:  nondiscrimination workplace protections for sexual orientation and gender identity; parity between same and different-sex spousal and partner benefits; transgender-inclusive health care coverage; support for an inclusive culture; public engagement with the LGBTQ community; and a company’s overall corporate social responsibility.

No doubt that a big part of this annual perfection is Best Buy’s before-it-was-cool formation of its Pride Employee Resource Group, one of many voluntary, employee-led subsets whose aim is to foster a diverse, inclusive workplace aligned with the organization they serve.  Best Buy’s Pride Employee Resource Group is run by and designed for the organization’s many LGBTQ employees.

“At Best Buy, we aim to create an inclusive culture where everyone feels welcome and accepted, and not just during Pride Month in June,” a recent press release declares.  “It’s a year-round commitment.”  The Pride Employee Resource Group also catalyzes queer employee recruitment, hiring, and retention by outlining a work environment that’s safe, safety being a condition that markedly improves employee productivity by, like, a zillion percent, according to everybody.

This unsentimental allyhood is part of Best Buy’s larger effort to create a culture of broad demographic acceptance.  “At my core, I believe our people are the secret to our success,” Best Buy head honcho Corie Barry says, as quoted on the company website.  “It is my responsibility as CEO to unleash their power by nurturing a diverse and inclusive environment, one in which employees can bring their whole selves–their best selves–to work each day.”  This approach has caused Best Buy to cast a corporate light on Asian American and Pacific Islander History, Black History, Women’s History, and Latinx Heritage, in addition to LGBTQ Pride.

Thusly has Best Buy earned its Lavender Magazine Community Pride Award for Business.  Like its elder Richfield sibling, Fort Snelling, Best Buy’s primary purpose, commerce, will depend on its flexibility, and that flexibility will live or die with its policy of putting people before profits.  As the company itself proudly declares, “We have a motto at Best Buy:  you can be yourself.”

Therefore, we congratulate Best Buy on being named to this year’s Lavender Magazine Community Awards in the Corporation category.