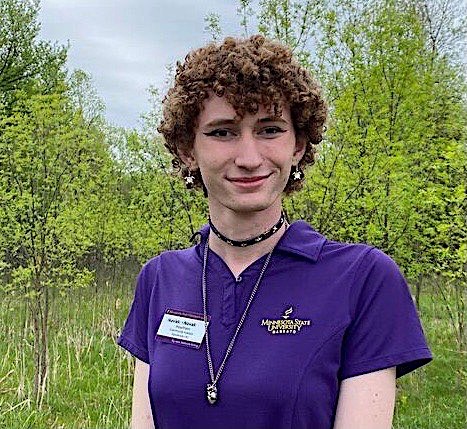 Storm Novak is everywhere in the Mankato community–from Minnesota State University, Mankato dorms to the state legislature–and she’s not even out of college yet. On campus, she’s a Student Government Speaker, PR and Marketing Coordinator, and facilitator, as well as a Community Advisor for residence halls, and off-campus, she’s a delegate to the local DFL unit, volunteer in the local community, and she even earned the Jessica Flatequal Rainbow award for her consistent work with MSU Mankato’s LGBT Center.

“I am somebody who really wants to have a lot of experiences. I want to get the most out of life that I possibly can,” says Storm of her many titles she’s accumulated all before going into her Senior year, “I recognize that I’m somebody who comes from a place of privilege, where I have a lot of free and available time to do a lot of stuff. And I want to use that time to try to make the world better for my fellow human beings.”

Playing the supportive role is, conversely, what makes a person like Storm stand out in the community. Her previous work on campus as a Student Senator has seen positive, more equitable changes to college life, like distributing free menstrual products to campus bathrooms, and this year, she resigned from her previous role in order to serve as Speaker–a leadership role that allows Storm to support and champion her colleagues efforts at making change. And in her recent work as a DFL delegate, Storm fills a major gap in an area where political involvement is a less than crowded (and often demographically older) arena. “I’m almost always the youngest person in the room,” Storm mentions with a smile.

At the MSU Mankato LGBT Center, Storm has been a consistent volunteer in her free time, most notably serving as a “peer panelist”–a role wherein Storm and several other volunteers appear on-location or via Zoom in classrooms and community spaces to share their experiences as members of the LGBTQ+ community. The 2022 Jessica Flatequal Award (named after the late, beloved former LGBT Center Director) was awarded to Storm for her volunteer work, in addition to consistently bringing Diversity, Equity, and Inclusion initiatives to campus life.

Beyond the desire to try new experience and see new things (in many ways–Storm is an Aviation major and cherishes the freedom of travel and perspective that comes with piloting aircraft), Storms activism stems from her upbringing and her own journey into confidence and self-expression: “I grew up in a small town that was not very accepting and cool and welcoming . . . I always felt very alone and not supported . . . Upon getting to the point where I feel like I’m very confident in who I am . . . I want to pay it forward and try to help out as much as possible.” With the world in front of her, it’s clear that no matter where Storm lands, real, positive change is sure to follow.

It is great honor that we add Storm Novak’s name to Lavender Magazine’s LGBTQ Under 40 list for 2022.