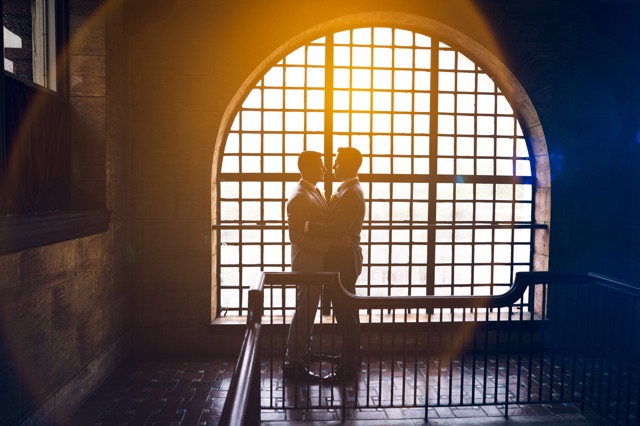 Like most modern-day love stories, Kyle and Jeremy found each other the way most couples in the 21st century do – through a dating app. After several years of dating, Jeremy decided to pop the question while on vacation in The Bahamas with friends; an excellent start to a beautiful life together. The couple tied the knot in St. Augustine, Florida at The Treasury on the Plaza, a popular wedding venue converted from a historic bank. With a grand entrance that included both fog and cold sparks, a mouthwatering three-tiered cake made up of chocolate, pistachio, and dulce de leche, and even a crowd-surfing session, this destination wedding located in the heart of the Ancient City was the best party the couple has ever thrown! 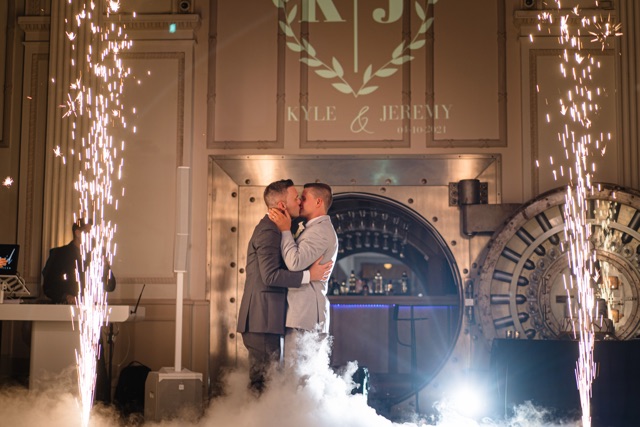 Kyle and Jeremy Grand Entrance at The Treasury. Photgrahpy by Rob Futrell

Kyle is originally from Jacksonville, Florida and Jeremy is from Griffin, Georgia. They chose St. Augustine, Florida because they knew it was the perfect place for family and friends to come together, while also providing them with all they wanted from their dream venue. “St. Augustine was the most beautiful location without being too far for those traveling,” explained Kyle. “We chose The Treasury because of its beautifully modern and elegant design.”

Kyle and Jeremy knew they wanted their big day to be as family and friend-focused as possible. “We really wanted our loved ones to be a part of it,” said Kyle. “We had large wedding parties made up of friends from all walks of life, and we each had our sibling as our best person. Our aunts sang during the ceremony, and my dad even officiated the wedding.”

Choosing Kyle’s dad, Raoul, as the one who would wed the two was a decision that came easy. “We both wanted someone we knew personally to officiate us,” Kyle said. “My dad has been a role model throughout our entire relationship, and he knows us better than anyone, so he was able to make the ceremony personal in a way that no one else would’ve been able to do.” Raul, who officiated, walked down the aisle with his own husband holding hands before marrying Kyle and Jeremy. 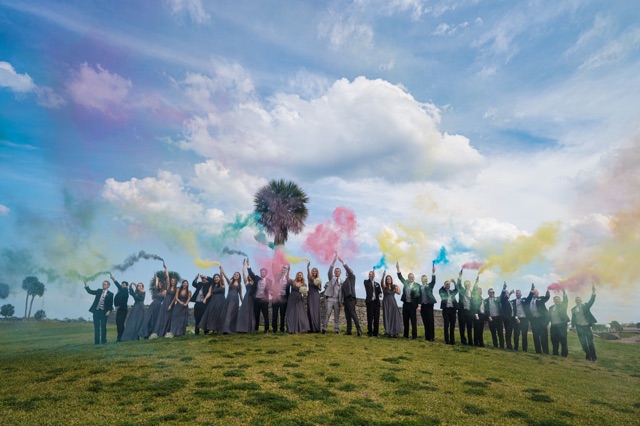 Kyle and Jeremy wanted to ensure that their wedding day included specially-crafted details that the couple would remember forever. “We wanted a moment to commemorate the LGBTQ aspect of our wedding,” Kyle explained. “So, we stood in front of the Castillo de San Marcos [National Monument] during the photoshoot and set off vibrantly-colored smoke bombs to create a Pride rainbow. The result was everything we could have wanted.”

Kyle and Jeremy also partook in new traditions such as the pouring of Unity Glass. The couple ordered glass pieces in various colors representing their birthstones and combined them during the ceremony. Afterwards, they melted them down and molded them into one piece of glass as a symbol of their union.

“Everyone at The Treasury was so incredible and helpful to work with,” said Kyle. “Everything was executed exactly to our vision and felt incredibly natural. It almost didn’t feel like we were throwing a wedding because it all flowed so smoothly. Overall, the day was a combination of overwhelming beauty and emotion. People were crying, but it was also the best party we had ever been to. I don’t think we could have achieved the perfect balance at any other venue in St. Augustine.” 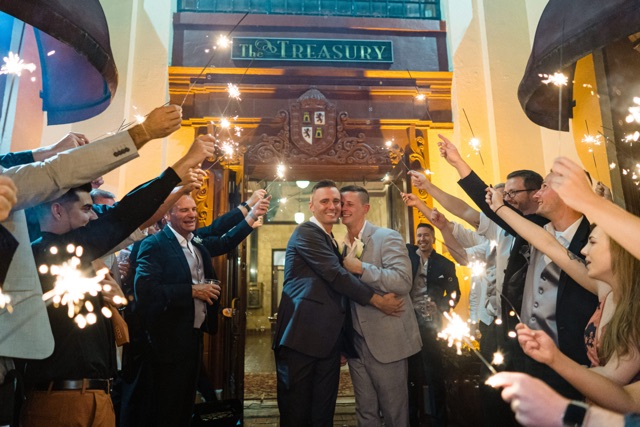 Now, the couple bids farewell to the Sunshine State as they embark to Boston, Massachusetts, where Kyle recently started as an Anesthesiology Resident Physician at Massachusetts General Hospital, the largest teaching hospital of Harvard Medical School. However, they’ll always look back on the Ancient City and The Treasury as where their life together truly began. 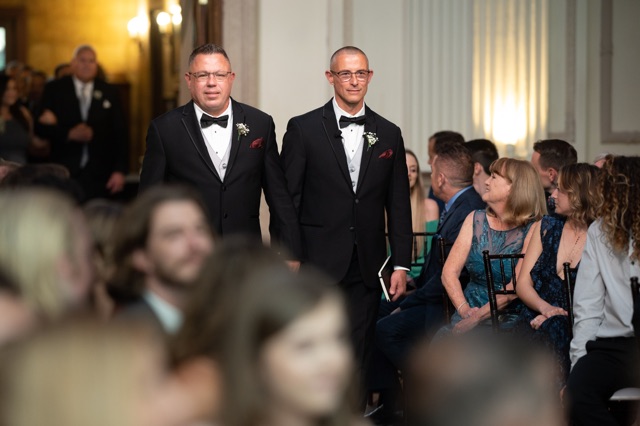