Just Break Up: Unsolicited Relationship Advice for the Masses 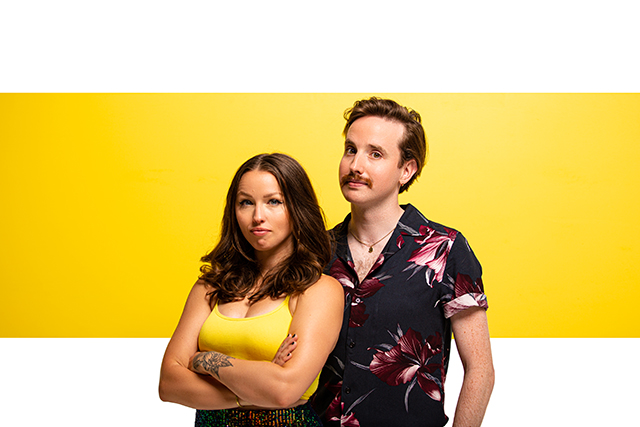 Now in its third year, Just Break Up, a “podcast about love, heartbreak, and all the relationship advice you don’t want to hear,” is the brainchild of hosts Sam Blackwell and Sierra DeMulder, along with producer, editor and composter Spencer Wirth-Davis. Blackwell and DeMulder are self-proclaimed nonprofessional amateurs, making it self-effacingly clear from the jump that they have, “no idea what they’re talking about.” And yet, thousands flock to their podcast every Monday to glean their deeply perceptive insights into how to navigate love’s brambly terrain. The duo work in tandem, bouncing and rifting off each other’s deceptively sharp observations and analyses, all while poking fun at themselves and the absurdity of human circumstance.

It’s a funny podcast, sure, and the chemistry between the impossibly charming hosts is visceral, undeniable, immediately familiar. But beneath all the histrionic modesty and comedic jabs there is worthwhile and solid advice: it’s clear that Blackwell and DeMulder care deeply about their listeners. Just Break Up is as much a comedy podcast as it is a self-help guide, and one filled with undeniable heart.

Tell me a little bit about yourself: education, interests growing up?

Sam Blackwell: I grew up in Southeastern Wisconsin in a town halfway between Milwaukee and Madison. When I was younger, I was super into theater stuff. I was in all of the high school plays, I also was in lots of different clubs; definitely an overachiever. I started the GSA at my high school. So I’ve always had a sort of political bent. I came up to the Cities to go to the U and studied English there. While I was at the U, I started working at a coffee shop called Espresso Exposé, which is no longer there—it’s now a giant Caribou Coffee in a giant department building. It’s like 15, 20 stories tall, which is where I met Sierra.

We quickly became friends by honestly smoking cigarettes in the back of the coffee shop. I’ll never forget Sierra. I was like sort of seeing this guy who went to China who was stringing me along. He sent me this letter and I was so emotional about it. Sierra read it and she was like, I hate this guy. [Laughs]

Sierra DeMulder: [Laughs] I don’t remember that. Oh my God, that’s so funny.

SB: I was like, this is the tough love that I need. I need someone in my life who’s going to read that and be like, No, Sam. This guy’s a joke. What are you doing?

Sierra, how about you?

SD: I grew up in a tiny town in central New York where the graduating class was three neighboring towns combined, maybe 60 people or less. I moved to Minneapolis sort of on a whim after I’d had my heart broken by my now-wife. So I moved to Minneapolis because I had some connections here through spoken word poetry—I was doing slam poetry when I was younger and I was really obsessed with it. I had a very strange 20s, but they were a lot of fun. I think I’ve always just been drawn to creativity, writing and humanity. Eventually I finished my degree at the U when I was 27, because I wanted to potentially go and teach creative writing at a college or university.

I read that you two bonded over morbidly sad literature. Can you give me like a few titles?

SD: The first time I realized Sam and I were like deeply compatible friends was when I was working and Sam came in to have a coffee and I realized he was reading Extremely Loud and Incredibly Close. I haven’t read the book in a decade, but it was very moving at the time. Sam came up to the counter and was like, “I love that book” with tears in his eyes. We were like crying over the book.

SD: [Laughs] Yeah. And then what’s the name of the other book that I, like, warned was going to change your life, but not in a good way?

SD: That book should have a trigger warning.

SB: I think that’s part of the reason why we love this podcast too, is that we find so much connection in writing and having people write us letters every week to pour out their soul. Some of them are so beautifully written, they’re like literature. It’s so rewarding. It makes sense to me that this is where we found ourselves.

What were the beginning stages that led up to the podcast?

SD: I was having a really hard year and I was really questioning my career as a writer. I felt like my soul was screaming for peace. It was screaming for love and not romantic love. Like it just wanted to feel good. I had spent several years in this bad relationship and before that, in another toxic relationship. I don’t mean to sound dramatic, but I just wasn’t feeding myself emotionally at all even though I was doing creative writing work.

Backing up a couple of months: randomly at a patio, some coworkers and I were giving each other relationship advice. I had made the crack that like, What if this was a podcast?  So I came to Minneapolis and said very casually to Sam, Do you want to do this project with me?

SB: She approached me and I was like I absolutely want to do this. So much of our relationship was about getting together and talking about our lives and love. That’s what we did was just talk about really intense relationship stuff.

SD: We shared the most with each other for some reason.

SB: I was like, If we get a hundred listeners, it’ll be fine. Little did I know that we would have three million downloads on Spotify within three years. It was really not what I was expecting. It’s been a real trip to realize how many people out there are craving the same type of conversation, craving getting into the nitty-gritty. And we’re creating space to help foster that.

How did you two become such “non-experts.”

SB: I think a lot of it is the fact that I’ve been in therapy for 13 years of my life and learned a lot from really wonderful therapists. I think that also, I just have had an interest in relationships for a really long time. So taking perspective of my lived experience, as well as the therapy and practicing a lot of self-reflection and a lot of turning inward has been helpful. Then there are tons of self-help books that Sierra and I have both read. It’s sort of like an amalgamation of all of these different things that we have had the benefit of having access to.

SD: We’re also good public speakers. I think that that is another gift to the table: the conversation, because I don’t think we have different tools than other people have, but I am an experienced public speaker and so is Sam. Similarly to Sam, I was always in relationships and always interested in human relationships.

What is the process of answering a question?

SB: I go through and pick ones that are sort of yeses or maybes, or more like this is kind of interesting, I don’t know if we could answer this. I’ll say that in terms of the criteria, I’m trying to find diverse experiences and diverse voices as well. It’s also sort of like me just trying to connect with the letter itself.

SD: We get so many letters at this point that there is a letting go that we have to do as two tenderhearted, compassionate people. In the beginning we relished every pile, and like really picked out so many episodes from each pile, but then it got backed up to where we were answering letters from four, six months ago, and then they’re not applicable to these people’s lives anymore.

What relationship advice would you offer each other?

SD: It’s hard because I know you so intimately. Yeah. I would say you’re not responsible for your partner’s feelings.

SB: That’s a good one. My advice to you would be to say, you’re going to have to do a lot of awful shit before she leaves you.

Do you see Just Break Up ever becoming a book or broadcasting on YouTube?

SD: Those are literally our two goals.

That’s so exciting. Any others?

SB: Sierra said I have a secret goal to change the world. Because my philosophy is that this work of becoming more wholehearted people is going to be done relationship-by- relationship. If we can change the way we interact with other people and the ways in which we value ourselves and others’ unique experiences then I think that we have such a wonderful future ahead of us. It’s like, I want to take over the world in a really positive way.

SD: My hope is that people, like little Sierra, have maybe 1.5 less abusive relationships. We can’t prevent our listeners from struggle and suffering, but I think our hope is that we make us be more compassionate to ourselves.