It’s A Dog’s Life At Dogtopia 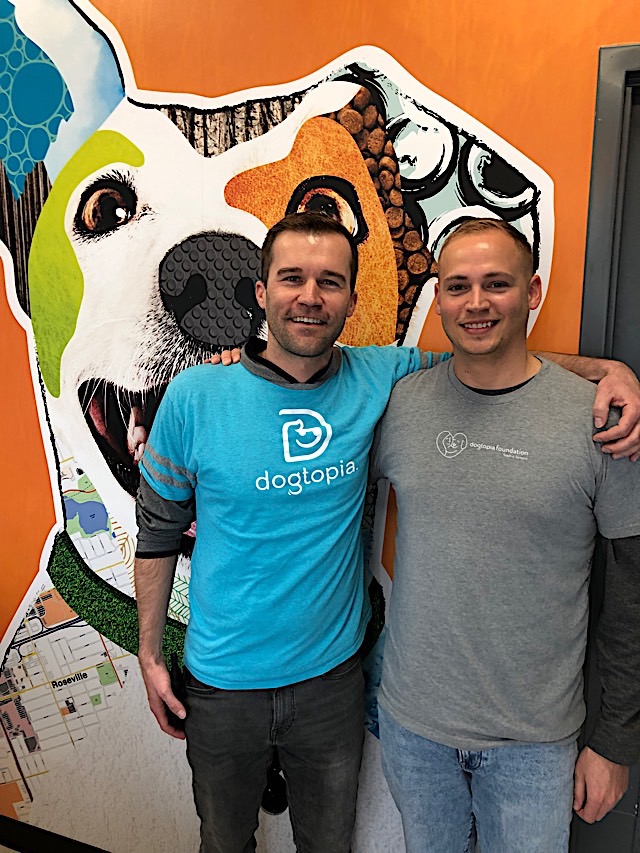 Dogtopia is a daycare, spa, and boarding service company for dogs that began in Arizona and has expanded to nearly two hundred locations nationwide and in Canada. Last year, Eric Hipp and Eric Nancekivell opened Dogtopia of Roseville, one of several locations in the Twin Cities Area. They graciously led us on a tour of their new facility and shared how they’re giving back to their community.

“We’re a Tinder success story,” Nancekivell says with an easy laugh when we sat down to talk. The two met in Colorado; Hipp had served in the Marine Corps and gone to CSU in Fort Collins while Nancekivell went to school in Boulder. A shared love of dogs and entrepreneurial spirit meant that their first home together was often filled with dogs they took care of through a dog sitting app called Rover. After learning about Dogtopia, they flew out to Arizona to discuss opening a new location, and decided to move home to the Midwest and try their luck in the Twin Cities Area with their nine-year-old mini Husky, Greyson.

The bright and clean facility is tucked away just off the exit in Roseville. Each dog has its own care folder and collar – here, everything is done for their benefit, whether it’s a special diet or gentle behavior correction. “We have seen really shy, timid dogs that are completely overwhelmed by this kind of environment do really well here after a week,” Nancekivell says. “They come in, they get used to it, their collar gets switched out, and they kind of know mom and dad are coming back at the end of the day.” While they do offer a great boarding service, the focus is the regularity of the daycare. “We love seeing all those puppies come in and grow. We take graduation pictures when they graduate to Romper – Romper is gonna be that one to three years old [room] – and then once they start to calm down, that’s gonna be that gym room. So it is this life cycle that we’ve kind of got here, it’s like dog school or camp.”

Romper and the gym room are two of three separate rooms at Dogtopia, each organized by age, so every dog regardless of size and age is able to experience safe play and interaction with other dogs. There are crates available as well, for dogs that are more comfortable in their own space while they learn to socialize. Whiteboards are in each room for staff to communicate across shifts, similar to a patient’s whiteboard in a hospital room, and mounted TVs rotate photos and names of each dog currently in the room. Each staff member goes through extensive and ongoing training from safety protocol to dog body language, and there is a whole doggie spa room in the back where pups can get their nails trimmed or have a thorough bath. A peek into the food preparation area shows a staff member happily preparing a healthy, peanut butter protein snack for one of the dogs. Nancekivell remarks, “A lot of our reviews speak for themselves, where people just talk about how excited they are to see their dogs come here. They know that we love their dogs as much as they do. It’s all about how we treat their dogs.”

Something that influenced them to work with the Dogtopia brand specifically is the Dogtopia Foundation, which exists to enable dogs to give back to humans. There’s a literacy program for children where they can read aloud to dogs (and avoid any anxiety they may have about reading aloud to another person) as they learn; another focus is to hire adults with autism to work in the facilities. Dogtopia of Roseville’s current focus is the service dog program for veterans. Hipp, having served in the Marine Corps, is passionate about this cause. The Dogtopia Foundation donates 100% of the funds raised directly to the causes. “It’s not just this entity to make a living, it’s actually doing good,” Hipp says. “It’s creating something that the community needs.”

Stop in and check out the space for yourself at 2216 County Rd D West Unit R or online at dogtopia.com/minneapolis-roseville. While you’re there, be sure to congratulate them on their recent engagement and upcoming wedding!