“I Am Gay” – Jack Jablonski’s Coming Out Story 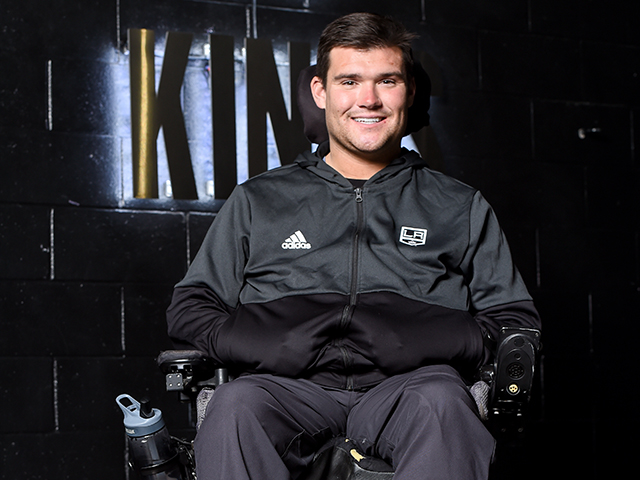 As a sophomore at Benilde-St. Margaret’s School in St. Louis Park, Jack Jablonski was playing his shift during a tournament game on December 30, 2011. In a matter of moments, his life changed. An illegal check from behind sent Jablonski head first into the boards. The impact of this hit severed his spinal cord and have put him in a wheelchair for the past 11 years.

Jablonski was determined to walk again. The support and kindness from his family, friends, the Minnesota hockey community gave him hope, even as he moved to Southern California to fulfill his role with the National Hockey League’s Los Angeles Kings as their Associate Digital Media Content Specialist. He co-hosts the podcast, “Tradin’ Jabs,” which focuses on news and feature stories about the team and the NHL.

There was a twist to all of this. On September 7, Jablonski’s Twitter and Instagram channels featured a post that said the following words: “I am gay.”

A Minnesota hockey icon has come out as part of our community. His post, a graphic in the rainbow colors, Jablonski explained how he had come to this point in his life while working on overcoming his paralysis.

Getting to this point of being out took a global event for things to become clearer is Jablonski’s life. “There were times during the pandemic,” he explains, “especially early on after the realization of my sexuality, that after having been through everything that I had been through with paralysis, and continued to overcome a lot of the things that I’ve been told I can’t do, and physically can’t do, and life wise, career wise, and be able to accomplish a lot. After all of that, trials and tribulations, to then I realized who I was and what I knew I would have to go through to get to where I wanted to be. And that was where I am now.”

Jablonski continued that “it was the process of talking to people, opening up, talking to the organization that I worked for in the Kings, and talking to my Foundation. And all of the pressure that I’ve dealt with of this public figure, who I am in many ways in Minnesota and sometimes in the hockey community, but also there’s a picture that’s been painted of who I am in the public eye. And while, yes, that’s partly who I am, it’s not who I was, because I was also gay.”

In the span of 10 years, Jablonski was navigating through his rehabilitation from his injury. In the process, he had a lot of support from his family, his friends, and the hockey community. A foundation was set up towards research towards creating improvements and speeding up the process to overcome paralysis and spinal cord injuries. To date, the foundation raised $3.5 million towards these efforts.

Since his injury, Jablonski has gone on to graduate from the University of Southern California in Los Angeles. During his time at USC, he interned with the Kings, eventually landing a permanent position with their Marketing, Communications, and Content team at the start of 2020.

Through all of this, Jablonski still had to contend with something else other than his paralysis. “The injury delayed everything in terms of realization, and processing, and understanding who I was,” he explained. “I think for anyone who’s gone through realizing, fighting, understanding their sexual orientation can relate in the sense of we have hindsight 20/20. And, you look back, and at least for me, I look back and I think the thoughts, or the curiosities, or the confusion, or those type of things probably started around maybe 14 or 15, but it wasn’t something that I ever, it’s hard to put into words for me, because at that age I never thought that I was gay. I didn’t understand it and then I’d move on. And for me, it’s a no fault of anyone’s own. I just never grew up around anyone who was gay, so I didn’t have anyone I could go to or ask that I could maybe get answers to.”

“And then for me,” Jablonski further explains, “I played four sports growing up, all the way up until my injury, and stereotypically, quote unquote, masculine sports, and hockey, and baseball, and golf, and tennis as well. So, in my head, as I dealt with this here and there internally on my own, I just never put the pieces together at that time thinking it could be that end result of being gay. So, the injury hit at 16, and that delayed everything because then the next X-amount of years was all focused on recovery and health.

“Obviously as you know,” Jablonski continued, “the media attention, and the publicity, and the public figure aspect of myself grew and grew in those coming years, so it was all a big distraction, and I just didn’t really deal with who I was personally because I was so focused on so many other things. And then I think things started to expand or fast track once I got to college, and that’s when I think denial really hit without realizing it. And, you just pushed it down and tried to live this straight, masculine life while unknowingly ignoring who I was.”

It was at a point here Jablonski fell into a depression as he was dealing with his sexual orientation. “It was just very stressful and a lot of pressure that I had on my shoulders,” he explains, “and I felt like I had nowhere to go or no one to talk to. And I was very down in the dumps and very lonely and isolated because of the situation I was in. And yeah, there were many times where I thought about it of just going five blocks up the road and just putting myself in front of traffic at night and calling it a day. And it’s hard to say, and it’s unfortunate that I felt like I was in that position because I just didn’t feel like I could talk to anyone or make myself feel any better at the time. But thankfully, I’m here to be able to talk about it and have this conversation.”

Leading to his public announcement on social media, Jablonski began his coming out process. “Everyone was amazing,” he explains. “And, it was obviously, I think to anyone who’s gone through this, and that’s a huge part of coming out is the beginning stages of telling those first people, whoever it may be. And for me, I started with my best friend and his response was as amazing as one could respond, nothing but support. And for me, I feel like I was so lucky that everyone who I told was super supportive. And to no surprise, everyone was completely shocked. No one saw it coming. My parents, when I told them, were completely caught off guard and had no idea and shocked, but they were extremely supportive and have always been very supportive of who I am. And since I told them, nothing has changed in the way they treat me, the way we talk to each other. Same with my brother. My brother’s been amazing.”

That also included coming out to his employers, the Los Angeles Kings. “Everyone was very supportive and insisted that it doesn’t change who I am,” Jablonski said. “It doesn’t change my career trajectory. It doesn’t change how I’ll be treated, and so on and so forth. And obviously in the sports world, you just never know, but I could not be more thankful to everyone who is in the Kings organization, because they have been absolutely amazing and I’m so, so thankful.”

Jablonski’s social media post stating who he is authentically was quite powerful. “I have such an amazing response from 99% of the people,” he said. “But it was amazing to see people like [former NHL star] Jeremy Roenick come to my support when people, whether they didn’t agree with who I was or didn’t agree with my choice of publicly stating who I was, that they care for me. They want the best for me. And frankly, when you have a following like I do, or anyone who does publicly, no matter what, someone’s not going to be happy with what you say. And I understood that by putting it out there publicly, not everyone would, quote-unquote, agree with who I am or my decision to post it publicly. And it is what it is. It doesn’t bother me. I’ve been through worse and dealt with worse in my life. So, it’s unfortunate that those people exist, but at the same time, it was very heartwarming to see everyone come to my defense, including people like Jeremy.”

“Life since posting it has obviously been chaos,” Jablonski continues, “but in a great way. I’ve been very fortunate to have a lot of people reach out, both famous people, public figures, or just anyone who’s followed my story or come across my story since the post. Obviously plenty of NHL organizations responded on social media. The Vikings responded on social media. Plenty of activists in the LGBTQ community have reached out and I’ve been very, very fortunate, as well as people in the sports world too. So, it’s heartwarming. It’s great to see that we’ve come a long way in terms of support within the LGBTQ community, and obviously the acceptance in sports as well.”

Currently living in the South Bay part of the Los Angeles area, Jablonski is starting to settle into a life where being an LGBTQ person is congruent with being paralyzed. As we approach National Coming Out Day, his story adds to the many who have been through the same journey as Jablonski undertook to get to today.

Looking back to us here in Minnesota, Jablonski continues to be grateful for the support he has received before and, now, after his coming out post on social media. He can now live authentically as not only a Minnesota hockey icon, but also as one of us. “I wouldn’t be where I am today without everyone in Minnesota,” said Jablonski. “And, I’ll truly never be able to repay them, but I truly, truly can’t thank everyone enough for everything that they have done for me.”