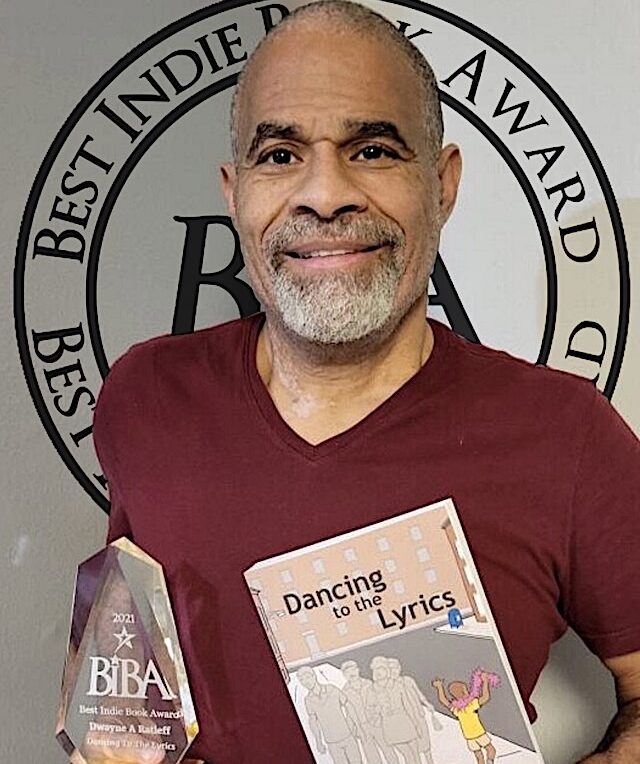 Dancing to the Lyrics, Dwayne A. Ratleff’s first book, is narrated by Grant, a gay Black five-year-old, who has just moved with his two younger sisters and mother to Baltimore to join a new husband and stepdad. The mid-60s were turbulent times for both the city and the country; drugs, murder, racial tensions. Baltimore was a city on the edge.

The child narrator cannot not fully comprehend the greater tides of change, but he is a sensitive, curious boy who knows he’s different. He is attuned to others’ moods and wary of the darkness at home. His first response to the new “Dad” was, “On some level I knew there were two people inside Mr. Ketchum, and one of them is mean,” and is quickly affirmed when Ketchum savagely assaults his wife, Grant’s mother, initiating a calculated cycle of work-drink-abuse.

As Grant narrates his story, author Ratleff interprets and clarifies Grant’s comments, enhancing without overshadowing the child. Grant’s ignorance (the Earth is flat; “Do you have a day called Sunday in Baltimore?”) stems from a lack of access to information, adequate vocabulary or historical context, while his assessments of those around him portend a keen, nuanced intelligence. Grant attends school, and as a counterpoint to ongoing domestic violence, visits and learns from an assortment of unique, free-range adults; blind, elderly Mr. Willy, Miss Penny Pile, Aunt Porch and others. He listens, learns, and discovers who he does not want to be as a man: his father.

A dissonant leitmotif throughout the book are Grant’s comments that he can neither read nor write; not even at the end of the narrative when he, now 10, his sisters and mother leave Baltimore and move north to his maternal grandparents’ home in Connecticut. And nor could Ratleff, at that age; his life is basically Grant’s. How the writer evolved from a held-back, illiterate Special Ed student to an award-winning author was the subject of this recent interview.

Some have listed the book as a novel, but it is at its heart a memoir. “In reality,” explains Ratleff, “the book is probably over 95% true. Only the parts where my memories fail me are fictions. For the most part, those are small. The big things you never forget.” Some of the key characters influencing Grant were conflated; “Mr. Willy, Miss Penny Pile and my Aunt Porch are amalgams. Their actions were real … As a general rule, I don’t like a book that has too many characters for me to follow, so I combined real individuals to make a smaller cast of characters. Each of these characters is a combination of two.”

An obvious question is why was this now articulate author ever a Special Education student? Why was he not helped long before he reached the fifth grade? “I didn’t have one of the seven types of learning disabilities,” Ratleff notes. “I was a late bloomer in a segregated, understaffed school system. Like so many, I just fell through the cracks.

“Instead of learning to read, I tried to hide the fact as much as possible. I think kids’ first instinct is to hide from disapproval and some become very good at it.

“I had to repeat 4th grade and [in Connecticut] was put in Special Education along with my sisters. The class was in the basement/boiler room. Back then, they didn’t have a dedicated classroom for Special Ed. As a matter fact, I believe Connecticut was the first state to address that issue. “At first, Special Ed. didn’t really help me at all. They weren’t addressing the main issue, which was why I didn’t want to read: I saw no point expending all that energy for something I didn’t think was useful.”

Realistically, how could Ratleff and so many other children who had never had access to books, or whose efforts were concentrated on avoiding daily domestic violence, ever have time or energy to consider the printed word? “There were no books in our house until I was 11,” he says. “My grandfather worked for a wealthy man in Litchfield who gave us a bookcase full of books. It was put in my room. It was perfect timing.

“It was also the last two weeks of fifth grade. Because that particular year was really hot, our teachers would make us put our heads down on our desks, then would turn off the light and read to us. The book was Charlotte’s Web. At the end of the hour I wanted more but [due to some troublemakers] the teacher said if we misbehaved, she wouldn’t read to us. Unbeknownst to her, I went around to all the troublemakers in the class and told them I would meet them after school if they misbehaved. I was a bully for literature! Not a proud moment, but I did not want to miss out. That’s when it dawned on me that I couldn’t be dependent on others to read for me. There were whole worlds in books and I wanted to explore those worlds.

“I had to go to summer school that year. But I now had a purpose. Although I would remain in Special Ed for a good portion of sixth grade, I leaped ahead of the other kids as far as reading. By the end of the sixth grade, I’d progressed enough to start reading Hamlet, Taras Bulba, The Picture of Dorian Gray and The Odyssey, that were in that donated book case.”

One incentive to write Dancing to the Lyrics was to show other Special Ed students what they could achieve. He had another as well: “When I starting writing, I wanted to give Grant the child an adult explanation for the things he experienced. When I was a child I always hoped that the future me would come back to me in a dream and tell me everything would be all right. My book was me telling the young Grant everything would turn out wonderfully. Once in a while, I still need to remind the child within of this fact.”

Ratleff’s stepfather also moved north. “He would be in our lives for another six years. Twenty years after that, I took my stepfather out to lunch. As cruel as he had been, I thanked him for the good he did for me. I am not in denial. He was the fire that turned me into iron; an example of what I didn’t want to become. He was a negative influence that I turned into a positive.”

The book is filled with richness, warmth, terror, hope and vivid details; Grant and his sisters dressing in their Easter best to watch Dr. King’s funeral service on TV. Describing the creative process he shares, “I didn’t write or put it together,” he recalls, “I untangled old memories and gave chaos structure. Then put it on paper.

“The biggest problem was how to categorize the book. It is obviously a memoir, but I had to give the living plausible deniability. I also labeled it as fiction because a few of the characters were amalgams. When interviewed on the radio, I was questioned about my choice on this matter. My response at the time was that my book is trans-genre. I think I will stick with that.”