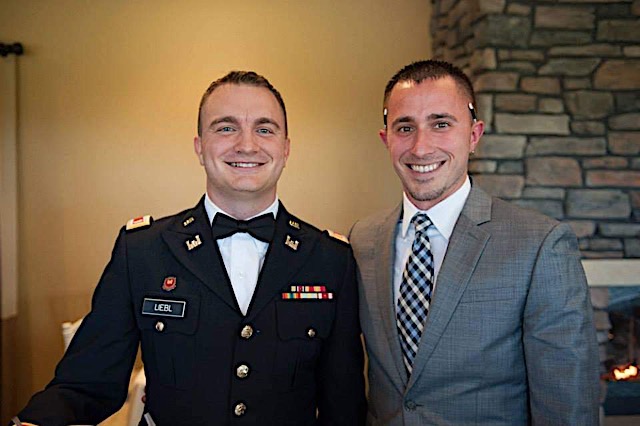 Some things are never easy, but getting to know Captain Zack Thelen-Liebl of the Minnesota National Guard isn’t one of them. He knows who he is, and although it may seem a simple formula, it’s a bold and refreshing take on the authenticity of “what you see is what you get.”

CPT Thelen-Liebl comes from a Willmar, Minnesota family with high military participation on both sides. However, as the youngest of four children he was the last one they expected to join. Even though he always knew he wanted to serve, it was always assumed his older brother would be the one. When he turned 17 he contacted a recruiter and joined the Minnesota National Guard. Two weeks later his older brother followed suit and is currently with an infantry battalion in southern Minnesota as a sniper.

Now 16 years of military service later, he is the Battalion Executive Officer and Officer-in-Charge of the 682nd Engineer Battalion and is about to be promoted to Major. He has worked full time at the Minnesota National Guard since 2018 and came with a wealthy experience of nonprofit work for Habitat for Humanity, a theater company, and a zoo. Even though CPT Thelen-Liebl joined the military before Don’t Ask Don’t Tell was repealed, he’s never experienced anything but welcoming environments and has loved every minute of his service. He adds, “Once the policy was officially repealed, it was still a massive weight off our shoulders,” finally a difference of being an officially valid member.

As he climbs the ranks he is paving the way for LGBTQ representation. Recently CPT Thelen-Liebl and his husband attended an officers conference and couldn’t help but notice the turning heads and the light bulb moments as it was realized they were there together. “We have a fairly large LGBTQ population within the Minnesota National Guard,” says CPT Thelen-Liebl, and they are slowly infiltrating leadership positions, “it’s becoming more common in the officer corps. It’s been a slow roll but now we’re getting there.”

CPT Thelen-Liebl has a leadership philosophy that has three pillars; pride, passion, and professionalism. As long as you take pride in yourself, then you can portray pride in the other areas of your life. He says it’s important however to not confuse pride with arrogance and to be proud of failure, “because you still learn something from it and you’re going to be better because of it.”

He encourages others to always be in a learning mindset because “the individuals that think they know everything already, are the ones that I see fall the hardest in the future.” At the same time he is pushing others to lead, even when they think they might not be ready. CPT Thelen-Liebl says, “nobody’s ever going to be ready, so you just have to execute.”

CPT Thelen-Liebl’s pillar of passion was inspired by Joseph Campell when he said, “Passion will move men beyond themselves, beyond their shortcomings, and beyond their failures.” CPT Thelen-Liebl says, “having passion in what you do is essential to having fulfillment.” For CPT Thelen-Liebl that happens to be in reading and writing. Reading books and reading people, “I can gauge a room really well, I think that helps me be able to relate to people and their different attitudes and approaches.”

That intuitiveness he’s written into a character that will be published in his novel Chasing Shadows this fall. Chasing Shadows is a paranormal mystery novel bordering on horror, that follows a young World War I soldier as he tries to solve a Saint Paul murder in the 1920s.

Professionalism, the final pillar, is not a label that you can give yourself, but a distinction CPT Thelen-Liebl believes only others can give. Calling yourself a professional doesn’t mean much until you’ve gained the respect from others. Not just for rank or status but for who you are as a person, then you’ve accomplished professionalism. He also contends that people deserve a professional leader. CPT Thelen-Liebl says, “it’s about professional development and helping them realize how they fit into the big picture. How doing their piece of the puzzle makes the whole puzzle complete.”

Needless to say, “professional” is the least of the compliments owed to CPT Thelen-Liebl, as he always tries to leave things better than the way he found them. “There’s so much that I can give to other people, so why not do that? People deserve a lot more than we ever give them.”