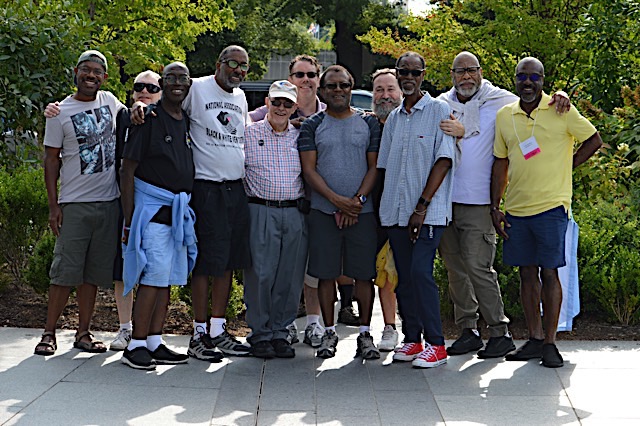 This July 6-9 the National Association of Black and White Men Together (NABWMT) will hold its 2022 Conference in Minneapolis. NABWMT describes itself on its website as “a gay multicultural, anti-racism organization.” It was founded in San Francisco in 1980 and now exists in several local chapters across the country. NABWMT is “committed to fostering supportive environments wherein racial and cultural barriers can be overcome.” Michael Lyde and Tim Springer, who are the 2022 co-chairs of the NABWMT Convention Planning Committee, were kind enough to discuss NABWMT’s history and its plans for this year’s convention.

NABWMT has a long history of using its resources to combat prejudice. “We have always been activists and addressed racism and other isms, like providing cultural-specific outreach around HIV prevention when the disease was taking so many lives, especially black lives,” explains Springer, “We boycotted gay bars that asked black men to show three forms of ID, which used to be a common practice.”

Over the years NABWMT has kept its eyes and ears open, always ready to respond to new needs. “In response to increasing instances of police brutality, white supremacy, and virulent white nationalism, our membership voted to update our mission statement to explicitly name antiracism and other forms of discrimination and inequalities as priorities of our organization,” says Lyde.

The organization was built by and for black and white men, but NABWMT is inclusive. “We have had some very special relationships throughout our history with black lesbian activists who have attended our conventions and spoken at them,” says Springer. Lyde continues: “[I]ntersectionality has always been at the heart of equality and justice movements [so we]…specifically named sexism, transphobia, and economic inequality in our statement of purpose.”

The typical makeup of a NABWMT convention is reflective of its name – about half black, half white, and most attendees are gay men. Still, Springer says, “We are a loving group and welcome allies who know how to respect our safe space.” Lyde agrees: “We welcome opportunities to learn, grow, and partner with our siblings throughout the gender identity and expression continuum [and] the content of our workshops and keynotes is universal, so there is valuable information and skills that anyone can acquire.”

This year’s convention, which will be held at the Minneapolis Bloomington Hilton, will feature many impactful panels, discussions, and more. “Our sharpened focus on antiracism and other inequalities is the major inspiration for our convention theme and our programming in Minneapolis this year…The theme [this year] is Championing Anti-Racism, Leading with Love,” says Lyde. Springer continues: “We thought what better way to guide that work within ourselves and as models for others than with love, which is the ultimate antidote to racism,” explains Stringer.

For the full schedule and more detailed information on all of the above, check out the NABWMT website, which is listed below.

There are lots of ways to get involved with NABWMT during the conference and beyond. Attending the full conference is $200 if you buy your tickets online. This price includes all the workshops, luncheons, and the Saturday banquet. There are options to buy individual daily tickets if you are not free for the full weekend and there are discounts for people under 35, new attendees, and anyone who has not attended an event in ten years or more. More detailed information on tickets and pricing is available on the NABWMT website.

There are several volunteer needs during the conference. These needs range from helping with registration and running zoom meetings to performing in the talent show or donating to the silent auction.

Donations for the silent auction should be made by July 5 at the latest. Lyde recommends donations like “books on race relations [that you]…are done with or other small items our attendees can…take home in their suitcases.” Anyone interested in performing in the talent show should speak to organizers by July 8. “We welcome anyone who likes to do drag, or sing, or play an instrument, or do a brief comedy routine,” says Lyde.

There are long-term options for involvement with NABWMT as well. “If anyone has a strong affinity for our group and wants to help start a local chapter, we’ll team up with you to explore that,” says Stringer, “For the really committed, we welcome you to jump in with both feet and run for a seat on our Board of Directors,” says Stringer.

NABWMT has been building relationships and creating change for over forty years. Its political, personal, and cultural work has created lasting change and strong relationships. “One of the most common words used to describe NABWMT by our members is ‘family’,” says Springer, “NABWMT is a place where we are free to love whomever we want to love.” Check out the conference and see how you can be a part of their story and how they can be a part of yours.