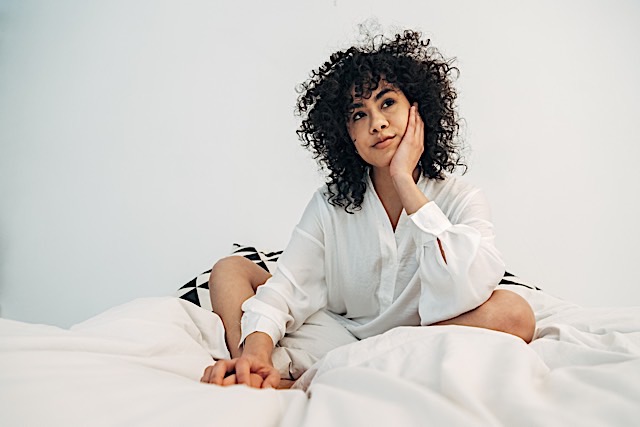 Let me tell you what sex is like for a post-menopausal woman: it ain’t nothin’ to write home about. Yes, it still feels nice, but it is no longer the motivating force in your life. You rarely give it a thought until you’ve somehow stumbled into bed with someone on your way to do something else.

“I used to be pretty good at this,” I thought to myself earlier this week when I wandered into our bedroom to find that my spouse had lit candles, huskily ordered Alexa to play Barry White, and was perched naked on top of the covers.

“Get in here!” she demanded, telling me we had only a half-hour to get the sex done before my stepson returned home. So, that gave me less than an hour to:

And I had to do all of this while ignoring the fact that she kept checking her phone to track the movements of my stepson as he creeped ever closer to our home.

Suffice it to say, I faked my orgasm. But it was still nice. Certainly nicer than getting screamed at for an hour.

When I entered peri-menopause in my late 40s, I was alarmed at my diminishing libido. Since early adulthood, my sex drive had been a constant companion. It was a scamp! Always there to distract me from boredom and lure me into any number of madcap misadventures. It was the driving force behind so many bad decisions, but I never held that against it.

I was born in the mid-1960s. I know you youngsters think of the ‘60s and early ’70s as a time of freewheeling sex and love and merrily wallowing in the mud at Woodstock with a bunch of hippies. But what you forget is that Richard Nixon was elected president in 1968. Richard Nixon—not free love—was the America of my youth.

My parents weren’t prudes. They were sophisticated. My mom wore Pucci cocktail pajamas and hosted fondue parties! And my dad—unlike a lot of the Neandertals of his generation—treated my mom as an equal partner. Yet, when it came to their views on sex, they were both very much of their generation.

When I was in middle school, my mom found Judy Blume’s racy book Wifey under my bed. This book had been passed around the lunchroom for months and it had finally fallen into my sweaty hands. When I arrived home from school, I was greeted by my mom, wielding a vodka tonic in one hand and Wifey in the other, screaming at me for my depravity. Thanks, mom, for creating the template that dictates I can only fall in love with women who scream at me.

(P.S. I later found Wifey on my mother’s nightstand. She had wrapped it in the jacket of another book to hide that she was reading and—I’m certain—enjoying it.)

This shamed me into sexual hibernation until my early 20s when I realized I was gay and all hell broke loose.

Sex was a wonderful surprise! I was delighted that—for me—the act was never mired in guilt or shame despite my mother’s best efforts.

Sex was fun! It created constant drama! It made me obsess over women who weren’t very nice to me!

As I entered menopause and my body began leaching hormones, sex became like a best friend who moves to Europe. After the initial grief, the intensity of your relationship fades. You think of it wistfully but almost never bother to pick up the phone to chat.

After sex stops dominating your thoughts, your mind becomes much less focused on the endless chasing of your youth and much more focused on grounding. Suddenly, I understood why so many middle-aged women take up gardening with such gusto.