Aging and Need: Times They are a-Changin’ 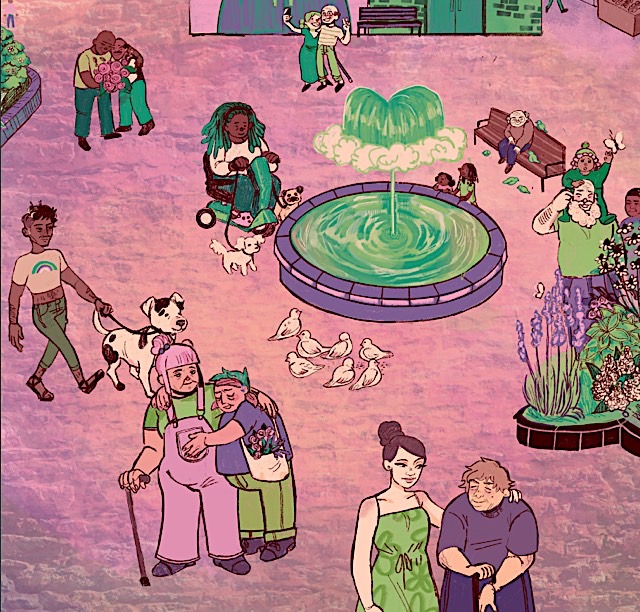 As the LGBTQ  community has fought for visibility and acceptance over the years, its members have also been getting older. SAGE, or Services and Advocacy for Gay, Lesbian, Bisexual, and Transgender Elders, estimates 1.5 million LGBTQ elders in the United States; that number is expected to double by 2030. As members of a largely hidden population, LGBTQ+ elders often face unique challenges regarding health and aging.

The AIDS crisis shook the LGBTQ community for decades – the initial goal was to stabilize and tend to immediate concerns. When antiretroviral therapy (ART) was developed in the mid-1990s, it was incredibly effective for those who were able to access the drug. In 2006 a new phase of the epidemic had become apparent. ACRIA was the first organization to ask the question, “what does care look like for HIV+ aging populations who benefited from ART?”

ACRIA launched their seminal Research on Older Adults with HIV (ROAH) study and later released their widely cited findings. Their work addressed what services and policies needed to be shifted to accommodate this new phase in care. They established a training center that educated organizations across industries on how to best support the aging HIV+ community. ACRIA’s efforts have laid the groundwork for Minnesota’s own care initiative that has been in the making for two decades and is currently led by Rainbow Health.

Rainbow Health’s Aging Initiative is working to promote the health and well-being of LGBTQ elders through research, education, and advocacy. The initiative’s goal “is to increase the likelihood that an LGBTQ older adult or someone aging with HIV will find a provider who can serve them well with respect to their identity or HIV status, ultimately improving health outcomes for these individuals.” Basic expectations should be afforded to everyone – to age with dignity and respect, be free from discrimination, and access compassionate services and support.

Rainbow Health’s Advocacy Agenda focuses on three core areas of care: Ending HIV in Minnesota, eliminating barriers to LGBTQ health equity, and supporting older adults as they age. To address this issue of aging community members, Rainbow Health took on the ‘Training to Serve’ Program in 2018. Like the ACRIA program, it provides training to individuals and organizations to best serve older adults in the LGBTQ community. They provide aging adults with a directory of local service providers who have completed the Training to Serve Program. Rainbow Health (RH) estimates that the curriculum has been provided to over 12,000 service providers in Minnesota.

As we all know, aging is not easy; many physical, mental, and emotional challenges come along with getting older. But our LGBTQ elders face unique obstacles when it comes to health and aging. One of the most significant challenges is the lack of inclusion in research and data collection. The lack of data results in this population becoming essentially invisible, resulting in a severe lack of understanding of their specific health needs.

To combat the lack of data, RH joined forces with the University of Minnesota to survey the aging LGBTQ+ community again and publish the “Minnesota 2022 LGBTQ Aging Needs Assessment Report” with funding and outreach help from over a dozen partners. The principal investigators were Rajean Moone, Maren Levad, and Dylan Flunker.

The survey was first conducted in 2002 and again in 2012. Over the last two decades, promising strides have been made. The study notes, “The most significant change is the increased confidence in receiving sensitive care if your status as an LGBTQ person is known to the provider. The 2022 report shows that 85% of respondents said they were confident that they would receive sensitive care, a number in stark contrast to the 18% in 2012 and the 9% in 2002.” This is excellent news, but there were concerns.

“Solo-seniors,” or seniors who live alone with few family and close friends, have reported a sharp increase in dissatisfaction with the amount of contact with friends since 2015. The solo seniors surveyed were living alone in the Twin Cities. They would most likely not have caregivers, should they need one.

The study ends by recommending that providers be trained in trauma-informed care and that they have a basic understanding of LGBTQ history. They also encourage LGBTQ members of all ages to stay connected through programs to “combat isolation, and increase the safety net for those living alone or who need more support.”

Rainbow health’s aging initiative is a much-needed step in promoting the health and well-being of LGBTQ aging adults and elders. There is another step that community younger community members are responsible for – that’s being there for the people who came before and fought for the world we enjoy.

You can find more about Rainbow Health’s Aging Initiative, their directory of informed providers, and the 2022 Aging Needs Assessment Report here https://rainbowhealth.org/training-education/aging-initiative/.