A Word In Edgewise: Just Another Bead On The String 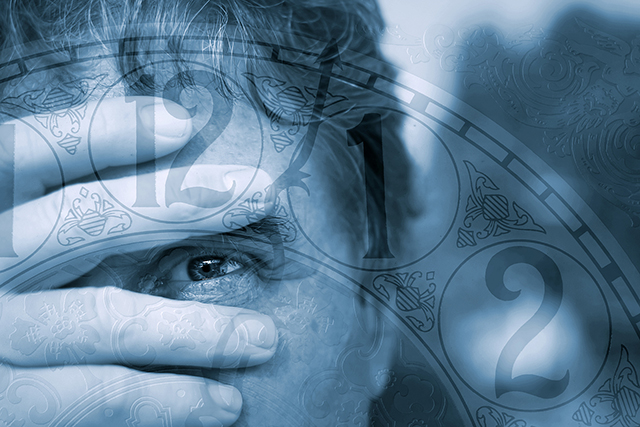 a man hides behind his hand while the clock ticks away

Nothing says “Mortality” like the amplified slap-whoosh-squeak of your blood toiling to oxygenate your brain. I recently had that pleasure.

A carotid sonogram is not a difficult procedure to undergo. You clamber up, fully dressed, onto a table in a darkened room, then lie on your back silent, still. Grade- school teachers, university professors, various bosses have unanimously agreed that my sole area of expertise is lying inert in a dimly-lit room. There’s no demeaning prep, nothing like that once-a-decade colonoscopy, leaving the victim evacuated and goose-bumped in a flimsy gown.

“Just lie there and do nothing,” chirped the tech. For a halcyon moment, I did; until that slap-whoosh-squeak of my inland tides conjured images of Passing Time and The Reaper, tapping his scythe in time with the ebb and flow.

The cheery tech’s performance was a marvel in itself, her hands flying over the complex keyboard faster than a court stenographer transcribing minutiae in a capital case. Medical data, my thoughts reminded, may also dictate capital sentences.

In this particular instance, the verdict brought reprieve. Meeting with the physician to discuss the subterranean voyages of the extra-cranial carotids, the vertebral and the subclavian arteries that had been run through duplex ultrasound, color flow, and spectral Doppler, I learned the study quality had been “Good.” Maybe, he allowed, as good or a little better than in the last go-round in April, 2019. He smiled. “See you in two years!”

Aye, there’s the rub. Tomorrow, DV, I’ll turn 80. My dad didn’t, nor did his father. Lying in that darkened room, I considered the importance of one’s placement in time; where one’s “bead” is strung on the thread of human existence. Dads father, Franklin Pierce (1852-1930) reached 78; Dad, Edmund Burke (1903-1983), was 13 days shy of his 80th, while I, in 24 hours, expected to succeed. Dad had wanted to reach that birthday; my goal is not to best my father, but to “win one for the Gipper,” and hear faint cheers.

Dad died of blocked arteries two years before the Parks Flo-Lab, the imposing machine that monitors mine, was put on the market.

I was not yet a year old when in 1942, Anne Miller became the first patient treated with penicillin, consuming the entire stock of the then experimental drug. In time for my life’s scrapes and scratches, but too late for 16-year-old Calvin Coolidge, the then president’s son, who in 1924 died in seven days from an infected blister.

I contemplated how many ills I’d been spared by my placement in time. Mother had scarlet fever, Dad, mumps. One grandmother carried yellow fever. In the 1940s we feared polio, but then came Salk and Sabin. Now there’s Covid-19, but I’ve had my injections. There will be more ills in the future, but for now, my slap-whoosh-squeak continues. Tomorrow?

I share to show that even dozing slackers can contemplate Eternity.