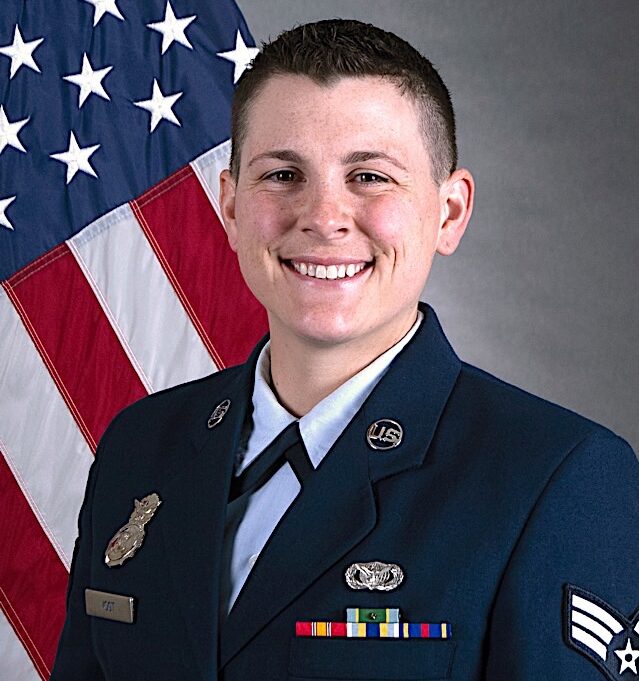 Senior Airman Andi Vogt of the Minnesota Air National Guard has been breaking barriers her whole life. It’s clear that it can at least partially be attributed to a pursuit to absorb knowledge and skills. The other part is her disarming charm, sense of humor, and desire for connectedness. She explains, “I think the more you know, the more valuable you are” as well as asserting, “I can find something in common with almost anybody.”

Growing up, the commonality she found was in male dominated fields. Starting as a little kid playing baseball in the boys league, to becoming a construction and renovation guru, in business with her father flipping houses. She was even approached and recruited to play professional football with the Minnesota Vixen, playing five seasons, and three national championships. Moreover, she is professionally trained in graphic design and cooking, having worked in restaurants for nine years.

In 2018 she finally broke a barrier that had taunted her for a long time, enlisting in the military. “I finally just decided,” SrA Vogt says, “it’s about time. I wanted to be able to protect the people I loved.” In the military, women are still a minority and even more so in policing and security work.

That’s exactly where SrA Vogt ended up. Through the enlisting process she looked at a career path as a first responder. It was while on a job tour that she bumped into a security squadron having some fun on a break and, “I instantly clicked with them.” SrA Vogt explains, “I thought, this is where I want to be and immediately it was just like family.” SrA Vogt then joined the 133rd Airlift Wing’s Security Forces Squadron, based at Fort Snelling.

The Security Forces Squadron is responsible for protecting the people and assets located in and around the Fort Snelling base. Being located near government buildings and the MSP airport, there is a lot of customer service and giving directions. “No there’s no dunkin donuts here,” SrA Vogt has had to tell many people. She’s becoming the squadron’s star comedic member, “at least I think I’m hilarious,” SrA Vogt says, “people think it’s funny that I think I’m the funniest person I know.” Unafraid to be silly or to make a stupid joke, just to get an eye roll or a genuine chuckle, SrA Vogt uses humor to break barriers and connect on a personal level.

This connectedness opens up a channel to teach and share. “I take a lot of pride in teaching, it’s something I’ve always been passionate about,” says SrA Vogt. “The more things I can learn from going through all these careers the more I’m able to teach and guide people. I don’t mind learning the hard way and going through hardships, just so I know how to keep other people from having to go through the same thing.”

It’s always heartwarming to find restored faith in humanity through someone who actually cares for others, and cares about their learning. When new recruits join the squadron SrA Vogt pays attention to learning styles and tailors training to match. “It’s about making them comfortable and making sure that they’re learning in the way they can learn best,” says SrA Vogt. Caring for others so successfully that several trainee’s have started calling her “mom” and she’s all for it.

It’s her undeniable approachability that has caused her to gather so many mentees and friends,“I have a very large friend group of “LGBTQ people that are in the military. There is quite a lot,” reveals SrA Vogt. That approachability and connectedness has also helped catch the attention of her superiors.

SrA Vogt was recently invited to speak on a panel with commanders and other senior officers by the Diversity and Inclusion Initiative Council for the Minnesota National Guard. “I got to speak as a member of the LGBTQ community, getting to share my experiences, and giving my input on what the military could do better, and how to aid progress. It was an honor,” says SrA Vogt. In essence, what she shared is what she shares with others everyday, “being approachable is so important, to let people get to know you,” says SrA Vogt, and get to know them, “Just be an open minded person.”