Our Rides Road Trip: Two To Eau Claire, One With Pride 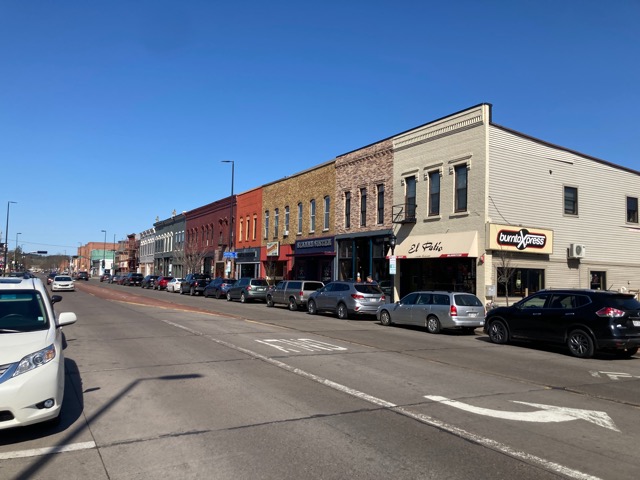 It may be just ninety minutes away from the heart of the Twin Cities and located in another state. Yet, Eau Claire offers a unique perspective that is purely Wisconsin.

That’s really the challenge in a nutshell. The challenge to include Eau Claire and the Chippewa Valley as part of our extended region or just recognize it as its own geographic ecosystem.

Let me say this: I love the Chippewa Valley. I hope that our readers in that area would welcome that summation. There are plenty of reasons why.

I will give one right now and pertinent to my recent journeys to the Chippewa Valley: The stress level that I have back in the Twin Cities is suddenly reduced when I get to the Elk Mound cut-off where Wisconsin Highway 29 splits from Interstate 94.

The Chippewa Valley is a lovely place to breathe. It usually has plenty to do. You have to find your fun. And, your community.

For the magazine, I committed myself to go to their Pride celebration at Phoenix Park along the banks of the Chippewa River., right where the Eau Claire River splits. I wanted to make sure that I am acutely reacquainted, so I took a drive out that way prior to the attending Eau Claire Pride.

My first brief run was in a rented 2020 Kia Forte. Quite a fun car wrapped in a basic package, but it got me there and around town with poise. My overnight stay was at the Home2 Suites at the Oakwood Mall. Both this and the Hampton Inn in Chippewa Falls are the two best places I stayed at in the area. I know the Linsmore Hotel – a Doubletree by Hilton property – is the most preferred place to stay, because it is at the heart of downtown Eau Claire.

As I said, there are plenty of things to do in the Chippewa Valley. On Saturday mornings, you have the Farmer’s Market along the river near Phoenix Park. The Pablo Center at the Confluence is truly the center for the arts. Haymarket Plaza bridges both the Pablo Center and Phoenix Park by creating a relaxing and creative hub overlooking the Chippewa and Eau Claire Rivers.

Then, came my run to Eau Claire Pride. It was done in a much less efficient, massively huge, and extraordinarily expensive 2022 Lexus LX 600. I mean…who attends a small town pride in a $129,000 luxury SUV?!?

Expensive SUV aside, the forecast of rain may have cancelled the Zumba and yoga pre-Pride events, but it did not deter the community from attending the festival along the river at the park. It was a decently-sized event that stretched from the street down to the small beach along the river. You had a variety of booths

They also had gymnastic dancing on the street. They even performed during the rainstorm. Those women were indeed troopers!

The one thing I have been observing at this year’s Pride celebration was the outpouring of young energy into these events. I noticed this in Rochester, Pine City, and just recently in Chaska. I am expecting this to continue into Twin Cities Pride – and every other Pride stop I will make this year on behalf of this magazine. We need our youth and help them to gain a significant role in our community for the decades to come.

Also, notice the flags they draped over their shoulder. There are so many flags. The acronym LGBTQ was more than represented at Phoenix Park.

For me, it was not what I’ve seen at Chippewa Valley LGBTQ Pride at Phoenix Park. It was the conversations. They ranged from the urgency to uplift youth in rural communities to the discovery of Pride celebrations beyond Eau Claire and La Crosse. Places, such as Marshfield, Medford, and Menominee, are celebrating LGBTQ Pride in Western and Central Wisconsin in June alone.

I took the time to talk to an organization called TRANSforming The Valley, who is doing great work in the area. They host a Trans Closet, where you can donate articles of clothing and personal care items that are gender affirming at two locations – one in Eau Claire, the other in Chippewa Falls.

It was at the same booth that I learned about Andrew Cray and the scholarship that was established in his name. The Cray surname is a prevalent one in Western Wisconsin, as the supercomputer company that bears that name was established in Chippewa Falls. After affirming his gender, Cray would marry a trans statesperson while dealing with his battle with cancer. Cray would succumb to that disease in 2014 at the age of 28, while becoming the face of the struggle towards fighting healthcare discrimination against the trans community.

The people upholding Cray’s legacy are heroes in my book. They are showing us love and light; beacons for all of us.

Eau Claire and the Chippewa Valley are not just destinations within 90 minutes of the Twin Cities. They are a vibrant community that offers a lot more than one would assume. This place does not sleep, but can share its light upon all of us across the Upper Midwest.

I am also grateful for the friends I have in the Chippewa Valley. I ran into one at Pride, a morning drive-time radio personality whom I’ve known when we were just automotive content creators spanning almost a decade ago. He’s an ally – a really awesome one!

When you venture into Western Wisconsin, be open to how welcoming these people are. Hospitality runs deep in these parts. Embrace the welcome and enjoy the confluence of the two rivers through Eau Claire.