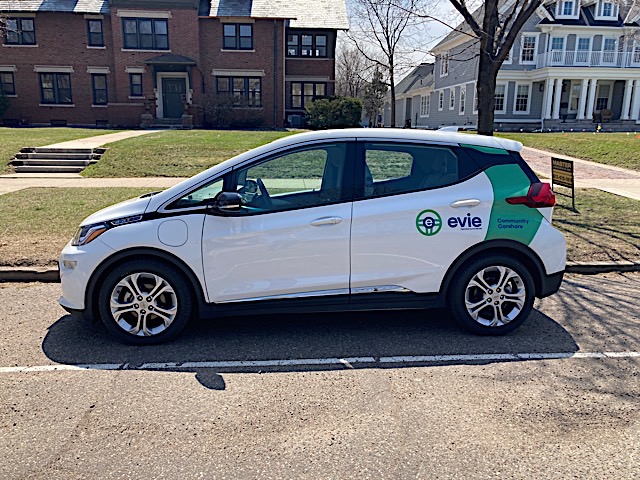 While we have been one of the first demographic groups to embrace the electric vehicle, there are many of us who wished we had access to one.

This is not just a chance to own one, but to experience one – at least.

The Saint Paul-based non-profit car sharing organization, HOURCAR, came up with a solution that brings its members closer to experience an EV. They call it Evie.

HOURCAR began as a program under the former Neighborhood Energy Connection in 2005. In 2017, HOURCAR spun off as its own nonprofit. Since then, HOURCAR expanded into Rochester in 2019. It is also the first car-sharing firm to offer a program for low-income users to access their fleet.

As part of HOURCAR, Evie began as a concept to “establish an electric carshare network with a focus on service to underserved communities,” according to James Vierling, the Head of Growth, Marketing, & Communications at HOURCAR. Through conversations with the City of Saint Paul, Xcel Energy, and eventual partnerships with various community organizations, the plan to establish this network of EVs car sharing went into effect just this year after running a pilot program last August and September.

Evie does not use a hub system as HOURCAR does. It is a “free-floating” system where Evie’s Chevrolet Bolt EVs are parked in random locations within a specific geographic zone. These vehicles must adhere to local parking rules to be fully utilized by its members. A smartphone app with direct users to these vehicles. When they arrive at a vehicle, they can use their smartphone app – or a Metro Transit GoTo card – to unlock the Bolt EV and go on their drive. The same app or card is also used to lock the vehicle.

Membership plans are available for Evie with no monthly fees for some users. HOURCAR members also have access to Evie vehicles, as well.

Unlike many plans to bridge electric vehicles to interested parties, HOURCAR created a strategy that is designed to “help address environmental, social, and racial inequities in the transportation system,” explained Vierling. “Evie has high goals to achieve as well, 50% usage by BIPOC members, 40% usage by very low-income members, and 20% usage by very low-income BIPOC members by 2026. Minnesota’s #1 greenhouse gas emissions is from the personal automobile, with the worst air quality being in low-income and diverse neighborhoods.” This also include LGBTQ people who are identified within these key populations.

In addition to the Chevrolet Bolt EVs, HOURCAR also added the EV Spot Network as a charging network for their vehicles run by 100% renewable energy. “Any Evie that drops below 25% charge automatically becomes unavailable at the end of the trip,” Vierling stated. “This triggers our team to go out and bring the car to an EV Spot Charger. Members can charge their Evie as well – there are green EV Spot Charging cards in the glovebox.”

For longer trips, there are charging cards for networks outside of EV Spot Charging and ZEF Energy’s own charging stations. This is designed for when a user takes an Evie Chevrolet Bolt EV on a longer trip. Right now, the EV Spot Charging network consists of Level 2 charger with future expansion to add DC Fast Chargers to the network.

This all sounds like a great way to get around town. Here is a rundown on what to expect using this service.

All you need is to download the HOUCAR app for your smartphone and make sure you have an account set up with the car sharing service. Use the app to locate an Evie car – especially in most of Minneapolis and Saint Paul. Once you locate one on the map, click it to reserve it.

Once you get to the car, click on the icon to start your trip to unlock the vehicle. At this point, getting comfortable is important. Just start the start button, put it into the right gear, and go.

If you’re making a stop somewhere and is not done with your trip, the app has a “Pause Trip” button. Getting back into the vehicle, you can simply “Resume” your trip until you’re complete. Once done, make sure you park within Evie’s geographic zone before finishing your trip. One click on the app, and you’re done.

That’s it! It’s as simple as touching your smartphone from spotting a vehicle to finishing your drive. Your responses from the app is recorded via a reader, which can also be used to tap your connected Metro Transit GoTo card in and out of the vehicle.

You may find that Evie could be your introduction to electric vehicles. Or, a solution to drive one when it is cost prohibitive. Even if you live in a multi-dwelling unit where the chance of a charging station going up is slim or none, Evie is a great way to get yourself going without worrying about gas prices or adding to the Twin Cities’ carbon footprint.