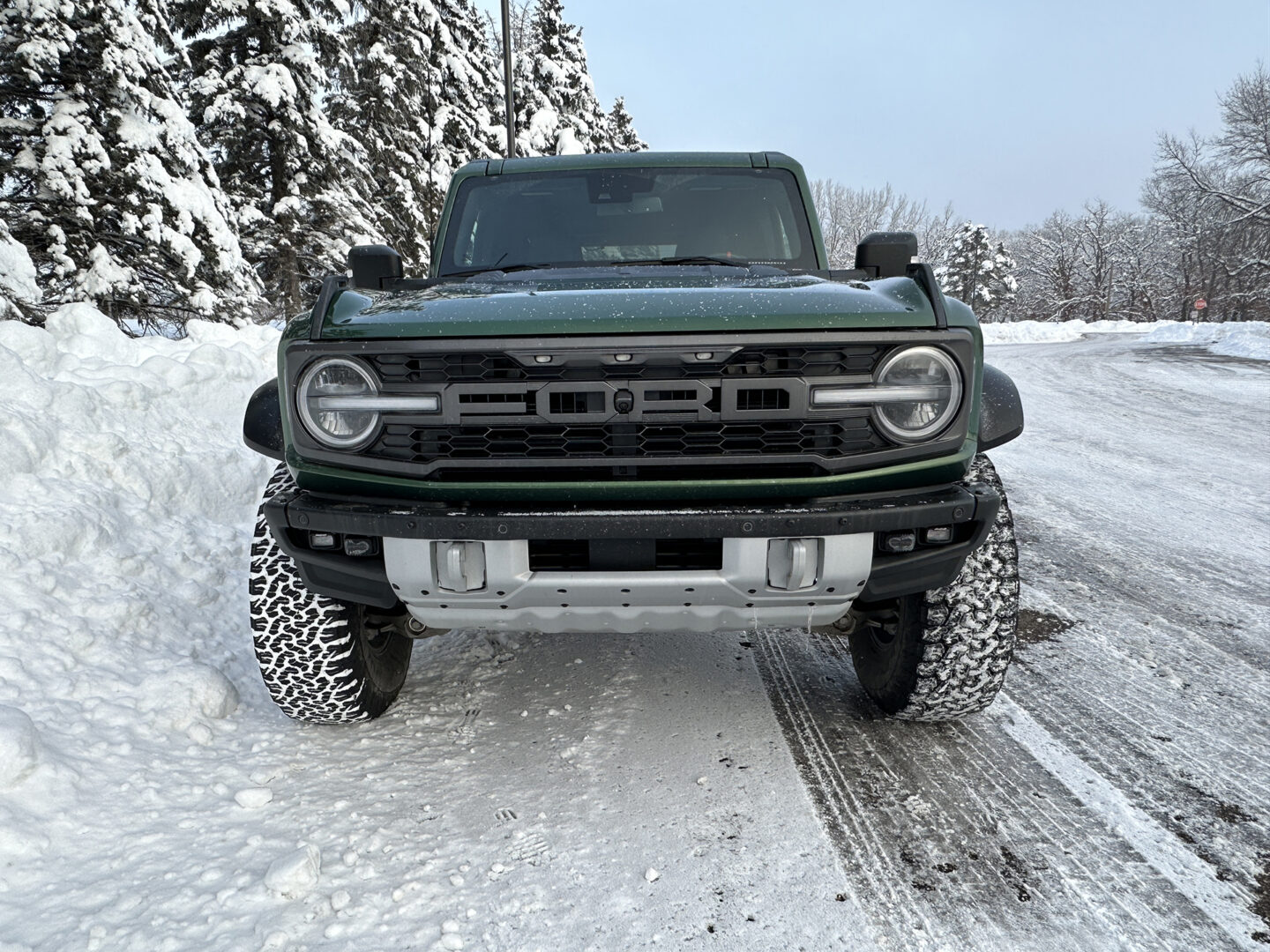 In mid-2021, this magazine heralded the arrival of the long-awaited Ford Bronco. The resurrected off-road ready SUV gave us a glimpse at its past with many modern twists.

The “real” Bronco truly needs no introduction. It is built off of the Ranger chassis at the same Wayne, Michigan assembly plant. It comes in two- and four-door models with either a soft or hard top, a lineup of trim levels, and a choice of a turbocharged four-cylinder or twin-turbocharged V6 – depending on which trim level you choose.

If that’s not enough, there’s this: The Ford Bronco Raptor.

Let’s be serious for a moment. It’s never enough for a “mere” Bronco. They’re designed to be tough, rugged, all-terrain and weather vehicles. They are supposed to be the direct rival to the Jeep Wrangler. But, sometimes, a Wrangler is not enough for some folks, too!

So, what is this Bronco Raptor for? Don’t answer that just yet…

What Ford did was to elevate the Bronco to make it more capable, more powerful, and more rough, rugged, and raw. Yet, it drives so nicely on many surfaces.

How? If you look deep into the wheel wells, you will find the upgraded HOSS 4.0 suspension setup. The key to this suspension is a set of FOX Live Valve 3.1 Internal Bypass Semi-Active Dampers to help soften – if not, manage – the terrain below. In addition, the Bronco Raptor also includes a front stabilizer bar disconnect. While delivering a softer, more balanced and smoother ride, it also helps in axle articulation when the surface becomes uneven. You can see it flex when you go over rocks or severely rutted roads.

After a huge winter storm that dumped many inches of snow onto our roadways, the Bronco Raptor also showed off another trick in its toolbox – the Terrain Management System with seven G.O.A.T. modes – translation: Goes Over Any type of Terrain – to choose from. One such G.O.A.T. mode is Slippery, which works when the surface is wet, snow covered or icy. Each mode is preset for the four-wheel drive system, transfer case, front and rear differentials.

You can select the G.O.A.T Modes through a dial on the center console. You could also switch to two four-wheel drive modes using the buttons in the middle of dial, including a 4L or low-range mode. The dashboard also includes additional locks for both front and rear differentials, as well as center transfer case lock. All of these will come in handy when you get into some serious off-roading or to get through an unplowed street.

If you want to tackle everything with no concern about power or traction loss, the Raptor’s driveline delivers it all with ease. It simply goes. No apologies.

Except when it comes to fuel economy. I ended up averaging 15.1 MPG. That’s what the Environmental Protection Agency states it should average. Then again, we’re talking about a vehicle that weighs close to 5,000 pounds designed to attack mountain passes and desert floors.

Aside from the brass tacks, what attracted me to the Bronco is the way it looks. The design brings you back to the original 1966 model: A squared off body that is both modern and purpose-built. Ford brought in many cues from the original, such as the round headlamps and removable doors and roof that invites you to tackle anything in its wake.

Funny thing, the original Bronco never came in a four-door model. Just the two-door. You have no choice to go with a four-door on the Bronco Raptor. At least this one came with the hardtop that has removable panels. Eventually, you can remove the hardtop – and the doors. A glance at Ford’s YouTube channel on the “how-to” videos on removing the roof and doors will recommend having another person help you in doing so. They’re not light, folks!

After you have removed the roof panels and doors, they are conveniently put into their bags, which attach to the rear seatbacks in the cargo hold.

Another modern Bronco touch is the entire interior. You get bolstered seats in a mix of leather and cloth up front, with the same upholstery in the rear. They are firm, but supportive. You can seat up to five people inside. While you can fit up to 33.4 cubic feet of luggage behind the second row of seats, it does expand to 73 cubic feet with those seats folded down.

The instrument panel is a 12-inch digital instrument cluster that is customizable and very informative. The center 12-inch touchscreen is powered by Ford’s SYNC 4 infotainment system, which serves as a hub from a Wi-Fi connection to smartphone integration. Controls and switches are tactile and logical to operate.

Ford offers ten Bronco trim levels in total. Most models you can get in two- or four-door versions. You may get one with a soft top instead of a hard top. Pricing for a new Bronco starts at $32,295.

As I mentioned before, you can only get the Bronco Raptor in a four-door model. In total, this tester came with a sticker price of $75,770. Keep in mind, these are hard to find, and you will have to order one. Then again, you might get lucky and find another Bronco that may be suitable for your needs.

We can say that the Ford Bronco is a hot commodity. It is easier to drive, to use, and to point into any terrain you wish to conquer.

However, if you want something more than just a Bronco, put in an order for the Raptor. After all, it fits the person who is truly beyond just “born wild.”