Why Black Pride Events are Essential 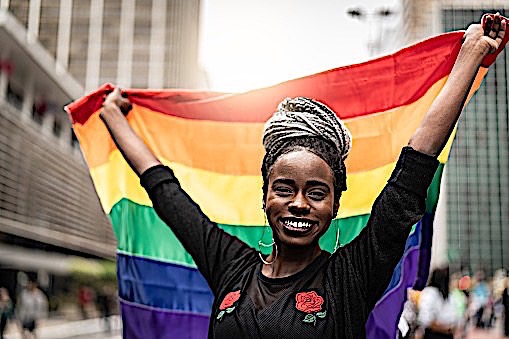 I’d like start by level setting this article with a quote from actor/activist Wilson Cruz which he shared with us during the 50th anniversary of the Stonewall Riots at NYC/World Pride in 2019:

“The reason why we call it Pride is because this was a community that was forced to be ashamed of themselves and the people who started this [gay pride] march back 50 years ago decided they wanted to take that name and remind people to be proud of who they are and who they love.”

I ask that you remember this quote as you read this article. If you feel some discomfort with what you are reading and those feelings to bubbling up, I ask that you circle back to this quote. Now let’s begin…

The history of Black Pride is a concurrent story with the development of Gay Pride. By now we’ve all seen the photos and heard the stories about our forbearers standing up and fighting back against discrimination and harassment by federal/state/local laws and by the police force. They grew tired of being told what articles of clothing they could not wear or with whom we could dance. The New York State Liquor Authority frequently penalized and even shut down venues that served alcohol to “known or suspected” LGBTQ individuals, proclaiming the mere gathering of LGBTQ people was “disorderly.” Police raids on our coveted gathering places for over a decade had reached a fever pitch. Those at the Stonewall Inn on the night of June 28, 1969, had had enough. The Stonewall Inn was an institution in the LGBTQ community, but particularly within the Black LGBTQ community. At one point a police officer hit a Black lesbian over the head with their baton while forcing her into a patty wagon. This is when the riots began. The crowd largely made up of Black gay men, lesbians, transgender women, and drag queens not only fighting back against the police but fighting back against this continued oppression and harassment. Present during the riots were Marsha P. Johnson, Silvia Rivera, and Stormé DeLarverie all Black and Brown members of the transgender and gender-nonconforming community. There connection to this history has only recently been celebrated by the broader LGB community.

Pride has now evolved into a full-fledged rejection of what mainstream American society/culture claims to be right, normal, beautiful, acceptable. In fact, the LGBTQ rights movement has mirrored the tactics paved for them through the Black civil rights movement of the 1960s. Yet, unlike the centuries long quest for the equality of Black people the LGBTQ movement has garnered much greater success in a much shorter period of time.

The concept of code switching happens in every family, workplace, and community. This type of “behavioral adjustment” involves adjusting one’s speech pattern/tone, conduct, appearance, and even expression to optimize the comfort of others in exchange for professional opportunities, fair treatment, inclusion, and/or quality service. We don’t speak the same way to our parents or grandparents than we would to our best friend while out for a Friday night on the town (you feel me?).

One of the most powerful elements of attending Pride events is the ability to be your true and authentic self 100%. But would Pride be the same if you still had to censor yourself? If you had to “tone down” your gayness, your lesbianness, your bisexualness, your transness, and/or your queerness? Many of us are required to do this in our daily lives either to maintain our place of employment, our housing accommodations, or even for our own physical safety. It gets exhausting.

Now let’s add the additional (intersectional) layer of race into this discussion. Many, and I mean many, members of the Black community feel they must “conform” to societal (White) norms as a means of survival. Navigating these interracial interactions successfully have long-term implications for our own well-being, economic advancement, and even physical integrity. We code switch not for the luxury of others but for our own physical, mental, and emotional well-being.

Sadly, many within the BIPOC (Black and Indigenous People of Color) community feel the need to code switch at Pride events as-well because when we don’t, like during the Minneapolis Pride Parade protests of 2018 & 2019 prior to the murder of George Floyd, members of my community were booed, shunned, and ostracized from the broader LGBTQ community. They were trying to convey, much like our Black predecessors during the civil rights movement of the 1960s, that we were not ok and we needed the support of our allies to enact systemic change. Pride festivities across the country, including in Minneapolis, are very White. It can be a challenge and even harmful to our individual spirits to be told and encouraged to be our authentic LGBTQ selves at Pride while in the same breath scoffed at for bring our authentic blackness to the festivities.

Let’s not forget that the end of legalized segregation occurred with the passage of the 1969 Civil Rights Act. The concept of integration was still very new to everyone including the LGBTQ community. Hence, some of those feelings/beliefs/vestiges from the past were still alive and well as the formation of the country’s (now historic) LGBTQ rights organizations like the Mattachine Society, Daughters of Bilitis, and Gay Liberation Front were being formed. One need only look at the photos and rosters of these organizations to see that there were very few, if any, members of the Black and brown communities at their founding and even decades into their existence. The demographics current national and local LGBTQ organizations haven’t changed much since then.

Minnesota People of Color Pride (MN POC Pride) was born from a long history of Black Pride events dating back to May 1975. The “Children’s Hour” was a Black gay & lesbian festival that took place over Memorial Day weekend in Washington D.C. The term “Children” was born out of the Black LGBTQ ballroom culture where house mothers and fathers took on the care for young members of the LGBTQ community that had been kicked out of these homes and left to fend for themselves along on the streets. This annual gathering continued until 1990 where attendance began to wane as the HIV/AIDS epidemic continued to surge and devastate our community. Not wanting to lose this important and essential cultural event, Welmore Cook, Ernest Hopkins, and Theodore Kirkland organized the nation’s very first Black Gay Pride on May 25, 1991, to raise funds for local HIV/AIDS organizations who served the local Black community. The first pride had 800 attendees while now there are over thirty-three domestic and seven international Black Pride events with over 325,000 attendees annually. In 1991, a meeting spearheaded by Earl Fowlkes Jr., President of the Federation of Black Prides (FBP), took place in Washington D.C. of Black Pride leaders from Chicago, New York, Detroit, North Carolina, and Minneapolis. Over the years, the need for Black Prides continued to grow domestically and internationally resulting in the FBP rebranding to the International Federation of Black Prides (IFBP) and most recently to the Center for Black Equity, still headed by Earl Fowlkes Jr.

The mission for the MN POC Pride is “Uniting BIPOC LGBTQ+ people in celebration of beauty, culture, and love, with a focus on ensuring equity, racial justice, and economic opportunity, especially for our most vulnerable community members.” Since 2014, the organizers of this pride have focused on connecting and serving the LGBTQ POC community state-wide through “HIV health advocacy, furthering our civic engagement work, the constant fight for LGBTQ people of color equity and equality, and producing our annual Twin Cities Black Pride Festival.”  Issues of race, culture, class, political and sexual health aren’t always at the forefront of mainstream pride festivities. However, these are issues that at essential and pertinent to our community.

While the name of the event is POC Pride, we recognize that not one progressive social justice movement in this nation has been successful without out allies. So yes, non-POC members of the community are welcome to attend, learn, and support our mission for a more just, loving, and accessible world for everyone. We just ask, much like the LGBTQ community asks our cisgender and/or heterosexual siblings visiting our LGBTQ spaces, that you respect both the space and culture of those who have invited you in. We ask that you center the voices of those who have invited you in. We can all learn so much from each other when we can all finally be on and even playing field.

This year’s Twin Cities Black Pride 2022 Festival will be taking place August 18-21, 2022. MN POC Pride will be working in tandem with Twin Cities Pride, regarding the Twin Cities Pride festival kicking off the summer in June 2022, with the MN POC LGBTQ Pride festival closing out the season in mid-August, just before the Labor Day holiday. Pastry Chef Mike Walker shared his reason for attending Black Pride events as “our community being more beautifully diverse than most people realize. This is also the one time of year when our community can come together and truly celebrate, and I mean CELEBRATE, spread love, joy, cheer and it’s a wonderful time to see friends and loved ones that one doesn’t see regularly.” At last year’s event I was blessed to witness Mike reconnect with an old friend from his late teens that he hadn’t seen since his college days. Pride events, regardless of what kind, are akin to a family reunion.

With more and more people, especially the 21 percent of Generation Z adults, self-identifying as LGBTQ, and the Brookings Institute projecting the U.S. will become a “minority white” county by 2045 the need for safe spaces for LGBTQ BIPOC folk will become more and more essential. Sonya Boyd, a volunteer at last year’s MN POC Pride, shared as we discussed the challenges POC folk face when issues of exclusion at mainstream prides are discussed with non-POC folk “I know you’ve just used several micro aggressions towards me but while I’m wounded can I help you find ways to be more inclusive towards us?” The burden for being inclusive rests in the hands of those who are in positions of power and influence. Eliminating the need for there to be Black Pride events is akin to there not being the need for an LGBTQ bar or gathering space. We’ll cross that bridge when there is no homophobia/transphobia in the broader community and when there is no racism within the LGBTQ community. However, in the meantime, let’s all support those within our community who are the most marginalized and need the most help/support and I hope we can agree that includes transgender and non-binary POC.