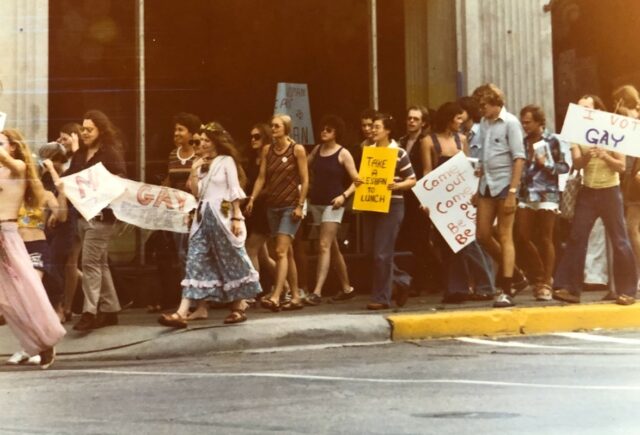 Photo courtesy of The Tretter Collection

Elizabeth Barnard came out in 1975 after her divorce. She quickly became involved in a segment of the local lesbian community, which they called the women’s community, which is how she discovered that she was attracted to women.

“One of the norms of that community was nonmonogamy. It was not required to have more than one partner, but it was the norm, which in the ‘70s was an expectation,” Barnard says. “That caused some turmoil. My partner had another partner—the “real” one—but it wasn’t for us, and my partner broke off from the other one, which caused its own turmoil. But we maintained a steady monogamous relationship for almost three decades, until her death.”

Politically, there was a lot going on, too. “There was a push to repeal the protections given to LGBTQ+ people in the area of housing and work; a lot of us campaigned against that initiative. I thought it would be good to make some kind of affirming political statement, so I came out in a letter to each of my family members and all of my parents’ close friends,” she says. “They didn’t like that much, but they weathered it, and it saved them from having to decide whether to tell anyone they knew or not.”

Music was also central to the community. Barnard says they followed songwriters and performers avidly, with many concerts where she knew almost everyone in the audience. “They felt like community gatherings, whether they were held at a coffeehouse, or O’Shaughnessy Auditorium at St. Kate’s,” she adds.

Originally from Manchester, Connecticut, Barnard moved to the Twin Cities in 1972 with her then-husband after a two-year service in the Peace Corps in South America. Once she found a home in the LGBTQ community, she discovered queer-friendly spaces.

“My partner and I liked to go dancing, and in most places, of course, heterosexuality was the norm. It was a treat to go places where women could dance with women or anyone could dance with anyone,” Barnard says. “A Woman’s Coffeehouse was in the basement of Plymouth Church, and women flocked there every weekend for concerts and dancing; it was alcohol-free, which distinguished it from the “bar scene,” the other option for getting together.”

She adds, “Foxy’s was a place on University Avenue in St. Paul where lesbians and gay men could freely socialize and dance. It was a bar but very welcoming to all; dancing was more the focus. More recently, Lee’s Liquor Lounge at the edge of downtown Minneapolis was very welcoming as well, and they had really good music. I actually don’t think any of those places are still around, sadly.”

With the closing of places like Foxy’s, Lee’s, and A Woman’s Coffeehouse came a shift in scenes of the LGBTQ community across the Twin Cities. But, Barnard points out, there are some things that have not changed, of course.

“There is still discrimination, disbelief, bullying, harassment, and (sadly) killings. There are more protections for us, and greater overall acceptance, but the focus of discrimination has shifted slightly toward trans people and youth,” she says. “And, of course, Black, Indigenous, and people of color have always had to face discrimination. As LGBTQ+ couples have had children who get into the school system, non-traditional families are much more normative than they used to be. Socially, there are quite a few gathering spaces that are no longer there.”

Despite this chapter of LGBTQ history in the Twin Cities having closed, experiences like Barnard’s are kept alive through storytelling. Telling Queer History is an organization that connects LGBTQ folks to share their histories, allowing people to have a space to grow in their understanding of themselves, each other, and their collective history. Telling Queer History, which was founded in 2013, offers a series of storytelling gatherings that brings together LGBTQ people of all ages, so stories like Barnard’s are not forgotten.

While LGBTQ spaces and bars certainly aren’t a thing of the past, places like the ones Barnard and her partner used to frequent unfortunately are. Not only did these spaces provide Barnard and the rest of the LGBTQ community safe environments to gather, have conversations with fellow queer people, and discover relationships, but they were also opportunities for LGBTQ folks to own the spaces they gathered in.

“They were run by LGBTQ+ folks, as far as I know, so we were not an aberration or even a curiosity,” Barnard explains. “They were places we could feel at home.”