The Present-Day History Of The Civil Rights Movement 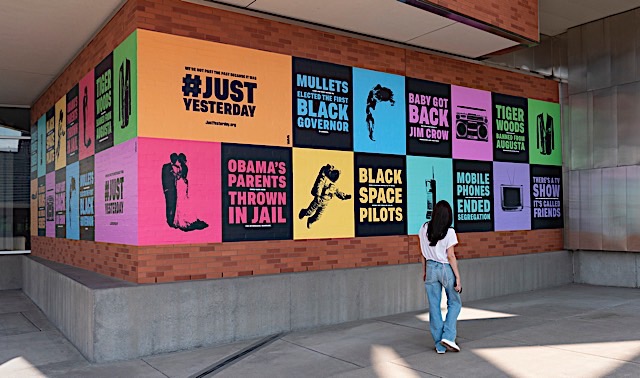 The Weisman Art Museum’s new exhibit is highlighting the thousands of police murders of Black people each year, mass incarceration, and other forms of systemic racism that persist today.

“For many white Americans, and white Minnesotans in particular, there is a cognitive dissonance between slavery, the Jim Crow era, and ongoing systemic racism. When confronted with these facts, there can be a level of discomfort. We hope that sitting in this discomfort can bring new knowledge, awareness, and perspective,” says Katie Covey Spanier, Director of Public Programs and Student Engagement for the Weisman Art Museum (WAM).

“Throughout the run of ‘Just Yesterday,’ there will be commissioned content, calls to action, and workshops by and for BIPOC students, scholars, artists, researchers, and community members,” Covey Spanier says. “We aim to highlight and support the deep work that leaders are doing across campus and in the community to address and dismantle the policies, practices, and procedures that continue to uphold white supremacy.”

For example, the COVID-19 pandemic has brought social and racial injustice to the forefront of the public health conversation, Covey Spanier adds.

“The startling and disproportionate death rate among Black Americans around the country reveals consistent inequalities in access to and quality of healthcare. Studies have reported that one of the key contributing factors to these disparities is the cultural incompetence of health care providers. In order to effectively address this, Universities like ours need to recruit, train, and retain BIPOC-identifying health care providers,” she says. “We are working with researchers and artists from the University of Minnesota Twin Cities, and the Rochester Center for Learning Innovation on an arts-based workshop for BIPOC medical science students that names instances of racism and bigotry that have been built into systems of care, while creating space for healing this trauma in both personal and professional practice.” 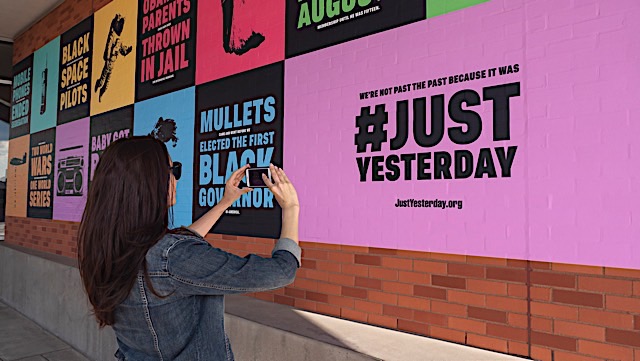 The “Just Yesterday” exhibition has a dedicated micro-site with deeper information about each of the posters included in the installation, as well as a space for community members to share their own “just yesterday” story.

“We aim to highlight these community-sourced stories as a source of inspiration and reflection, and to challenge the complicity in the act of forgetting—the posters highlight acts of systemic racism so recent, they really are just yesterday,” Covey Spanier says.

“Our museum, like many others across the country, was at a point of deep reflection after the murder of George Floyd. How could we make a public statement about our solidarity with the Black Lives Matter movement without making space to address our museum’s own legacy of colonialism and white supremacy? How could we approach this work through a trauma-informed lens? Furthermore, how could we make sure that the work of diversity, equity, access, and inclusion is prioritized throughout the entire museum ecosystem? We have spent the last year working with and listening to community members on what the Weisman means to them and the role that they hope WAM can play in their lives,” Covey Spanier adds.

“Just Yesterday,” and the accompanying programs and initiatives, contribute to these efforts that advance the museum’s commitment to anti-racist, equity-based action. “We hope that people will walk away from the exhibition with an appreciation for the profound ways that Black Americans have overcome barriers to shape the landscape of U.S. society; we also hope visitors feel compelled to interrogate, question, and take action against systemic racism within their own scope of influence,” she adds.

One of the artists who created “Just Yesterday,” art director Mike Gaines, says that, int he days following the murder of George Floyd, they were tasked with finding a way to raise awareness for and change people’s perspectives on social injustice.

“Most of the narrative surrounding the civil rights movement makes it seem like an era in the distant past, when in reality, we are still very much in the midst of it,” Gaines says. “We wanted to draw attention to the recency of these events by juxtaposing them with memorable and nostalgic cultural touch points.”

Gaines says that the messaging of  “Just Yesterday” is primarily for non-Black people to realize how close we as a society are to Jim Crow segregation and other forms of injustice. “We hope that viewers will choose to educate themselves further and get involved so that these unfortunate occurrences stay in the past,” he adds. 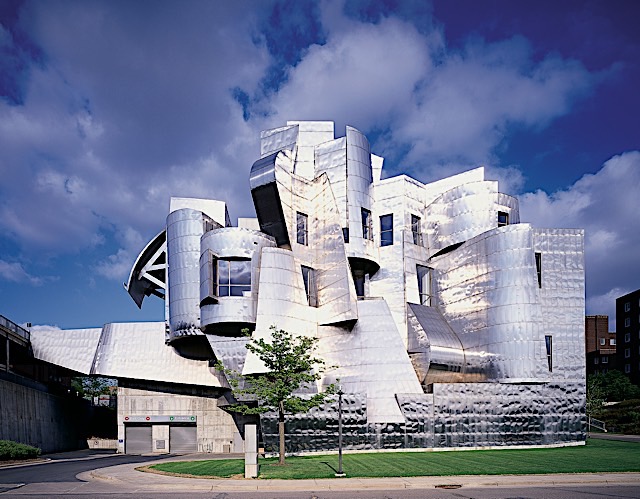 “People should know that Black people’s struggle for equality has lasted centuries and continues to do so. It is often accepted or thought that we reached perfect equality with the signing of a certain bill, but that is not the case. It helps if people who attend the exhibition are familiar with the near universal cultural touch points used in the headlines and visuals as well,” Gaines says. “I think that people who deny racism altogether, may be too closed minded to be taught otherwise merely by viewing one exhibit. However, I think these pieces can be eye-opening to people who have not themselves experienced racism. This can also be a wakeup call to people who feel that we are in a ‘post racial society.’”

Maggie Williams, copywriter, says that, as a white millennial, she feels there is a disconnect between past and present.

“In the ‘90s, we were taught that it was a battle that had already been won in the ‘60s, but that argument is clearly indefensible,” Williams says. “In the wake of George Floyd’s murder, we wanted to create something with as simple of a message as possible that could be used to sharpen peoples’ awareness of the ongoing struggle for racial justice. So this isn’t a comprehensive look at the state of racism in the United States, but it is a framing device for understanding it.”

Williams says that she hopes a message people take away from the exhibit is that legislation is not the same thing as justice. “When a law like the Voting Rights Act, for example, gets passed, we cannot reasonably expect that within two generations the conditions that made the law necessary have disappeared,” she says.

“I would like to give a huge shout out to the anti-racist organizers and protesters out there in the streets, sometimes risking a lot, to carry the message,” she adds. “They are the reason we know about George Floyd, and all of the others. They are the reason this work exists.”