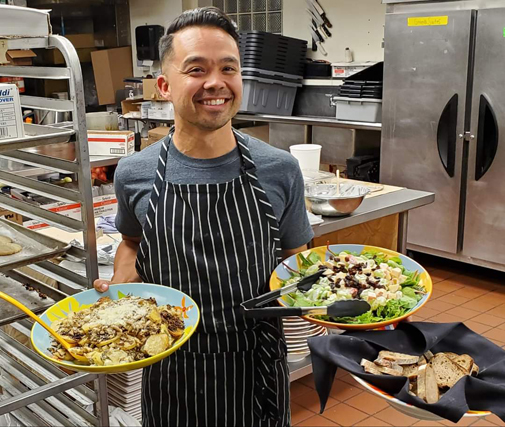 The Concept: Turning the soup kitchen on its head

Amidst a Minnesota snowstorm, Kenny Beck couldn’t get his car started and was hitching a ride with his friend Anna Wienke. She told him about an idea she had for a restaurant. At the time she was working at an upscale steakhouse and volunteering in a soup kitchen. She noticed that people would come through the line, looked down, grab their food, then walk away to sit alone and eat.

One night she decided to try something different. She grabbed the other volunteers, pushed tables together, and served them like a restaurant. Instantly their eyes lit up as a client needing a meal turned into a guest. The engagement flipped the atmosphere and changed the ambiance of a dreary experience into a communal gathering. “She pitched it to me,” and Beck said, “let me know how I can help.” They assembled a board of directors, with Beck as the treasurer and started a non-profit.

It took several months but the team was able to do enough fundraising and secure a location. Provision Community Restaurant opened in October 2019 with a come as you are, give as you can model. Anyone is welcome whether or not they have the financial means to be there. Sitting at a community table, “you’re going to be seated with people that you don’t know necessarily,” explains Beck.

The food is served family style “so people are passing and engaging, creating conversation and community within the restaurant,” says Beck, “we’re trying to create that dining room experience. Where folks can sit down, have a nice hearty meal that looks good, tastes good, and is nutritious.” Provision has two dinner services, at five o’clock and seven o’clock that can accommodate about 20-25 people each.

Provision’s mission is threefold, to reduce food waste, alleviate food insecurity, and decrease social isolation. It’s said that 40% of all food that is produced goes to waste. To help reduce that waste, Provision receives donations of food surplus from various sources like restaurants, grocery stores, and bakeries. To keep it from going to landfill, Provision will turn it into a meal.

It’s also said that one in seven Minnesotans go to bed hungry each night. Some that struggle with food insecurity don’t feel comfortable going to places like soup kitchens or food shelves, and if they do they might not be nearby. Like Anna experienced, those types of places are typically filled with lines of people, aluminum tins, styrofoam plates, and an overall gloomy solo experience. Made all the worse by the pandemic, Provision aims to bring people together and build connections to keep its mission going.

Beck has always worked serving in restaurants until he found his love of cooking. As a server at a prominent Minneapolis establishment, they required that he knew every ingredient of every dish and where they were sourced from. “That was the first time that I started paying attention to ingredients and thinking okay, that’s really not that hard. You don’t have to buy everything, you can make it from scratch.”

Beck also has a long line of excellent cooks in his family where friends would profess the great impression of this mother’s meals. He has taken that natural ability and desire to continue to impress to build a meal based on what Provision has available. He’s been the head chef from the beginning but now Beck will be taking over as Executive Director at Provision, “the idea of running a kitchen is not scary, by any means.”

The Future: Many cooks in the kitchen

Unfortunately, Provision had to suspend operations temporarily. However, Beck has a recipe to get things cooking. “My hope is to be able to get more people aware of our concept, to work on fundraising and grants, and to secure some partnerships to really build this thing.” The goal is to grow and duplicate the model in other neighborhoods, suburbs, and cities so that those who are food insecure will have an option in their own community.

Provision also rents out it’s kitchen space to small food related businesses. “While they’re with us we’re helping to mentor them and build them up and give them the tools that they need to be successful,” Beck says. Having the various partners in the same space allows them to communicate and work together and build ideas off each other. Beck hopes to capitalize on those relationships to provide cooking classes or chef exhibitions to add another layer of engagement and fundraising to further Provision’s mission.

The Re-Launch: Dinner is served

Since Provision has had a bit of a bumpy start, they plan to hold a large fundraiser this May, followed by a soft launch of a cafe operation in preparations for the official grand opening in June. The Provision Cafe service won’t have set times but provide a space for people to come hang out, have coffee, grab a bite of what’s available like pastries, sandwiches, or a small meal. As long as gathering restrictions loosen up, they will return to their family style dinner service model.

For those that want to help the best thing to do is to volunteer your time and your connections. Although appreciated, attending a dinner and making a financial contribution for the night or small donations of food aren’t very lucrative for feeding a crowd. Beck says they’d love for people to offer services helping with operations, the space, and preparing the food. Most importantly, “taking Provision back to their work, their friends and family, and getting us connected with donors and grants or other groups within the industry that are looking to assist.”